The nascent National Unity Platform (NUP) has declined to join the Interparty Organization for Dialogue (IPOD), a forum which brings together parties with representation in Parliament to dialogue on issues affecting the country.

NUP was invited together with the People’s Progressive Party (PPP) to join the organization after the expiry of the 3-year MOU which member parties had signed before NUP was formed. Surprisingly, the NUP Secretary-General David Lewis Rubongoya, wrote to the IPOD secretariat communicatiung that they were declining to join, alleging that the platform has been “used to legitimize a brutal regime that has no regard or respect for democracy.” He described the forum’s meetings as “tea and photo” opportunities.

Previously, it was FDC boycotting IPOD activities, their reasons including that they didn’t want to shake hands with President Museveni who usually attends in his capacity as National Chairman of the National Resistance Movement (NRM).
Last year, FDC’s chair at the summit remained empty, symbolically representing its absence from the table of men. As we talk, FDC is paying for its mistakes, with its base steadily getting eroded because all potential allies see them as arrogant and uncooperative.

At the time, I predicted that in a few years (if not before this year), FDC would be a limping shadow of its former promising self, and take on the mantle of a “sick man of Uganda’s politics”; isolated, defied, desperate and obsolete. I believe I was not far off the mark as the party has shrunk considerably, losing place to NRM and NUP in its former strongholds. I also based on FDC’s stance on IPOD to predict that opposition agitators for a single front by the opposition at the general election should forget it because a seed of discord has been sowed.

When FDC boycotted the summit at Munyonyo, DP’s Nobert Mao, JEEMA’s Asuman Basalirwa and UPC’s Jimmy Akena attended. FDC made fun of them and claimed they were in bed with NRM. Such remarks were an affront on the dignity and rights of the other parties, and also an attack on the collective agenda to develop and grow multiparty politics in Uganda.

IPOD is not a private enterprise of any one individual or group but a forum for discussing matters of mutual interest. It’s also a forum for raising some of the concerns that abstaining groups raise on the streets and in the corridors.

NUP is making the same mistakes as FDC and will live to regret. An attitude of self-importance and self-isolation is selfish and self-seeking.
NUP is showing too early that they are not for unity and that they despise the efforts of other players. They are playing a defeatist game; they claim to have a lot of grievances but cannot come forward to table them formally for solutions to be found. Who did they consult before deciding to boycott IPOD? Why not recall its MPs since it is by virtue of their presence in Parliament that it qualifies to belong in the body? Why not completely relocate from Uganda since the Museveni/NRM they loathe so much is present all over the country? It is not enough to avoid him at in IPOD circles.

Among the key benefits of belonging in IPOD is receiving a share of funding under its arrangement to support their activities. Is NUP turning down this support or they will only go for the buttered side of things? I will follow up to see how they will reconcile themselves on this-even FDC.

NUP’s level of intolerance is very worrying. As a young party, they would set a good example by promoting politics of dialogue and reconciliation. It is possible that other having representation in Parliament, they have not put together a proper political programme to sell in the political common market, and this worries them that they may be overwhelmed by the superior programs of NRM, which has majority MPs, and DP, or even FDC, or UPC, which are more established and experienced.
NUP should style up and act with maturity if they are to set an example of how they want others to treat them.

NRM has its own grievances and is committed to democracy and dialogue as part of its contribution to a better Uganda. Whoever has grievances should table them for consideration among peers instead of gossiping about them in the media- and to foreigners.

Museveni, whom the opposition loves to hate, remains a most valuable partner at every turn in support of democracy and has also been very warm and supportive of IPOD which can be a springboard for dialogue between all political groups-not just parties represented in Parliament-so that the polarization we have witnessed of recent does not escalate, but NUP cannot see because their politics is amateurish and lacks ideological depth. If any group needs the auspices of IPOD, it’s NUP!

The problem is that some of the opposition players are so uncooperative and arrogant yet they accuse Museveni/NRM of the same whereas facts disprove their claims.

The author is a Private Secretary to H.E the President in Charge of Media Management 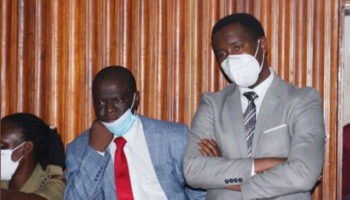