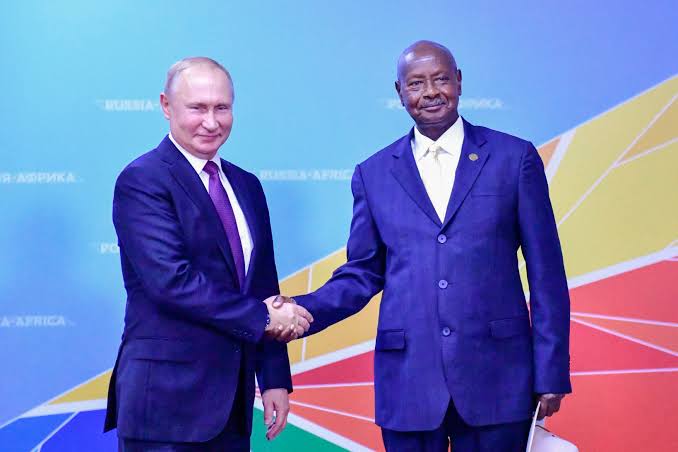 President Museveni has said that government is engaging other oil refiners to sell to Uganda oil instead of negotiating with ‘friendly’ Russia for cheaper oil.

He says even as other countries like India have chosen to ignore Western sanctions against Russia and negotiated for cheaper oil, Uganda has avoided such negotiations because she’s also an ally of the US and Western Countries.

“Instead, we’re intensifying diplomatic contacts quietly to resolve the whole issue. In the meantime, without yet talking to friendly Russia, we’re talking to other oil refiners to sell us cheaper oil-eliminating middlemen who add as much as $50 per tonne on the cost of fuel” Museveni says adding that Uganda’s oil will start flowing in 2025.

He said his government avoided taking sides in that conflict because according to him, this war would have been avoided, a position his government has privately put to those involved.
Museveni said currently, government has responded to the issue of shortages by intensifying irrigation so as to immunize the country’s agriculture against the unreliable weather patterns. Museveni said the shortage of commodities were partly due to poor rains of the past seasons.

“We’re also intensifying efforts to produce products like palm oil that is used in the manufacture of soap instead of importing it from Malaysia and Indonesia. Therefore, while imported items will be scarce, our own locally produced items will be plenty” he said, naming some of them including bananas, maize, millet, beans, beef, milk, fish, chicken among others.

The president however, warned that these may be expensive because of the petrol that is used to transport them but (at least) there will be no shortages in supply.
Museveni noted that even during the festive season, the prices for some of them like beef remained stable fuel prices not withstanding.
“This could be because of some element of speculation by goods and services providers; they unnecessarily raise prices and when customers stay away on the account of high prices, they are forced to lower the price and still, make profit. This means they were just too greedy to make super profits taking advantage of the situation” he explained.

The president assured the nation that even as the global conflicts continue, government is not folding it’s hands waiting for them to end so that fuel prices can go down.
He said Government has embarked on plans to shift from fuel powered cars to electric cars, motor cycles.

“We agreed with some investors to take away the petrol/diesel ones and give the owners electric ones. The government is going to license the investors to operate charging stations where electric batteries will be recharged. The investors will recover their money (swap) through this arrangement. The swap will save the motorcycle operator 50% of the cost” he said.

The president said the shift in transport vehicles is not targeting only motorcycles but also buses, cars, mini buses, trucks among others manufactured by Kiira Motors and METU Katabaazi and others.

On the issue of crime, Museveni assured Ugandans that there’s no terrorist group that will defeat Uganda’s security forces. He said in year ending 2022, terrorist groups operating in Mityana, those who attacked Gen. Katumba Wamala, Bijambiya groups in Masaka and the ADF group that entered Ntoroko district have all been dealth with some being put of of action and others arrested facing prosecution.

“The ADF cell that attacked Gen. Katumba when they killed his daughter and another person, 3 of them were killed and 9 others are in prison. Recently, we have seen childish form of actions by the anti-NRM elements which also shows their desperation. This is the cutting of electricity pylons. This shows the bankruptcy of these groups. How can anybody cut electricity pylons in Uganda and we fail to locate him or her? Stay tuned, you will hear interesting news on this” he warned.

Is Corruption In Uganda A Class Struggle?
By Peter Magomu Mashate