Why AU Meetings Are Now No Go Area For Gen. Museveni Ministers! 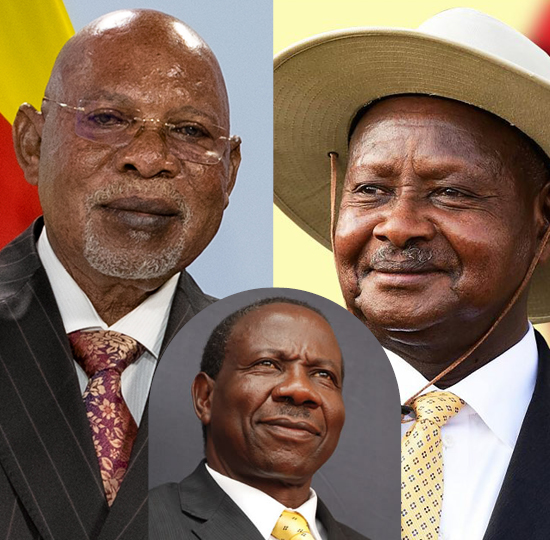 Currently, any Ugandan delegation that claims to have attended meetings organised by African Union (AU) needs to be checked properly upon return to see whether their reports are not forged!

This is because, such meetings by AU are for now, allegedly a no-go area for Uganda’s executive or any of its high level officials.

“Even if you hold a meeting and provide everything free of charge, no Ugandan official can step into AU meetings. Not even a minister” says a top inspector, explaining the state of affairs at the Addis Ababa-based continental body!

Whereas Gen. YK Museveni is seen as the champion of African integration by his fellow heads of state, back home his own officials are allegedly sabotaging his work.
As we talk, the country’s flag at the AU headquarters in Addis Ababa is not flying around unlike those of other countries.
As if that isn’t embarrassing enough, the president or any of his ministers may not attend future meetings under the auspices of African Union.
And yet, there’s an impending big meeting involving presidents sometime early next year. But where is the problem?

Uganda is a member of the African Union. Our Inspectors revealed that Museveni issued a standing order to his ministry for finance and that of foreign affairs that Uganda should not at any moment ever default on the subscription for AU membership and UN.
He said according to Inspectors that all other things can wait, but no one should ever fail to pay that subscription for strategic reasons.

However, as we talk now, the country has allegedly defaulted on paying it’s subscription to AU, the reason none of the Ugandan officials can dare step in any meeting for AU due to sanctions.
The first casualties for this non-payment of dues are ministers for finance Matia Kasaija and his counterpart in trade and industry Francis Mwebesa!

We have it on good grounds that the duo recently got invites to attend a high level meeting in Niamey-Niger. The meeting ran from November 3-5 2022 and the duo were supposed to travel with some key technocrats to participate in some technical meetings.
It was an all-paid up trip sponsored by Africa Export Import Bank (Afreximbank) through the AU.
The meeting was supposed to give a platform for countries to interface directly with multinational financial institutions including AfDB, Afreximbank, among others which want to help African states push through national industrialization agenda. (This is exactly what Gen. Museveni had always craved for emphasizing industrialization as a magic to spur Uganda’s Socio-economic transformation)!

Inspectors revealed that prior to this meeting, the President of Niger who highly respects Gen. Museveni given his love for Pan-Africanism and him being a senior in state management, allegedly made efforts to reach out to the man from Rwakitura by way of delivering a Special Message to him.

We’re informed the head of state (Niger) henceforth dispatched one of his special envoys to deliver the message to Museveni. The man we’re told camped in Nairobi as he worked out his phone trying to connect with State House to book an appointment with Gen. Museveni.

However, this allegedly failed and he flew back to Niger. On reaching there, the head of state dispatched him again and this time, the gentleman camped in Addis Ababa as contacts with Kampala were being made to enable him come and see the president to deliver the message.
“It’s not clear what was therein the message but I suspect, the other president wanted to alert his senior (read Museveni) about the situation at AU in light of the November meeting. Secondly, being a new person in the chair, maybe he wanted to draw some lessons from the son of Kaguta” says an Inspector.

Inspectors said true, state house was contacted and informed of this arrangement and therefore, it needed to arrange so that the gentleman could deliver the special message. However, this attempt also failed flatly forcing the man to return to Niger.
The last chance for the authorities in Niger was to wait for the November meeting where it thought that given the level of attachment Museveni has in African industrialization, he was either going to attend himself or he was to send his Vice President Maj. Jessica Alupo so that the message could be relayed under that arrangement. This again flopped because even as the meeting on industrialization was fully sponsored, no minister attended or any representative from Uganda! Although no one has offered an explanation for this no-show, our Inspectors got it!
Why?
Apparently, the ministers wanted to travel and had actually prepared their laggages but changed tact at last minute after being alerted that they were going to gatecrash the meeting!
“Not that they weren’t invited, they were unwanted in the meeting on technical reasons. Uganda hasn’t paid it’s dues to AU and that’s why it’s participation in any AU meeting is now very impossible. It’s a big embarrassment we’re facing as a country” says an Inspector.

To prove that Uganda is properly blocked from the meetings, we’re informed the organizers now print out names of countries and pin them on the conference venue. This is followed by flags.
“Once you don’t see your country on the list, you don’t access the meeting even if you have an invite. Your delegation will be allowed to sleep in the hotels but will return home empty handed. As we talk, our flag has been removed because of non-payment of subscription” says an Inspector.

Inspectors said now that Uganda is facing a lot of negative publicity by some individuals, this is the time the minister for foreign affairs should be visible in all meetings at continental level to fix things.
Secondly, Uganda’s influence on the continent can only be pursued when the foreign minister is ever attending important meetings of AU alongside other dignitaries.

“We really don’t know what’s happening to our good General JeJe. He has never attended any serious meeting of AU. What makes a country in Africa, is your (ability to) influence. (As a minister) your voice should be loud and clear among your fellow ministers. They must know you. The other day he went to Japan, he did better. Gen. JeJe needs to come out of his shell because we know his ability to perform ” says an Inspector.

We have been informed that even as other Museveni ministers attend other sectoral meetings on the continent, Uganda is going to lose out on the outcome of those meetings especially if their resolution implementation has to be adopted at AU level.
“The other day I saw justice minister Norbert Mao attending a meeting but who’s going to put these before AU if we’re being chased away? We can’t attend! How can we fail to pay AU subscription? It’s a shame to us as a country and to our president. This could be an indirect strategy to destroy Mzee by his own people” says an Inspector.

Our Inspectors said for now, Uganda can’t attend anything like AU summit which unfortunately is a meeting of Presidents, AU Extra Ordinary meeting/Council of Ministers which is a meeting of ministers or any other meetings because of the sanctions arising from failure to pay AU subscription. Shockingly, Uganda is a member of AU Peace and Security Council, a position it fought hard to achieve alongside DR Congo, Zambia, Kenya among members totalling 10. Watch the space!