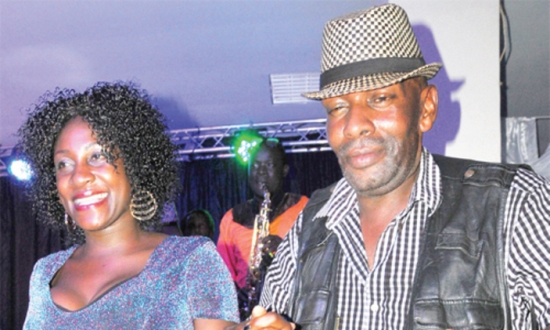 Allan Kanyike with singer Sarah Zawedde during his happy times

The Kampala social scene is locked in shock and pain of unimaginable proportions following news of the death of popular city party animal, Allan Kanyike aka the Dynamite.

Reports indicate that Kanyike, 62, succumbed to brain hemorrhage Thursday afternoon at Nsambya Hospital where he had been admitted in the ICU. A jolly Ugandan, Kanyike epitomized perfect life of retirement after he revealed that he afforded to party throughout because he had invested wisely and saved for his retirement and old age when he was still actively working.

He revealed that he got his seemingly inexhaustible money in the UK where he worked as manager at Queensbridge Management Ltd, a real estate management company for 25 years.

Born in Fort Portal, Kanyike was born in a life of comfort to henry Kanyike. He spent his formative years of education in Kenyan schools before returning to Uganda to do his O levels at St henry’s Kitovu where he was classmates with Katikkiro Charles peter Mayiga.

Despite living a very active social life, Kanyike has largely been a scandal-free man. He most recently went into the news when he threatened to sue city bloggers who had mistaken his partner with a crossdresser who went viral for being more beautiful than many women. May his soul rest in peace!