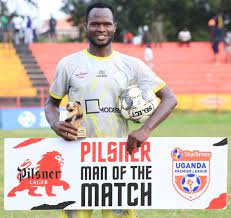 Despite a good run in the league, Alex Kitata missed out on a CHAN call-up

On Tuesday Uganda Cranes Coach Milutin Siredojevic aka Micho summoned a 35-man provisional squad to prepare for the forthcoming African Nations Championship (CHAN). Quickly thereafter, however, local football enthusiasts realized that his team was short of any of the league’s current top scorers led by Nelson Senkatuka of bright stars FC and Maroons’ Fred Amaku who both have seven goals. These are closely followed by five others including Alex Kitata of Gaddafi (6goals), Yunus Sentamu of Vipers (6), Allan Kayiwa (5), Ibrahim Kasule (5) and Karim Ndugwa (5).

Micho’s snub of strikers shocked fans, with many advancing all sorts of theories to try and explain this weird selection.

High among the theories was speculation that the team had been selected by powerful godfathers and agents of many of the selected players. These, angry fans alleged, want to use the strong scouting potential of CHAN to market ‘their’ players. It was therefore said that the top scorers who were snubbed were paying the price for lacking strong godfathers in positions that matter. As a result, angry fans compiled a list of the Uganda Premier League’s top eight strikers and made it viral, juxtaposing the same with the list of Micho’s summoned “strikers”.

It is now evident that the fans’ frustration sank deep into Micho’s ears. It is worth noting that ever since he returned for a second stint with the Cranes, Micho has been harshly assessed, with many analysts suggesting that he hasn’t performed to many Ugandans’ expectations. His results, reports show, have been a far cry from those he posted with the Cranes squad which he inherited from Frenchman Sebastien Desabre and took it to back-to-back Afcon finals. Many fans have attributed his struggles to his pragmatic safety-first philosophy which has seen play a highly defensive game which yields less goals. The same assessment went viral on Tuesday, with fans football purists already predicting doom for Micho’s ‘strikerless’ team.

It is highly believed that it is such condmnation which arm-twisted Micho into a last minute save-face late inclusion of UPL top scorer Nelson Senkatuka onto the team. Senkatuka joined the squad and was part of the group which trained Thursday morning at the MTN Omondi Stadium, Lugogo.

And explaining the sudden change of heart, Micho said that injury concerns forced him to summon senkatuka as a backup. Micho said senkatuka was part of a40-man list from which they had drawn the initial 35 call ups.

“When we made the team, we submitted 40 names and on the 40 names, we announced 35 names on Tuesday. And it is the 35 names that have brought us to the start of training today but when you immediately get injury concerns of Milton Karisa and Siraje Sentamu, you have to look into the reserve list of the five players; and we have gone with the first name which is Senkatuka,” Micho explained.

He added that Senkatuka was an easy pick from the remaining 5 reserves because his name was a long time ago submitted for the visas to Tunisia and Algeria. “We know his capabilities and he is in line with Frank Sebuufu, and Cromwel Rwothomio for the number nine position, and maybe in addition to those three, Rogers Mato and Milton Karisa may come in,” he said.

This year’s CHAN outing will be the 6th time the Uganda Cranes are aimimng to go past the knockout stages of the continental tournament which is meant for only locally-based polayers. The cranes’ previous five attempts have ended in ‘premium tears’. Cranes look to have a humongous task, however, with the draw pitting them against African soccer powerhouses Senegal, Ivory Coast, and the Democratic Republic of Congo in Group B.

And with Micho being constantly berated for his pragmatic safety-first approach, it is not surprising that he had completely overlooked proven strikers. The only solace for fans, however, is that this time around their loud voice of discontent finally summoned a striker for Micho!