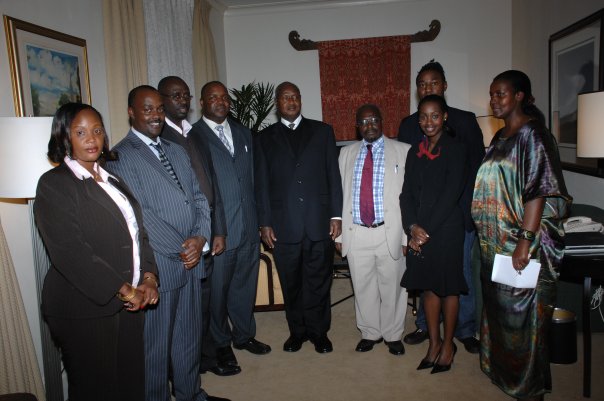 The NRM Diaspora League leadership squabbles have reached a worrying trend with rival factions hitting each other with rotten eggs.
This follows accusations by Hajji Abbey Kigozi Walusimbi against one of the NRM UK chapter members Patrick Asiimwe whom he blasted for bringing confusion in the league. The Inspector reached out to Asiimwe and hereunder are excerpts.

PA: Who is Hajji Walusimbi and whose interests does he represent in the party? He was thrown out of as chairman and I was elected.

Qn. You’re talking about someone who out of his service as NRM Diaspora League Chairperson, the president recently appointed him as a Senior Presidential Advisor on Diaspora Affairs.

PA: No way. Actually, I can say even Catherine Kusasira, Butcher man of Full Figure are better than him because at least for them they were appointed but for him, he’s just masquarading. He has never shown us his letter of appointment. We have asked for it but he has none. Every member of the league has disowned him. He thought by calling himself that title he can con some ignorant people. Walusimbi is a terrible guy. Everyone should be careful of him.

Qn. How do you justify your claims? Do you have evidence?

PA: If you want to know him well-I believe you’re a Muganda. Go to Mengo and ask them about him. He was disowned by Mengo because of his misdeeds. They don’t want him to step anywhere there. Imagine Mengo a well established institution! They threw him out. The same thing with NRM chapter in the US. Thats why he’s ever in Uganda. That position of advisor I can tell you, some people simply exploit Museveni’s generosity. Walusimbi saw that since Hajji Abdu Nadduli had lost clout, he saw a vaccum and rode on the Muslim ticket.

Qn. You mean he’s even disliked in the US chapter where he stays?

PA: Oooooh, he was thrown out badly. He’s out completely. That man is a proper conman.

Qn. Hajji told us that you’re the one causing problems in the UK chapter.

PA: I am the one who started this chapter. How can I be the same person to disorganize my own kid? He’s the one disorganizing chapters. He disorganized that of Turkey until I went there to put things right. He did the same to that of Egypt. The members rejected him. He went to South Africa and created three factions. One in Darban, another in Johannesburg and another in Capetown. He destroyed the one in Rome, Netherlands and Holland. All these, it’s me trying to put things together. And by the way, I am using my own resources.

Qn. What is it between you and Hajji Walusimbi?

PA: I don’t have any personal problem with Walusimbi. I was elected in 2016 as NRM Diaspora League Chairperson. He just needs to contend with the changes. I know he has no job and he was using this position to con people. Me I am a barrister. I practice law here. So, he saw this as a source of income. But some of us see this as a contribution to the party and the country. We see leadership as something extracurricular.

Qn. But why are seeing squabbles particularly in the UK chapter? The other day, someone went and registered it as a limited company and you didn’t say a thing.

PA: You know COVID-19 created some challenges. The lockdown created a vaccum. People like Walusimbi exploited it to claim that we’re not working. Secondly, at some point, I also fell sick and went into comma for about six weeks. I was actually about to die. God was simply on my side and I managed to recover and I am doing my professional work here. But around that same period, people tried to do all sorts of things but I can say that, the one who had registered the company has dissolved it. They deregistered it.

Qn. In just one word, how would you describe Hajji Walusimbi?

PA: He’s a distinguished conman and everyone knows him for that. Everyone has disowned him including Mengo. He’s a kind of a guy who can take you to a bus park and he leaves you there after taking your fares.
Walusimbi sees me as a major threat that’s why he fights me. He thinks if he fights me at UK chapter, I will not be able to topple him. He didn’t know that I am already loved by everyone and that’s why most of the diaspora members contributed towards my treatment just like the president did also. I spent the whole of 2019 in Uganda getting treatment. This is the time Walusimbi and that woman exploited it to do their own things. Actually, some NRM people thought I would never speak again or I would become a kasiru. But thank God, I am back to normal and going about my proffesion.

Qn. What’s the way forward in light of what is going on?

PA: We’re already okay. The squabbles were being brought by Walusimbi and his group. He sent many people here to disorganize us. We’re now already cleaning up. All those factions he created are now behind me because there’s no good in being divided. We have to be united for the benefit of our party and country. It’s only Walusimbi who benefits from our disunity.

Qn. Are you saying if Walusimbi ever comes to UK for NRM meetings you won’t allow him?

PA: He comes as who? No way. He can never. He’s already unwanted by US chapter. He can never call any meeting here.