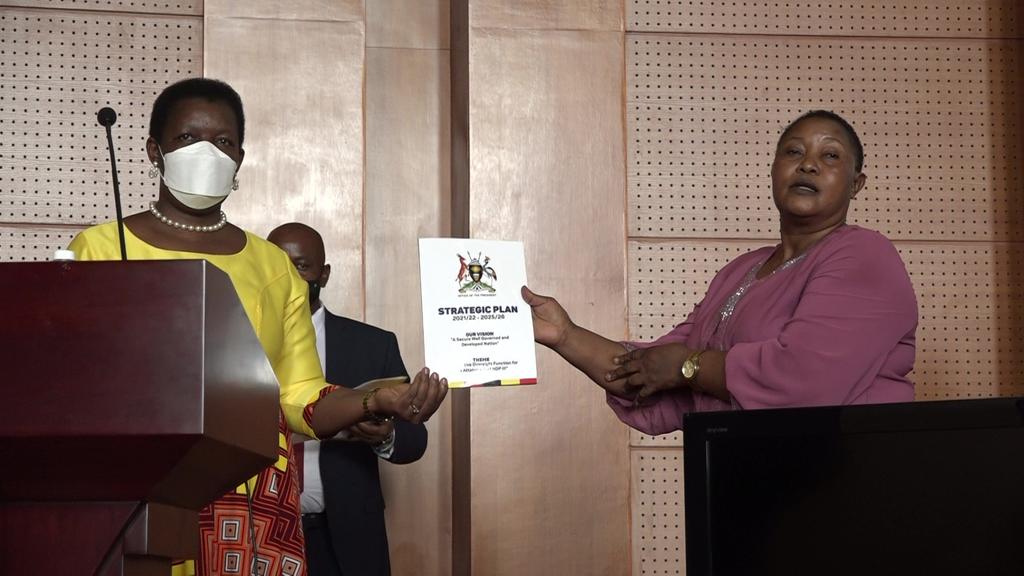 As she promised in her acceptance speech, Minister of Presidency Milly Babirye Babalanda has cracked the whip on Resident District Commissioners whose service posts have been lately dogged by issues of inefficiencies.

The first casualties of the former Personal Assistant to the President include veteran Masaka RDC Fred Bamwine and Nakawa division’s deputy RCC Herbert Anderson Burora. According to information released Monday, Bamwine was moved from the volatile Masaka district to Nakaseke district while Burora was transferred to Lubaga division in Kampala.

Whereas by press time no reasons had been stated for these transfers, analysts revealed that the two men were moved due to perceived inefficiency, which Babalanda warned the RDCs against.

It is worth noting that for months now, Masaka district has been gripped by terror of machete-wielding murderers now commonly known as ‘bijambiya’.

Apparently, up to now government is yet to put an end to the killings, although police have since linked the murders to land disputes; making several arrests.

Locals however expressed dissatisfaction over what they termed as seeming reluctance by the district security forces to protect them. This was upon reports that the assailants throw leaflets as well as making phone calls to potential victims before going ahead to kill them.

Ideally, such concerns are supposed to be directly addressed by the RDC, who is the overall head of security matters in the district.

It is this responsibility which caused trouble for Bamwine as the failure to make inroads into the murderers fell directly upon him. Last week, a likely lack of command and authority on Bamwine’s side manifested when Paul Nkore, the Southern Regional Police Commander, admitted to residents that the security personnel in the district were too few and powerless to offer them reasonable help. Nkore made the remarks while addressing residents of Kyabbogo Village before urging them to strengthen the neighborhood watch system which police introduced some years ago to curb crime.

A visibly frustrated Nkore even went ahead to blame residents for frustrating security personnel by not reporting criminals yet they know them. Blaming himself, Nkore said; “I have just been posted to Masaka where I have spent barely one month but to my dismay, a person is killed every day. I am starting to blame myself for coming here because it seems I brought kisirani (bad luck) to this region.”

Nkore’s defeatist statement was unfortunately picked on by opposition elements, with NUP boss Bobi Wine urging Masaka people to fight on their own because government cannot help them. Later the opposition party’s spokesperson Joel Ssenyonyi poured scorn at government, saying that while Nkore claimed the security personnel were overstretched, the government would have deployed more than enough men had it been an operation to stop Bobi Wine and his NUP supporters.

Sources close to minister Babalanda say that with government and the NRM’s image getting soiled, there was no way Bamwine would have survived in Masaka.

Bamwine’s chances also thinned after the soft-spoken but overly workaholic Babalanda heaed to masaka to have a firsthand appreciation of the problem. Babalanda revealed that she would camp in Masaka from Thursday, September 2 to Friday, September 3, during which time she will assess the crisis and also provide important tips to the security apparatus (including RDCs/RCCs, District Internal Security Officers, and other district police chiefs) on how to combat the situation.

The Minister attributed the terror to wrong elements fighting to portray the government as incompetent with the intention to cause panic among the public.

She said; “These terror groups want to frustrate our efforts in implementing the NRM manifesto. They are desperately fighting to divert us but I can assure Ugandans that the government can wipe them out without any trouble.”

Babalanda’s whip also landed on Nakawa Deputy RCC Burora and sources attributed this to his recent disclosure that he had found it difficult to enforce curfew and Covid-19 movement restrictions due to patronage and political sabotage by mainly Banyankore big shots in government.

Speaking on a TV talk show, Burora decried that the Banyankore big shots had turned a phone and a Runyankore statement Gamba n’ogu (speak with this one) into a movement permit of sorts which always came to play each time his men arrested people violating Covid-19 guidelines as issued by the president.

Sources say that with that particular clip having gone viral on social media, it depicted Burora as having failed in his duties in Nakawa, thus warranting his transfer to another area.

It should be noted that earlier in July, Burora was in the spotlight after he was defied by his boss as well as the managements of forest mall and Shoprite at Lugogo. This was after Burora ordered the closure of the two places for violating Covid-19 SOPs. However, the two places remained open and Burora was only vindicated recently when revelers were arrested partying and boozing at Forest Mall despite the closure of bars.

By press time, word had it that more transfers of many other RDCs were in the pipeline as Babalanda aims to make good her promise of cleaning up the presidency ministry. It should be remembered that while assuming the office of the president from her predecessor Esther Mbayo, Babalanda warned RDCs that party time was over as her tenure of office would be only for selfless and efficient service to the Ugandans.

She noted that her stint at the Kyambogo-based Office of the NRM National Chairman (ONC) where she diligently served as the poffice’s administrator and Special Political Assistant to President Yoweri Museveni had given her adequate interface with RDCs and so she knew exactly what she wanted from them. She revealed that she had learnt from this experiemce that many RDCs were plagued by laziness and incompetence, which things she said she would not tolerate at all as they are against her ethos of servant leadership.

“During my countrywide service delivery monitoring tours in my capacity as Personal Assistant to H.E the President; I interfaced with many RDCs and members of the public, and I identified several gaps including lack of focus, laziness, and indiscipline by some RDCs. It was also noted that some RDCs are not cooperative and they lack commitment,” she said.

To ensure efficient service therefore, she issued RDCs with a blueprint of guidelines that they should follow while executing their duties. These include: