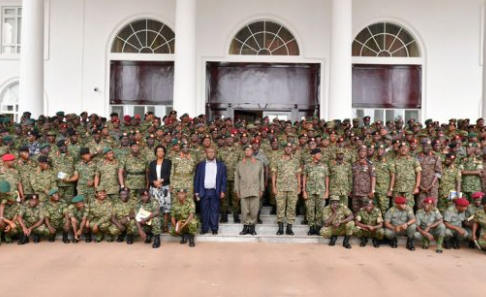 The army’s recent decision to retire over 600 officers and men from the armed forces didn’t come as a surprise.
We have established that more such general retirements and desertions are feared to happen following the deployment of Lt. Gen. Muhoozi Kainerugaba as the commander of land forces.

Apparently, those in the know suggest that president Museveni’s decision to deploy Muhoozi to the mainstream UPDF was premised on the fact that the forces were allegedly fatigued and therefore needed to be awakened to match the level at which the Special Forces Command was moving.

“Currently, the SFC is overstretched. It’s into guarding the fountain of honor, the strategic installations, oil wells and many VIPs. This is good but the numbers don’t match the level of demand. It therefore, means the UPDF also has to be equipped with proper training to develop it’s capabilities in order to reduce on pressure on SFC” sources explained.

Sources said that as a result, Gen. Muhoozi’s main work is going to ensure that the soldiers are properly trained and do the necessary exercises unlike in the past when there seemed to be laxity in regular exercises.

“The cases of indiscipline we are seeing among soldiers are rare among the SFC boys. Can you imagine a soldier picking a gun to shoot people because of a woman? These are things that point to lack of proper training and maybe being idle. Soldiers must always do exercises to keep them fresh and ready for deployment regardless of the situation” the sources added.
We are told out of this task, it is feared that many soldiers are going to be retired especially those who are weak and those will not manage rigorous training as ordered by Gen. Muhoozi.

“Don’t joke with that guy. We know him and how he has been treating us (SFC). He likes training, and training. Everytime, he wants you on training. I can assure you, you’re going to see many people seeking to retire from the army or desertions. They will not manage his work method in respect of training” the sources explained.

We are told Museveni was alarmed to see that several UPDF bosses had developed potbellies and others falling off like cockroaches even with minor ailments, an indication that many of them are unfit due to lack of regular training.
We have been informed that Muhoozi is supposed to tour all units and in the process, he will be screening those with capacity to be soldiers for more years.

“Those found wanting due to excessive booze or weak will be presented for retirement. The force will retire them all. And those who will remain must be ready for training” sources explained.
The army a fortnight ago retired over 600 officers and men from the forces. Among those retired included bush-war generals Ivan Koreta and Pecos Kutesa.

Whereas, it was understandable for the retirement of bush-war heros due to age, other retirees had other issues that resulted into their ‘go back home’ directive. The UPDF court-martial has on several occasions held court sessions to discipline some of it’s officers who use the gun the wrong way. Some are accused of killing innocent people because of civil matters.

Muhoozi Kainerugaba has been the commander of the SFC, a force he helped build alongside other commanders like Gen. Leopold Kyanda, Gen. Muzeyi Sabiiti, Don Nabaasa and Mugyenyi Birungi. He was recently posted to head the Land Forces by his dad also commander in chief Gen. Museveni.

Museveni also posted Maj.Gen. Kyanda as the Joint Chief of Staff of the army. Both Muhoozi and Kyanda are close buddies meaning they now have the army under lock and key and can execute any exercise required to make the army more effective. In the recent days, Muhoozi has been cited visiting several units and taking them through rigorous morale boasting exercises. Watch the space!