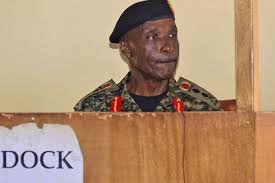 Within the legal fraternity, is a secret debate on whether the Chief Registrar of the High Court will grant embattled former IGP Gen. Edward Kale Kayihura can be allowed to practice law or not.There are schools of thought within the judiciary that Kayihura should be subjected to a one year orientation before he can be allowed chance to stand anywhere in the higher courts.

However, the other school of thought is that Kayihura must be judged from his experience in government and if he performed better, then; the registrar will be free to grant him outright permission to start his legal profession in higher courts.

According to the normal procedure, anyone who wants to be granted practice law at higher courts must have been in practice for at least three years. But for Kayihura, he hasn’t been practicing although he’s a lawyer.”If the Law Council found him to be fit and proper and went ahead to approve his application to join legal practice, Kayihura now must apply to the Chief Registrar of the High Court to enter him on the roll and issue him with a certificate of admission and enrollment” explained a top legal officer.

The officer went on ‘when he’s admitted, he signs the big book of Advocates. BUT, the registrar is at liberty to issue him a certificate that restricts his audience. Unless his service (as IGP) mitigates, he’s bound to have limited audience to the lower court (Magistrate’s Court) for one year.

He will be under a senior advocate’s supervision before he’s allowed in all courts of judicature”The sources added that if the Chief Registrar finds that Kayihura’s service in the police and army is sound and competent, this would be equated to legal knowledge and practice and therefore commensurate with the rules, he would allow him outright access to all courts of judicature right from Magistrate’s Court to Supreme Court.

“He would therefore begin to straight away practice as a Human rights lawyer. But in order to get a practicing certificate, he must go through recognized chambers with a certificate of approval by the Law Council” explained the legal expert.

However, insiders informed us that the lingering questions in respect of Kayihura’s decision to join Human rights advocacy are three:First of all, Kayihura is a serving military officer. It is therefore, a question going on on whether serving military officers can be allowed to join private legal practice. This therefore, means Kayihura’s fate largely depends on the decision of the High Command headed Commander in Chief Gen. YK Museveni.

The other question is whether the Law Council gazetted his name in the Uganda Gazette when he applied to join the legal profession. The name of the applicant(s) is supposed to remain here for 14days to enable the public make comments on whether to allow or disallow the applicant.

The other question going on according to insiders is how the Chief Registrar will deal with his next set of application to be enrolled as an advocate given the fact that he’s facing human-rights related cases in the General Court Martial. Kayihura according to latest reports from Law Council, has been approved to join the legal fraternity as a private lawyer, a development which has sparked off debate.In the meantime, the first son Lt. Gen. Muhoozi Kainerugaba has come out and requested his dad Museveni to forgive Kayihura for his alleged sins against the state of Uganda.

Kayihura is facing grave charges in the army court alongside his former lieutenants in police all of which relate to alleged abuse of human rights. The charges include but not limited to torture, abduction among others. On the other hand, he has since been slapped with sanctions by the United States over similar charges.

He’s currently on katebe after he was fired from police by Gen. Museveni in 2018 and replaced by his then deputy Martins Okoth Ochola.