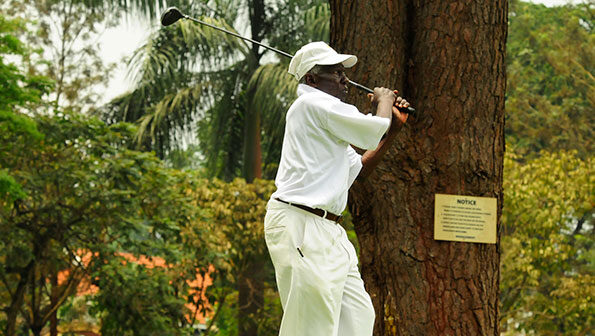 Talking about golf, one would be mean to mention other prominent names without mentioning mzee Basaliza Emmanuel Rusoke!
Aged 96 years old, Basaliza; a resident of Burahya in Kabalore district is believed to be the oldest man on earth particularly in East and Central Africa and also in Westminster still playing golf at a competitive level.

He will be making 96years on Friday this week. His friends in Tooro Gold Club have therefore organized a tournament in honor of his birth date.
He started playing golf shortly after Uganda’s independence since this game was earlier restricted to only whites and Indians before independence.

Several decades down the road, Basaliza is still determined to keep his favorite game alive in him and on the pitch. Just a few days ago, he participated in the Seniors Open Golf Championship and completed his round with a gross of 107. He scored 77 nett and missed being declared winner by a whisker.

No wonder, his participation was recognized by the Uganda Senior Golfers Society and he was awarded with a walking stick. The society however, noted that the old man really needs a cart to help him move easily around the gold course now that his body has started aching due to old age.

Basaliza whom his pals fondly refer to as Kijana, says his friends in Fort Portal have already fundraised for him Shs3.5m towards acquiring a cart. He now needs between Shs8-12m to get himself this cart.
He says for now, he feels tired but he can’t help it leaving golf since it helps him keep in good shape.

“I can’t walk properly now that’s why I need a cart. I must tell all golfers that discipline in feeding, trustworthiness and making friends will make you succeed. If you’re to play a good game, you must be sober” he counseled his comrades as he talked to The Inspector.

A man of all seasons, Basaliza is a retired Veterinary officer who worked in Buganda’s Kyagwe county, Ssingo, Buwekula and in Tooro’s greater Kabalore district. At national level, he was responsible for establishment of Dairy plants all over the country during his stint in Uganda Dairy Development Corporation.
We are told his family and Uganda Golf Union fraternity are interested in sponsoring him to go and play at St Andrews golf course in Scotland considered to be the mother of golf.

In his career, he has made two holes one at Tooro Golf club.
Other than golf he was involved and supported liberation struggles during fighting Idi Amin by supporting Fronasa. He is also a founder member of UPM and NRA/NRM and we can confirm his Mercedes Benz was pivotal in transporting liberators including Yoweri Museveni of that time.

Mzee Basaliza is dad to Col. Stephen Basaliza Mwesige the former MP for Burahya and also former commissioner at UHRC.
He is renown dairy farmer and land lord in Fortportal Tourism city.