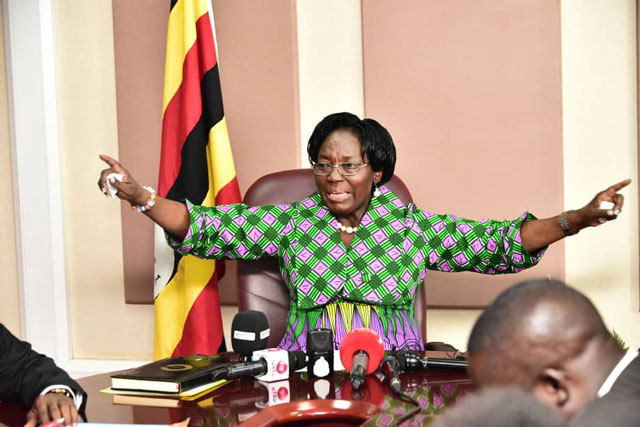 Why Busoga MPs Are Failing To Agree On Caucus Leadership!

For now, political pundits in Busoga suggest it’s now 1:1 between speaker Jacob Oulanyah and his former boss now minister Rebecca Kadaga.
Oulanyah began by thumping Kadaga for the much publicised race for speakership. Oulanyah got 111 votes more to floor Kadaga who wanted to steer parliament for a 3rd term. Museveni would later plead with Kadaga to accept a ministerial position and ended up making her a minister for EAC on top of making her 1st deputy premier.

When this speakership battle ended, another opportunity surfaced during the by-election for EALA MP following the demise of hon. Mathias Kasamba.
Here, according to our Inspectors, Kadaga camp had not paid a lot of attention to it as those who vied for the seat seemed to be incognitos.

However, towards the election date, Intel leaked that one of the contestants Godfrey Kiwanda was being backed by the speaker Oulanyah camp. It should be recalled that Kiwanda all along since 2016 had been Oulanyah’s man and even in the last race, he was among the CEC members who wanted Oulanyah scoop the position.
Immediately, we were told, the Kadaga camp took to political trenches at last minute and analyzed all candidates in the race to see who was more formidable to challenge Kiwanda.

It so happened that James Kakooza seemed to have a better chance if had been backed by Kadaga. Insiders suggest that Kadaga decided to back Kakooza after realizing that the former Kabula MP who had initially been a Mbabazist had left Mbabazi when he decided to stand against Museveni.
And to make matters simpler, when Kakooza lost his MP seat, he made a decision to position himself for EALA race which is due in 2022.

Therefore, inspectors revealed that when it was apparent that Kadaga had put up a spirited fight to retain her position as speaker, Kakooza was among the first group to rally support for her even after knowing that he wasn’t a voter anymore since he had lost election.
“Kakooza knew it well that if he antagonized Kadaga, his chances of getting to EALA were in jeopardy. He knew Kadaga would follow him in 2022 and frustrate his bid. This is why he showed loyalty to her the moment he lost elections. He would convass votes for her for speakership” revealed an insider.

Therefore, when Kasamba died and a by-election came up, the Kadaga camp decided to back Kakooza on the last minute just to humiliate Kiwanda and his camp.
More trouble for Kiwanda occured after his camp commander speaker Oulanyah fell sick at the last hour and at the end of the day, Kakooza carried the day with 11 votes more than those of Kiwanda.
Inspectors revealed that, for Kadaga to have fought Kiwanda, her camp reasoned that if he got a chance to go to EALA, he was going to ‘disturb’ their mistress.

“That man will take his local politics there and start antagonizing our madam. He must fail. At least another person can go there but not that man (Kiwanda)” an insider revealed on the mood leading to the election day. This is how Kadaga secured her first victory over Oulanyah making it a 1:1!

PART III ENTERS
A month ago, Busoga MPs formed a committee to steer the caucus. Here, Bunya south MP Idi Isabirye was elected chairperson of the committee. The MPs allegedly voted in unison and indeed many members rallied the new executive to draft proposals on how to ‘kusaka’ or lobby for Busoga. It’s seems as this went on, the Kadaga camp wasn’t fully aware or it was simply spying on this group.

Henceforth, a few days ago, the Isabirye committee met at Katikati restaurant where they were meant to give a progress report on the some of the action points discussed earlier on.

In the meeting, sources said the committee hinted on a possibility of using the office of the speaker Oulanyah to help achieve there desires for funding. Oulanyah would help link the group to the president.

We are told Isabirye is an Oulanyah man and so were all MPs from his district of Mayuge at the time of election of speaker.
So, it was alleged that one of the executive members (Busoga parliamentary caucus led by Isabirye) identified as Racheal Magoola upon hearing news of possible funding to the group, allegedly rushed at a terrible speed to brief the Kadaga camp on the activities of BPC led by Isabirye.

“Mmwe muli wano naye bali bagenda kufuna ssente” she is quoted to have said which in Queen’s language translates thus ‘guys you’re here but the other group is going to get money’
Inspectors suggested that another member suspected to have been a mole in the Isabirye committee was hon. Yona Kyogera. This one we’re told started his alleged spying antics during the speakership campaigns.
“He was for Kadaga but he kept pretending that he was Oulanyah man. He is the one who used to leak Oulanyah secrets to Kadaga camp” an inspector revealed.

GABULA DAY DEBACLE
On 9th (tomorrow) something big is going to happen in Busoga. The same is on the 13th this month. Their Kyabazinga William Gabula will tomorrow 9th mark his day dubbed ‘Gabula day’ as a chief of Bugabula chiefdom one of the nine chiefdoms that form Busoga kingdom. On 13th, is going to be the Gabula Day for the whole of Busoga.

Now, we are informed, the ongoing squabbles among Busoga MPs is related to show of supremacy among them on who has more clout in the kingdom besides the wars therein parliament between Kadaga and Oulanyah.
It was reported that when the Kadaga camp got wind of the progress report by the Isabirye committee (read pro-Oulanyah), this is how a quick meeting was allegedly summoned at hotel Africana to elect another committee. This is how the Greater Busoga Parliamentary Group came up and surprisingly, appointed three members already in Isabirye committee among the new executive. Of these, included Racheal Magoola!

We are now told that the GBPG is the one that is being positioned for presentation before Gabula as the executive of Busoga Caucus. Now, the Isabirye committee accuses that of GBPG of betrayal because in their modus operandi, it was agreed that no member who has extra work in parliament either as a shadow minister, committee boss or any other official assignment should be on the executive of the caucus. It was out of this disagreement that some senior members allegedly wanted to lead the caucus chose to form a parallel group. But those in the caucus claimed that this ongoing squabble is as a result of the battle between Oulanyah who wants to penetrate Busoga and Kadaga who feels she’s the champion of Busoga cause.

Indeed, Kadaga has been the chairperson of Busoga Parliamentary Caucus for the last 20years meaning that all developmental projects to Busoga, funds donated, monthly contributions by members and accountabilities she knows everything. By insisting on having a friendly caucus leadership, it is natural that Kadaga would want a successor who will not be hostile to her. This is the reason she reportedly handed over leadership to GBPG which is considered to be a friendly force and not Isabirye.

To make matters worse, Isabirye has less time to fight this battle because he’s spending much of his time running in court corridors to defend his seat. For now, his hitherto leadership has been lessened by three members who have since defected to GBPG.
With this kind of infighting, coupled with allegations of financial gaps, it is feared the Isabirye leadership might revenge by exposing some members in the old executive. For now, it’s not clear how this is going to end and who will win round III!
Watch this space!