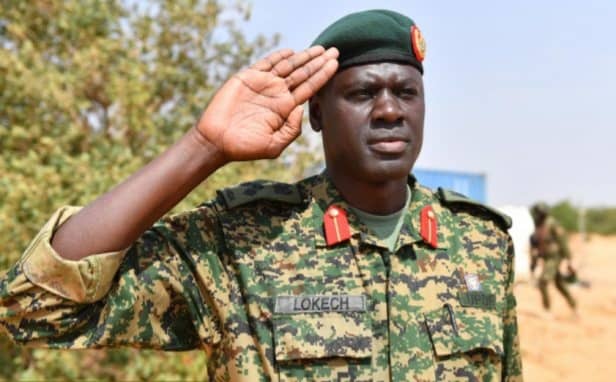 Before he died, afande Paul Lokech held a meeting. It took place at a hotel identified as Jokas located around Bweyogerere; Wakiso district. It was part of his efforts to find out the root cause of his biff with then MP Odonga Otto so as to make peace with him if possible.

The meeting was attended by three men including Lokech, Otto and another (now retired) military officer/former MP for Burahya county identified as Steven Basaliza a.k.a Omuduumizi. Afande Basaliza was reported to be a close pal to both Otto and the late Lokech and that Lokech; prompted him to initiate a meeting so as to iron out their alleged feud.
To Lokech according to what we gathered, his biff with Otto was an ‘imaginery’ one but went an extra mile to know it’s cause. Hence, the reason he sought the help of his friend to try and mediate the two and also try to find out why Otto was bitter with him.

“This is an imaginary conflict not a real one” sources quoted Lokech as saying in the meeting.
It was observed that the duo was biffing for show of supremacy and ideological differences.
On one hand was a senior in the military (Lokech) and another in parliament (read Otto).

“Basaliza was close to the two. The mediation process was initiated by Lokech and it ended well. I think the recent elections could have resurrected the old wound or scar. However, by all standards, Lokech was a professional, a polished officer and a gentleman. It’s unfortunate for hon. Otto to raise issues upon death. You can only forgive one who is alive but not dead” an inspector knowledgeable on the said mediation process revealed to this news site.
Otto over the weekend penned a missive which he circulated on social media detailing how his biff with Lokech escalated during polls and blamed him for his loss of his MP seat. Otto lost the seat to Lokech’s alleged adopted son but Otto emphatically puts it that this was Lokech’s biological son. The controversial former MP summed up his missive saying he had forgiven Lokech. This came after news of his demise came up.

Otto and Lokech’s alleged biff started way back when Lokech was still a Major in the army while Otto was a first timer in parliament. This was around 2004. At this time, LRA chief Joseph Kony and his men were very active and Lokech was among those at the center of fighting against the rebels. On the other hand, Otto was a politician and by far an opposition activist.
Therefore, these were ideologically reading on different political blackboards. And yet, according to our Inspectors, peace and assistance to the suffering people were badly needed.

As such, insiders revealed many people formed NGOs purporting to be helping the suffering people. Among those running some of these NGOs included an alleged close relative of Otto. As such government kept monitoring their operations. It happened that some of them whenever they received donations from abroad in form of wears etc to give to the people, some of the donations ended up in Kampala’s Owino market. It was only natural that such reports could reach commanders and some of them included Lokech who would intervene on behalf of his suffering people.

“Otto is just dishonest. The donations from Acholi in the diaspora through NGO ended up in Owino second hand section and shops. A very nasty situation back home but someone chose to benefit from it. The records are there and very clear on who ran those NGOs” inspectors revealed.

Meanwhile, Otto’s act of forgiveness towards Lokech has raised eyebrows among his tribesmen. Whereas others have welcomed it, it has come to our attention that Acholi senior elders are not taking it lightly opining that the former Aruu north MP is simply jubilating over Lokech death.

“This message by Otto before Lokech is even buried is a celebration of his death. The missive is a sharing of a genuine sentiment an instinctive defense of himself or appeal for sympathy as the by-election for Aruu looms” opined a senior elder.
Another one opined that ‘only the enemy smiles at these times. Extremely sad.’
“Otto is just being a dishonest man. A big beneficiary of the many years of the troubles in Acholi” another one shot.
As for parliament’s director corporate affairs Chris Obore, ‘quarreling with the dead is insanity. Anyone without a graveyard in their family should mock the dead. Think about your own dead ones’

“In my culture, we can only say Otto is dancing in the grave of Lokech in broad daylight” opined another elder.
More verbal artillery against Otto following his missive against Lokech suggested that he gets more jabs than kudos.
“Is that how it’s done? But enumerating all those accusations when Lokech is not there to respond? And so insensitive about the family and friends who were badly hurt? Is that forgiveness? What stopped him from shooting off his mouth while Gen. Lokech was alive?” Another elder ranted.

Many accused Otto of having gone against the African tradition which calls for respect of the dead.
We are told when Otto and Lokech finally met despite their ideological differences politically, their feud was settled and agreed to move together until it resurrected in the recent elections.

“I think their matter was LRA and remember at that time, LRA was at its maximum yet Otto and Lokech were of opposite ideology. But it was settled and they agreed to move together” the sources added. Indeed Otto in his missive, tries to say that at one point, Lokech tried to secure him a job from the president working with then deputy speaker Jacob Oulanyah the moment he lost elections.

“A bold brave fighter, Lokech helped pacify Acholi land. I have had a lot of interpersonal contacts with him and good memories. Firstly, I am grateful he helped save my life at one time. Him and Oulanyah muted a plan to talk to the president and get me some work saying I cannot be wasted in defeat. I remain grateful to this offer but I reluctantly didn’t take it” he said.
According to Otto’s narrative, it is clear that their relationship were ruined by recent elections. Otto even claims he was badly treated, arrested and prosecuted because he was pursuing Lokech’s son in court yet he was warned against this.
“You better leave Lokech’s son if you want to be free. You can contest another time. Leave the election petition” Otto said adding that

“Senior Acholi leaders including the CJ Dollo, DS Oulanyah, Rwot Achana and Gen. Otema and we’ll intentioned ACHOLIS pleaded with Lokech to let go of me but all in vain. God is not a sleeping God. I thought of publishing this so that I release Paul Lokech from my heart. Forgiveness is the part of the strong and I am better placed to do it now” Otto said after unleashing a hot story of his standoff with the late during last elections.
It should be recalled that during the LRA insurgency, government accused some of the area politicians of being sympathetic to the rebels. Most of the opposition MPs were alleged to be against government intervention to stop the war. Lokech died of blood clot and he is to be buried on Friday in Pader. Watch out for more details!