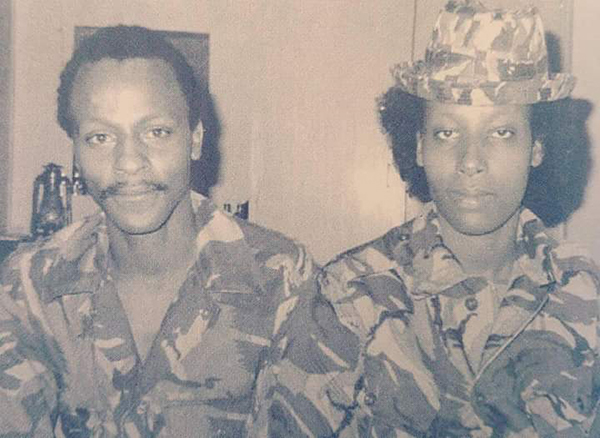 RIP_ Gen. Pecos Kutesa and his wife Dora during their bush war days

Dora Kutesa revealed the shocking news while eulogizing her deceased husband who was buried at Lyakajula Village in lyantonde district on Sunday.
Addressing mourners, Kutesa’s wife said that she had advised her husband against taking the covid-19 vaccine because he was on immunity-suppressing treatment following his liver transplant in 2009.

“We always got the drugs from India to suppress his immunity because we had been advised that a strong immunity would make his body reject the liver,” Dora narrated.
She noted however that at the height of the recent second wave of the covid-19 pandemic in Uganda, Gen. Kutesa opted to take the vaccine so as to protect himself against the deadly disease.

His wife however was against his decision, well aware of his underlying condition. He however told me to consult his surgeon in India, who opined that the jab would not be very dangerous since he had seen many cases with Kutesa’s condition take it without any serious complications.

Kutesa thus took the jab. Dora revealed that her fears were confirmed when after taking the jab, Kutesa instantly fell ill, with his health deteriorating while he was at the burial of Gen. Katumba Wamala’s daughter.
“While there he noticed that his eyes had turned yellow and when he told me I instantly knew that the jab had strengthened his immunity and as such the body was reacting by rejecting his liver,” she said.

The General was flown to Nairobi for treatment but doctors referred them to India where he died while awaiting a fresh liver donation with the old one donated by his wife having failed totally.
The late Kutesa began his military career in 1976 when he joined FRONASA, one of the military groups formed to fight the late President Idi Amin Dada.

He was trained at Munduli Military Academy in Tanzania and after the fall of Amin, he was sent to Nakasongola Military Training School. In 1981, Kutesa deserted the army and joined Museveni’s National Resistance Army (NRA) rebels fighting to remove Milton Obote. Kutesa is survived by a wife and six children. He is among the few officers who have written books to detail their war bush war experiences.