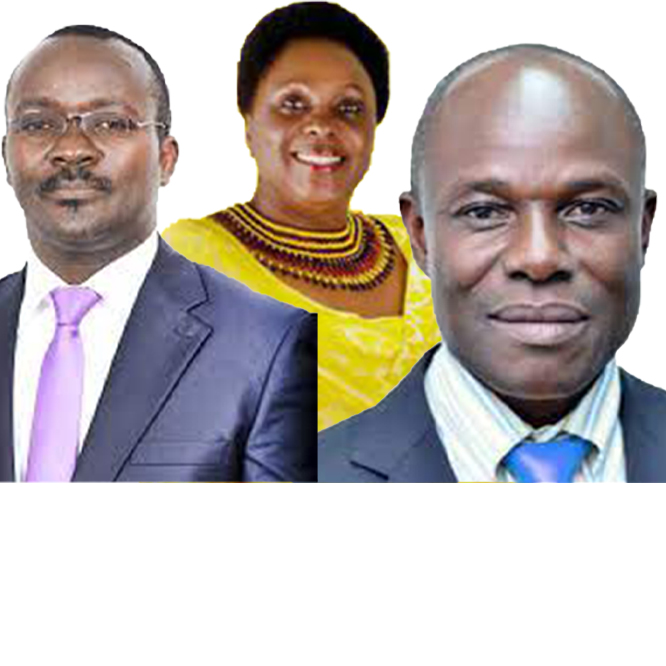 A photo mortage of Basajjabalaba, Karooro Okurut and silver mugisha

City tycoon Hajji. Hassan Basajjabalaba has began engaging all warring camps in Bushenyi district urging them to reconcile.
The district is reported to be heavily torn apart with many political camps seeking to outsmart one another hence pausing a threat to the ruling NRM’s survival in the district.

The infighting in the district is reported to have emanated from the messy NRM MP primaries of 2020.
Our top Inspectors reported that the primaries left many camps including that of Micheal Mawanda, Mary Karooro Okurut and that of Dr. Silver Mugisha.

However, with the desire to keep NRM folks in unity, Basajjabalaba has started convening meetings meant to reconcile the warring camps.
For example, we have it on good authority that Basajjabalaba has already convened a reconciliation meeting involving top district leaders said to be fanning the divisions in the district.

“We need to show political maturity. Why is it that Bushenyi is having these camps? Let us work towards achieving unity because this is what our National Chairman YK Museveni is always advocating for. We cannot be seen to be going against his aspirations which is detrimental to the success of our party and our own development as a district” Inspectors quoted Basajjabalaba as telling the meeting.

We were informed that Basajjabalaba who’s the NRM chairperson-Bushenyi noted that ever since the messy NRM primaries took place, the district was left with bruises and is currently in tatters.
“The NRM primaries were characterized by ugly incidents. This left the people very bitter. For instance, Hon. Micheal Mawanda (MP Igara East) accused Eng. Dr. Silver Mugisha of having bankrolled his rival Dan Karukiiko. When Dr. Mugisha’s wife Annet Mugisha came through as the Bushenyi district woman MP, the relationship between her and Mawanda has been frosty” explained an inspector.

As for Raphael Magyezi, he didn’t contest giving chance for Mbwatekamwa to sail through.
“However, many of Mbwa’s supporters think Magyezi is coming back and several of them are hurling insults at Magyezi on social media” says an inspector.

We are told the other case is that involving former woman MP Mary Karooro Okurut and Annet Mugisha, wife to National Water and Sewerage Corporation managing director Dr. Eng. Silver Mugisha.
“The supporters of both women are very bitter rivals. Bushenyi is no longer a model district in terms of togetherness. It is split” says an inspector.

Arising from that situation, Hajji Basajjabalaba in his capacity as NRM chairperson for this district and also a respected elder has decided to take it upon himself to bring the warring camps on the table to talk peace and reconcile.
Basajjabalaba according to details before us is an influential person in Bushenyi with several families having benefitted from his generosity in different ways.

“Basajjabalaba is highly respected in the district because of his services he has brought. He’s known for bringing a hospital, university, tea factories plus giving employment opportunities to many” our Inspectors said, adding that it is for this reason all Bigwigs have embraced his efforts to reconcile them.

We are told the tycoon began with the key camp leaders to first soften the ground before he can call other leaders.
“The next meetings will involve other MPs and opinion leaders. Those who attended thanked Basajjabalaba for this very important initiative” says an inspector, adding in that first meeting, leaders made accusations and counter accusations but Basajjabalaba urged for unity and cohesion.
Watch this space for who said what in the meeting!