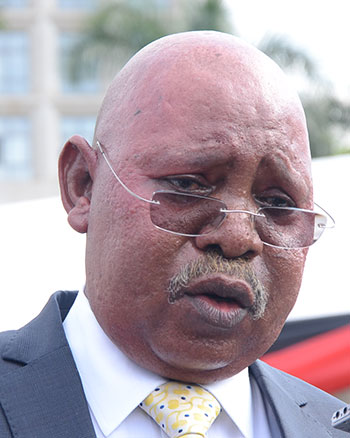 Images of tortured people, those killed and other detained spread allover social media and up to yesterday, this trend has continued.
An irritated Museveni responded by closing down social media platforms until recently when he reopened some but left Facebook unlocked unless one uses Virtual Private Networks or VPN.

On Thursday this week, when Museveni successfully attained a seat at the AU Peace and Security Council, many of his opponents flooded social media mainly Twitter to bash the AU member countries for electing Uganda whose human rights portfolio is allegedly dreadful. They posted all sorts of pictures of alleged torture victims the moment Museveni’s team in Addis Ababa posted the good news Uganda had secured. In that highly contested vote, Uganda got 34 votes to get to the PSC.

Museveni loyalists also took to social media to jubilate and showered his team in Addis Ababa for performing miracles.
The victory at AU however, didn’t come on a silver platter but it was long expected after Museveni aligned tactfully his men to ensure that his diplomatic ratings and those of government are restored to normal. In this expose, we brief you on the list of great men doing this miracle for Gen. Museveni. HERE WE GO!

He’s a specialist in IT and also a former member of Parliament from Mayuge district in Busoga.
It was reported that at the time he was deployed to ministry of foreign affairs as PS, Museveni was convinced that he really needed someone so sophiscated to help him fix the foreign affairs sector.
Apparently, some individuals had turned the sector into a money-minting venture to enrich themselves and paid less or no attention to the assignment given to them by the president.

In fact, Inspectors revealed there was a time Uganda suffered a diplomatic embarrassment as one of the top presidents in West Africa was allegedly made to sit for hours waiting for a top minister from Uganda who had represented the president.
The president had canceled the trip on last hour and deployed the minister only for him to spend time in South Africa.
“The president waited in vain. And this was a crucial meeting because Gen. YK Museveni is the deputy to this president in a highly sensitive initiative coined by the AU. The minister just spent time in Jburg and didn’t go as directed. It was a total embarrassment to make a whole president wait for hours and nothing came up” says an Inspector.
Other details suggested that Museveni was finding it difficult to attract investors here as some of his old team in foreign service had turned him into a source of income.

“Getting an investor to come to Uganda is a challenge we had because seeing Museveni had become so expensive. He had become really expensive and this scared investors. This is a situation Bagiire found and he has tried in his few months in foreign affairs to fix them” says an Inspector.

We have been informed that his men told him that Bagiire had proved a success story at the first deployment as PS at the ministry for information and national guidance hence the reason he had to remove him and deployed him to foreign affairs to fix the situation.

In fact, to show his confidence in him, this is why Museveni recently risked his life (in the face of Corona) and went in person to Speke Resort Munyonyo to attend the AU Council of Ministers meeting known as (Committee of Ten or C-10) meeting on reforming the UN Security Council.
Inspectors suggested that for Uganda to have hosted this meeting, it wasn’t an easy task as some groups wanted to frustrate it.

“The PS did a lot of work. He engaged the phone, he worked tirelessly until we finally hosted it. And now, here we are, we have also scooped the seat at AU Peace and Security Council for two years” an Inspector revealed to this news site.
We are told the president even heard of efforts by some kawukuumi to frustrate the meeting, and he asked Gen. Jeje Odongo, the foreign affairs minister to ensure this meeting was here.

“Who wants to stop my C-10 meeting? No way, it must come here and I am ready to attend it by all means. I am following it and need it seriously” he said to the minister but thanks to the robust team at foreign affairs, the meeting finally a fortnight ago was here.

He’s the MP for Orungo county in Amuria district. A former army commander, Jeje is doing wonders for Museveni and we swear, if an award is to be given out to all ministers, Jeje would walk home as the best man in delivering miracles.
We are informed that whereas he may not be traveling a lot due to his advanced age, Jeje is ever on top of the game by constantly coordinating the political arm at the ministry.

“Gone are days when a minister would be deployed, fully facilitated to attend a meeting but he doesn’t go. Jeje is ever on tabs with his political team and also fully engages the technical teams” says an Inspector. In fact, cases of ministers signing for facilitation but remain around weren’t in foreign affairs alone, but it was also reported in another sector of defense. A minister was one time given leave and all necessary facilitation to go to South Africa to attend to his sick wife only for him to remain around the dusty streets of Kampala.

“The PS (Noble Mayombo) had to order for the closure of the minister’s office and forced him to go. However, even as he went, he never reached S. Africa but stayed in Nairobi ‘treating’ another speaking project. This is the challenge we have among our political class. Some aren’t straight at all” an Inspector revealed.

To prove his workholic ability, Jeje and his team brought smiles on Museveni’s face yesterday evening after Uganda managed to win a position on the AU Peace and Security Council which he badly needed. Jeje’s team was led by Hon. Henry Okello Oryem and Uganda’s ambassador to Ethiopia also Permanent Representative to African Union HE Rebecca Amuge Otengo alongside Ministry of Foreign affairs staff led by the PS.

Many people have been wondering why Gen. YK Museveni appointed him a senior Presidential Advisor on Diaspora affairs. Walusimbi besides being an SPA is also the chairman NRM Diaspora League, a position he has occupied since 2005 when NRM metormophosed into a political party.

Inspectors suggested that when Uganda’s politics became tense with artists led by Robert Kyagulanyi alias Bobi Wine showing up to challenge him, the president knew it that this group had a following not only among music fanatics but also among top business men around the globe. These, it was feared would heavily finance the popstar.

A move was coined on how he (Museveni) would counter this situation by courting big name artists around the world especially the US where most opposition in Diaspora was or is. Intelligence informed him that Walusimbi was among those men in US who had links among artists there. Hence forth, Walusimbi was given the assignment to market Uganda among those artists and potential investors. In fact, Inspectors suggested that Museveni issued an indirect directive that Walusimbi be given access to his office at all times when he comes especially after he delivered a top musician called Akon.

Akon is a West African artist but based in the US. He is loaded and he spiced up Museveni’s appetite for investment when he promised to set up a big project called Akon city. In fact government has already allocated 600 acres to his project in Mukono district. His coming here was linked to Hajji. Walusimbi’s efforts and Museveni thinks Walusimbi can do more miracles for him to mobilize more Akons to come to Uganda.

“Walusimbi is no doubt doing public diplomacy. He has gone to a sector many people in diplomatic service have no clue about yet its important. The music industry is currently controlling the world and anyone who taps into it, is bound to achieve” an inspector explained.

We are told Walusimbi is also marketing Uganda’s tourism sector and soon, a big name Nigerian actress may come to Uganda and many more investors courtesy of him. He’s also urging several Ugandans to come and invest back in their country.

He’s Uganda’s special envoy to Kigali. Apparently, Kigali all along thought Kampala was sending ‘less profiled’ envoys in NRM to Kigali a sign of ‘undermining’ its influence in the region. Gen. Museveni tried his best by posting Oliver Wonekha to be it’s ambassador to Kigali. Wonekha had initially been to New York and that posting her to Kigali was viewed as a sure deal to both countries to develop confidence in one another.

However, this seems to have silently worsened matters and Kigali decided even to close down it’s borders with Kampala. It has only reopened the borders after Gen. Museveni posted one of the country’s top diplomats Amb. Adonia Ayebare to help fix things in Kigali. Indeed, a few weeks into his posting, fruits have started yielding for Museveni. Kigali has reopened the borders and also first son Muhoozi Kainerugaba has since visited Kigali to cement what Adonia started. Inspectors said that not that Kigali didn’t want other envoys, but just because it also knew that Uganda has some power brokers who are capable of taking a firm decision and so is HE Adonia Ayebare.

Ayebare and Rebecca Amuge Otengo have so far become Museveni’s top diplomats making miracles for him in fixing regional and continental affairs. Watch the space!