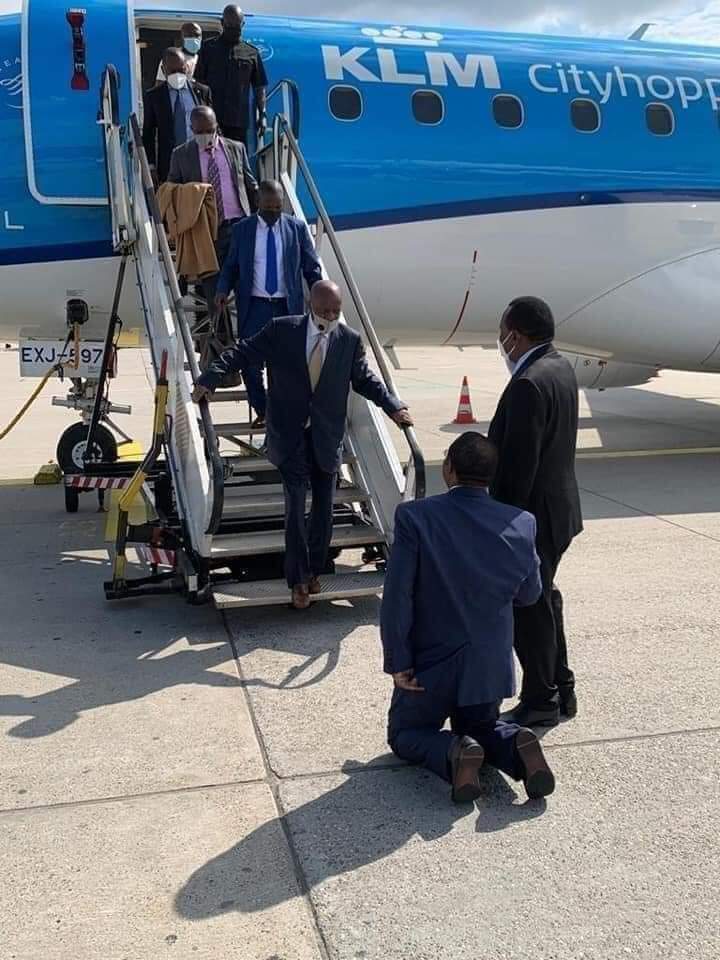 The Katikkiro has reminded CJ Owiny-Dollo that Kabaka flew KLM, not presidential jet to Gremany

Chief Justice Owiny Dollo Chigamoi will remind himself that lies are another form of injustice following a backlash he has received from Buganda kingdom loyalists and well-wishers.

Justice Dollo’s boomerang stems from tribalistic remarks he made in reference to the Kabaka of Buganda in an attempt to add his weight to a group of Acholi who accuse Baganda of having extended ill-will to fallen Speaker Jacob Oulanyah in his time of desperate need.

It is worth noting that while addressing mourners at the vigil of the fallen chief legislator earlier this week, the Chief Justice descended into an emotional tirade in which he blasted the Baganda ethic group for ostensibly celebrating the death of Acholi’s departed son Oulanyah. According to Owiny, the Baganda wished Oulanyah death because he was not “one of their own”

Dollo made the remarks in respect of last month’s protests which were staged by People Power/NUP protestors who wanted the ailing speaker to be returned to Uganda for treatment from Ugandan hospitals. In the demonstrations that happened in Seattle, USA, where Oulanyah was hospitalized, protestors called on the sick speaker to be treated here if he thought medical care was okay like he and other NRM leaders were telling Ugandans.

Dollo called such protestors wicked, although he went further to imply that these protestors were Baganda — despite the protests having been carried out in English.

But accusing these Baganda protestors of hypocrisy, Dollo reasoned that the same protestors would have staged similar protests when their ethnic leader (referring to the Kabaka), was flown to Germany in a presidential jet and using public funds.

“But your ethnic leader,(Kabaka) was transported in a Presidential jet to Germany using public funds, yet he was not entitled; you didn’t demonstrate. Is it because Oulanyah is an Acholi or that he doesn’t speak your language? A wicked person fights someone fighting for his life, a super wicked person fights a dead person,” he said

However, Dollo’s remarks have received widespread condemnation from Baganda and their sympathizers; with the kingdom leadership at Mengo also finally coming up to take issue with Dollo’s dragging of the Kabaka into the Oulanyah health squabbles.

In a statement issued Friday, Buganda Katikkiro Charles Peter Mayiga appealed to members of the public “to preserve the dignity of the deceased by avoiding ‘unfounded statements’”. According to Mayiga, such statements, although made amidst ‘high emotions’ “can only cause unwarranted debates thereby causing more grief to the deceased’s family, friends, colleagues and the entire country.”

Whereas he was short of mentioning Justice Dollo’s name, Mayiga appealed to those agitating for justice for the departed Speaker to live by his principles of honesty, love and reconciliation, and sticking by the truth other than ‘raising of voices without facts’.

“It will be recalled that in his maiden speech as speaker, in May 2021, the Rt. Hon. Jacob Oulanyah urged his fellow legislators to “put their faith in facts and sharpening arguments rather than raising our voices”,” Mayiga said.

The Katikkiro called for calm among Ugandans, also taking time to dispel the chief justice’s claim that the Kabaka was flown to Germany using a presidential jet.

“Death causes shock, grief and anguish and it often makes emotions run high. That is why it is required of all of us to be calm during difficult times like this. Just for the record, however, when the Kabaka flew to Germany in August, 2021, he did not fly by the Presidential jet, but by KLM Airlines,” Mayiga said.

DON’T MOURN MORE THAN THE BEREAVED

The Katikkiro’s stance only adds to the voices of other prominent Baganda who have come up to criticize the chief justice for fanning tribal sentiments against Buganda and her people. In an earlier critical post, Buganda Caucus MP dr. lulume Bayiga told off justice dollo to stop mourning more than the bereaved (oulanyah’s dad)

He said; “Owiny Dollo you must withdraw your sectarian statement about “an ethnic leader” who was flown to Germany in a Presidential Jet yet without “entitlement” I guess you meant to castigate Baganda. And you went ahead to attack their ethnic leader. Who told you that those who protested in the US were Baganda? Now you Dollo speak good English, does it make you an English man? Totukooya naawe!! We are all sad that we lost an outstanding leader, who is a Ugandan but happens to come from Acholi land. You must be sad too but maybe not more sad than Mzee Lokori.” he said. “But at your level as chief Justice Mr Owiny Dollo, you were exposed by your inherent prejudice against the Kabaka of Buganda, who never asked for any favour from your likes to go to Germany. Whereas we all err, and to err is human, I would like to ask you to openly declare that you were exposed and display a sense of shame, apologize and withdraw your too native a statement, if you would deserve our respect again.

YOUR WORDS BETRAY YOUR STATUS

Dollo was also criticized by lord mayor Erias Lukwago, who said the Chief Justice’s reckless words could spark off a wave of ethnic cleansing against Baganda. “With all due respect to the Chief Justice, that unfortunate statement and tribal diatribe was totally uncalled for and can potentially spark off unnecessary ethnic cleansing. It’s the least expected of a person of your caliber,” Lukwago said.

NOT ALL NUP SUPPORTERS/PROTESTORS ARE BAGANDA

In more comments which reveal that Justice Dollo was caught in the fix of the much touted fallacy that the NUP political outfit represents Buganda/KY, many social media netizens accused the chief justice of turning a sociopolitical matter aimed at making national leaders accountable into a tribal issue. Many of such commenters believe Dollo, just like a few Acholi of his ilk, simply have a natural hatred for Baganda. Notable among these is Medard Ssegona, the chairepson of the public accounts committee in Parliament. Like Lukwago, Sseggona said what Dollo did is ethnic profiling of Baganda.

“A very sad day indeed when a key national leader, no less than the Chief Justice of Uganda makes unfortunate sectarian remarks. Not only are the remarks sectarian but they’re also untrue. I don’t know why he thinks that the activists who demonstrated against the treatment of Rt. Hon. Jacob L. Oulanyah are Baganda. If l recall correctly they wore red berets which are a brand symbol of a political party and not the Kingdom of Buganda. The Kabaka of Buganda flies abroad on commercial airliners and never at taxpayers’ funds. Let all of us who knew the late Rt. Hon. Speaker mourn him without fanning tribal hatred that could lead to violence and bloodshed. Rest in peace with the angels my former guild speaker who rose to a Speaker of the nation,” said a one Christine Mugerwa.

Lubwama Henry observed; “Generational hatred is breaking our societies and it’s fueled by people with egoistic tendencies…it’s painful for our so-called leaders to propel unjustified hatred.”

Jeremiah wailer said; “The issue is reducing all of us Baganda to a couple of NUP supporters every time. They are taking a political issue and making it tribal on our cost. Mao and Owiny need to check themselves. The notion that other tribes have suffered the most to bring up the country is naïve. Must we remind them what the northern national leadership did to Baganda? We grew up being told that those people from the north have natural hatred for Baganda. What Mao and Owiny have done is to express to us the younger generation that people from the north hate us and our tradition.

Meanwhile, while commenting on his twitter handle, Daudi Ogutu said; “How did the Chief Justice know the demonstrators were Baganda. He erred on making this about tribes. Death is sad. But the reality is many Acholi mothers and fathers don’t have access to Seattle hospitals and chartered planes. And it’s folly to ignore the plight of the people.”

Still on twitter, Isaac Atwijuka said; “I won’t divulge into the Chief Justice‘s speech because I don’t like discussing petty things. My concern is why can’t we have purchase a private jet for our king? Yes it’s expensive but Ugandans of good heart can contribute to this cause.”

The matter that led the chief justice to attack the Kabaka stems from a demonstration in which protesters paraded at the Seattle Cancer Care Alliance on February 7,2022 while chanting, “Jacob Oulanyah, not in Seattle’s backyard,”. This was in criticism of revelations that the government had spent Shs1.7 billion taxpayers’ money to charter a plane to airlift him to America.

The protests followed a mobilization of Ugandans— majorly NUP supporters by reportedly a one Alimadi, a son to deceased Acholi son, Otema Alimadi. The protests were however taken in bad taste by a section of Acholi, who looked at them as an attempt by Baganda to deny their own treatment abroad. The war was then ignited by Oulanyah’s friends including Ojara Mapenduzi, Anthony Akol and Norbert Mao, who has since sustained a twitter war against NUP and its President Bobi Wine — but majorly using the protests as a spark. Mao’s outbursts followed a vow by his group to rally other Acholi to fight for their brother Oulanyah on account of the principle that Blood is thicker than water!