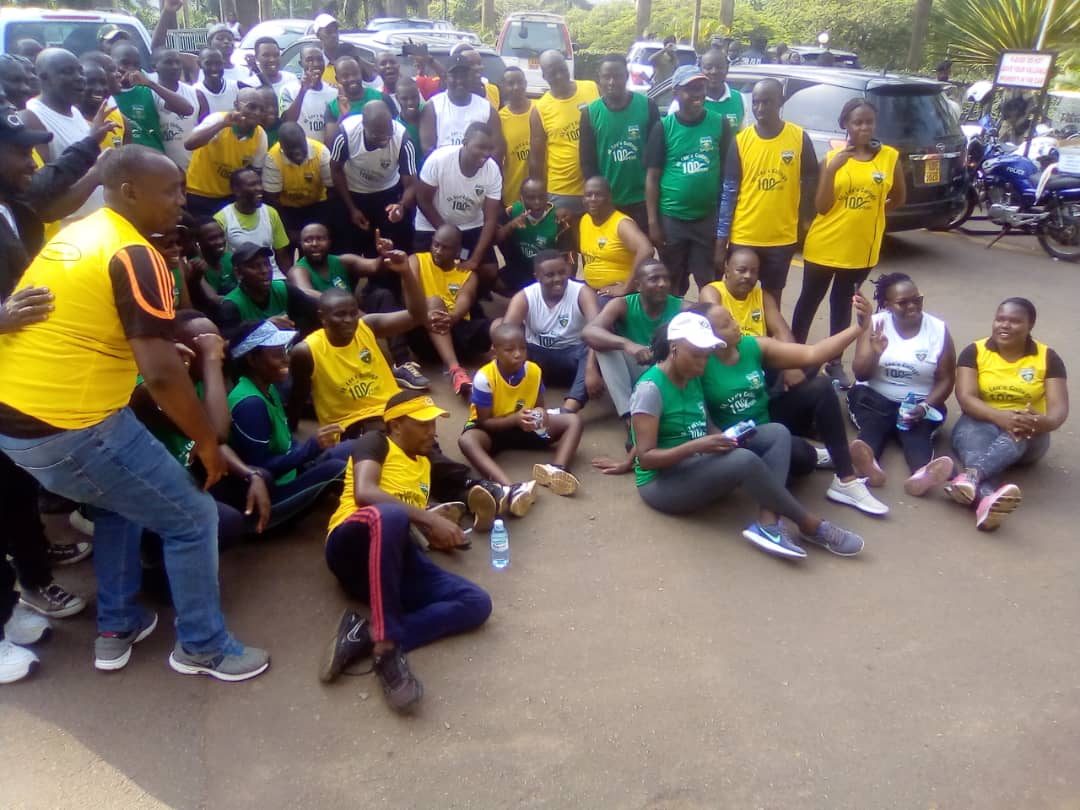 It was pomp this morning as a group of Old Students of Tooro-based St. Leo’s College-Kyegobe marked 100 years of the school’s birth.
The Old Students converged at Sheraton hotel to participate in a 5-kilometer marathon. The marathon began at Sheraton, through Nile avenue, Electoral Commission yard up to Fairway junction before returning to Sheraton.

Among the participants was 96-year-old OB mzee Emmanuel Basaliza. A retired veterinary officer, Basaliza is also believed to be the seniorest golfer in Africa and possibly in the world.
Speaking to our Inspectors, mzee Basaliza who looked energetic even as he moves towards clocking a century on earth, said he was happy interacting with his former schoolmates.

“I am excited to be here with my OBs. I am very much excited and honored for these young men to be here with me as OBs. Some I didn’t know them, I just met them here because we belong to the same school” he says, adding that ‘Any student who passed through St. Leo’s College-Kyegobe, should participate in our activities because without it, one wouldn’t be where he is now today. It is our source of knowledge and life’

Indeed, of all runners, it was only mzee Basaliza whose generation couldn’t be traced among other participants except himself. Majority of the runners were youths and others next to him were in the age bracket of 60s. These included his own two sons Col. Steven Basaliza Mwesige and his brother Charles Basaliza a former employee at the defunct Uganda Electricity Board. He worked under Eng. Irene Muloni during her days as Managing director of UEB and only retired in 2004. He’s now a self employed man aged 59years.

“I feel very happy but I am also wondering why OBs of my generation aren’t here with us. Men of our age are not here. Some are ministers, high ranking military officers, Managing directors etc. I am seeing majority are our kids and they have challenged us old men. Can you imagine an OB aged 96years is here but for us we’re few here?” He wondered. He said some of the çhallenges at this great school is administration. He said whereas those days the board chairman of the school was a Catholic Bishop, these days this has changed and somehow, it affects on the discipline of children. He urged for a return to the former arrangements as it is still the case with sorrounding schools like Nyakasura.

“We need to fully participate as senior OBs of the school to develop it further. Let’s have that spirit because this school really made us” Charles Basaliza said.