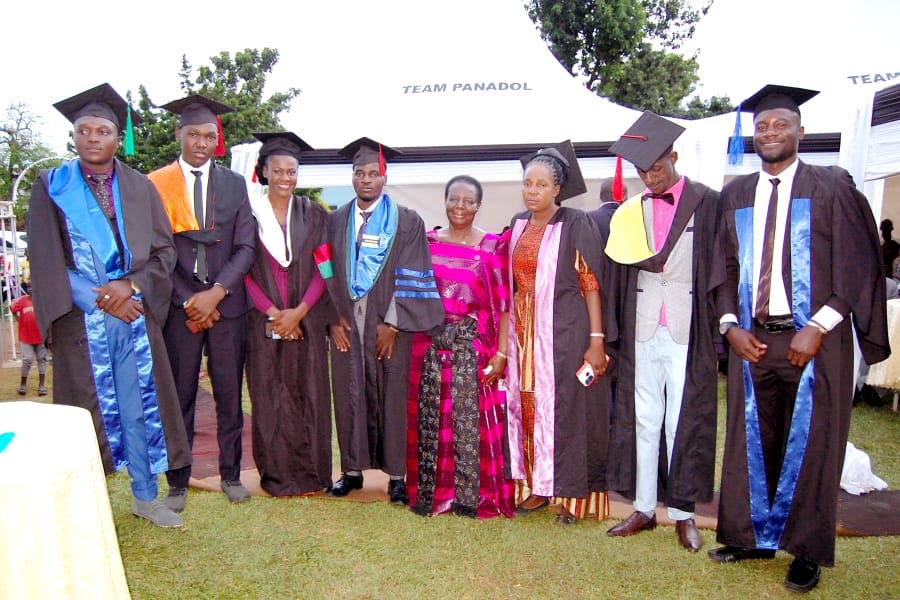 “Graduation is one of those steps in life that defines the coming of age. It’s the ending of one era of life as a student.
Now prepare to move to another stage as a leader, a doer, and an achiever in a wider world” says the Senior Presidential Advisor for Busoga in charge of poverty alleviation, Hon. Florence Mutyabule.
She says as graduands, they leave school with many plans and dream to reach where they want to go next, but this will only depend on their determination.
“I know you have plans and good ideas of what is coming next. You have a pretty idea of what you want to do next, a dream and a lot of hope to reach there.

The coming times will be exciting. Will be trying but will depend on you and your determination” she counseled.
Mutyabule who’s an educationist made the motherly remarks as she addressed people who turned up to celebrate with the family of Mr. &Mrs Wilson Kutusa Bakuseka as their son Bernard Kutusa celebrated his victory in reading books.
Giving her personal experience, the soft spoken Mutyabule was invited as the guest speaker at this graduation party. She said upon her graduation 1979, she held her fete but without a public address and instead, there were drums (tameihna ibuga and Nalufuka). She said that not withstanding, her big drums were her dreams of becoming a graduate teacher.
“I hoped to get married, get children, drive a car, be a millionaire in 10 years, travel the world, get to parliament, have long hair, live in a big house with a swimming pool” she said, adding that she had planned to take it easy and not to work hard.
“But after many years my life didn’t wholly turn out as I wanted. For example I married, got 4kids but haven’t become a millionaire since after those 10 years. I haven’t travelled the whole world, no long hair, have no big house with a swimming pool. Therefore, life doesn’t follow the plan you lay out” she counseled.
Mutyabule who even showcased her dancing prowess in Kisoga dance, informed those who finish school that life is full of highs and lows. She however, said only those who remain focused and determined, will succeed in their dreams.
“You will experience highs and lows of life, the difficult and easy. Unfortunately, there may be times of too many difficulties and not just smooth sailing.

Your true success will be defined by how you handle both difficult and easy times” she said.
She went on ‘You may not get the millions on your first job, 2nd, 3rd. You may never become CEO of a big company but that’s ok.
The most important thing you have already taken the initial steps needed to build more a promising future. Every class, lab experiment, easy writing have all been preparing you to adopt to change and challenges’
Mutyabule said as graduands, they have taken key steps towards a successful future and also betterment of their family and community.

“You’ve worked hard, spent months learning new skills set. The complex world today requires education and skills that were not needed in the past” she noted.
Borrowing words of Raphael Waldo Emerson, Mutyabule crowned her words of wisdom to the graduand of the day Bernard Kutuka and all those who finish school saying;
” Don’t follow where the path may lead. Go, instead, where there is no path and leave a trail” she said.
Meanwhile, the graduand Bernad Kutusa appreciated the parents for supporting him in education up to that level. He encouraged other students to respect parents efforts by concentrating on education.
His parents who were all smiles elaborated on the pains a parent goes through to educate a child.
Wilson Kutusa the father encouraged parents to encourage their children study subjects that can create self employment.
Buyende RDC Denis Balwanirewa was also present and encouraged parents to always check news papers for government jobs advertised. He said parents should encourage their kids to apply for those jobs instead of asking for those jobs during graduation ceremonies.