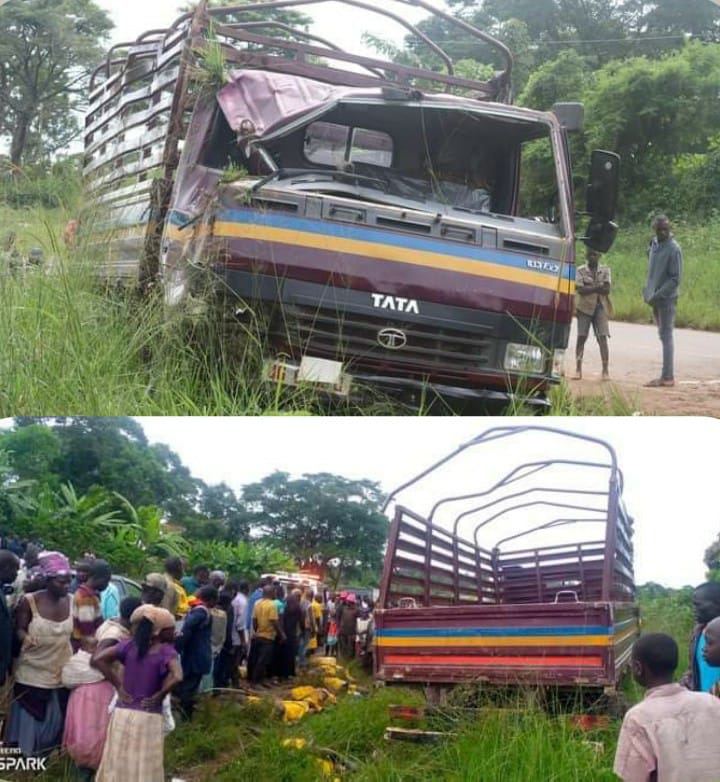 A serious breach of the traffic laws of Uganda by the Uganda prisons services is partly responsible for the death of five inmates, The Inspector can reliably report.

Earlier Monday, the Traffic Police Directorate Spokesperson Faridah Nampiima confirmed that five inmates from the Butuntumula Central Prisons facility died on the spot after a lorry in which they were travelling got involved in a head-on collision with a salon car, UBG 587W. The fatal accident happened at Nalongo village in Luweero district at around 9am. Details show that at the time of the crash, the lorry, UG 0363, was carrying 54 inmates and 12 warders who were en route to a community service assigned to the prisoners.

The accident wull however leave a bitter feeling in the hearts of the deceased inmates as it comes on the backdrop of a serious breach of the Traffic and Road Safety Act, 1998. It is worth noting that as per the law, a lorry is classified as a goods vehicle which is therefore unfit/prohibited from carrying passengers. And specifically, Section 100(1) states that “No person shall use a goods vehicle on a road for the carriage of passengers for hire or reward or of non-fare paying passengers or of goods except in accordance with the terms of a basic licence.”

Basing on the above law, therefore, it means the Prisons authorities must prove that the lorry in which the inmates perished was licenced to carry persons/passengers since at the time of the crash there were 66 persons who were neither the drivers nor turn men of the ill-fated lorry.

Should the prisons authorities fail to prove the above, then the public also waits to see whether the concerned persons will be punished in accordance with section 105(1) of the Traffic and road safety act which states that “Any person who—(a)uses a motor vehicle for the carriage of passengers or goods for hire or reward when not licensed to do so; or(b)being a holder of a vehicles operator’s licence, carries passengers or goods in breach of his or her licence or any of the terms or conditions of his or her licence, commits an offence and is liable on conviction to a fine not exceeding one hundred currency points or imprisonment not exceeding year or both.”

The accident also brings to light the persistent impunity exercised by government entities and personnel on public roads. Severally, the general public has complained about the total disregard of traffic laws by this group, which has partly led to an increase of accidents on roads as well as loss of lives. In fact, if it wasn’t for the impunity of the Uganda prisons services, then the inmates would have been transported in a proper passenger vehicle, which would have reduced the fatalities since most goods vehicles are closed and have provisions of seatbelts which reduce chances of death during motor crashes.

The accident also happened just shortly after police had arrested a state house driver for making a wrong turn at Aga Khan Primary school. Reports indicate that the driver of government vehicle UG 4176C was apprehended after he intimidated traffic police officers who tried to stop him.