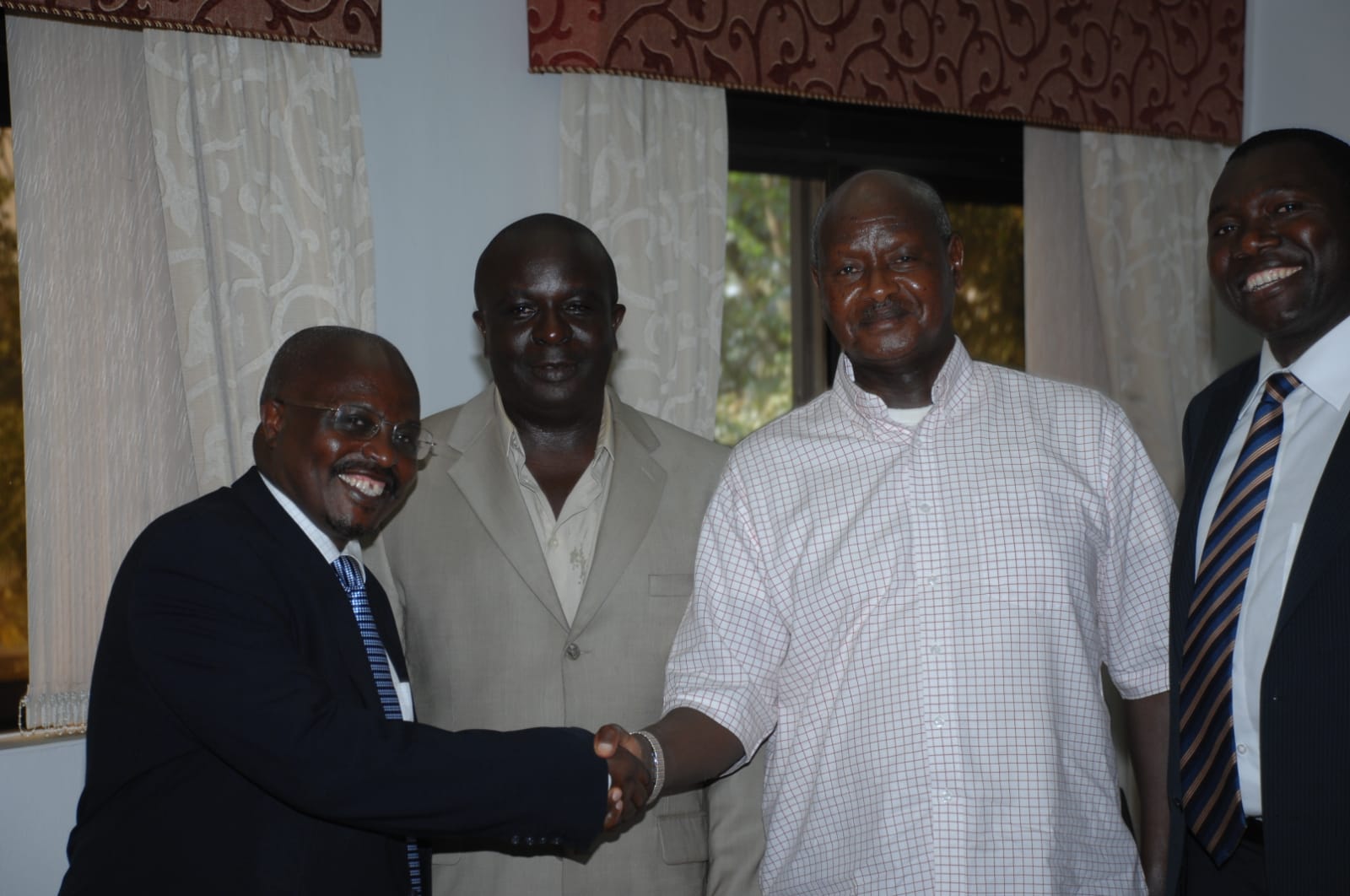 “The Gang of Four had posed a big threat to President Yoweri Museveni. He badly wanted UNLF-AD dissolved. Amama sealed this deal for him in Denmark” an Inspector revealed!
Museveni according to Inspectors, allegedly feared this gang could disorganize his hitherto young regime until he dispatched Amama Mbabazi to help strike a deal, which the man from Kanungu ably executed and is the reason he’s still in power. In this expose, Our Inspectors took us through details of this mission and why Magode Ikuya probably the oldest man in cabinet in the whole world is now a minister while Mbabazi has bounced back despite his political rebellion in 2016.

During the cold war, elites had to either identify with the East (socialists) or West (capitalists). The East stood for the oppressed people by the international finance bodies-IMF and World Bank. At that time, one of the Uganda elites Dan Wadada Nabudere was in the United Kingdom studying law and while here, he founded the Uganda Students Association where he became it’s president. He completed his law degree and became a barrister in the Honorable Society of Lincoln Inn-London. Inspectors suggested that during this time, Nabudere (RIP) was radicalized by communism. His radicalism even pushed him to pen a letter to Milton Obote asking him to democratize UPC. At this time, the US-Vietnam war was in full gear.
Nabudere persuaded fellow Africans to express solidarity with the oppressed people of Vietnam and henceforth, founded the Uganda Vietnam Solidarity Committee (UVSC) to do propaganda.
Inspectors said when he was called to the Bar, he handed over the leadership of Uganda Students Association to Wanume Kibedi (RIP) but he maintained his grip on the UVSC. When Nabudere raised issues of democratizing UPC, he; together with ‘rastaman’ Chango Macho (RIP), Wadada Musani; a brother to Museveni’s state minister for elderly Gidudu, were knifed from UPC.
It’s at this point that he joined legal private practice and formed a law firm called DW Nabudere &Co. Advocates. He however, continued frequenting schools giving lectures to High School students. Here, we are told he was able to meet young revolutionaries like Yoweri Museveni.
Inspectors suggested that as chairman of UVSC, he made contacts with Vietnam and the socialist world and brought here literature. He opened thus a book shop called Lumumba Progressive Bookshop in Mbale town along Naboa street. It is here that he also got in touch with Magode Ikuya and Maumbe Mukwanha who would act as the shop attendants.
“This bookshop became a hotbed for breeding socialist revolutionaries. Whenever Museveni got holidays, he would go there for further indoctrination and radicalization. That’s how Museveni read more about the oppressed world of socialists at the hands of the Americans” an Inspector explained adding that whenever he visited, Museveni used to sleep at Nabudere house and used to spend a good chunk of his life with Ikuya and Maumbe Mukwanha advancing ideological arguments of socialism.
At the same time, such visits helped Museveni have quality time with Nabudere Revolutionary Cells in Mbale.
These cells were led by Nabudere’s socialist commanders like Natooro Masaba. Natooro would later be killed in the morning during Amin regime and Museveni survived by a whisker. This was at House No. 49-Maluku estate. This house has since become an NRA historical site or shrine and that it is here that this year’s Tarehe Sita celebrations were held. In fact, we are told Museveni decided to take this year’s Tarehe Sita festivities in Bugisu just in memory of this Maluku incident and also to try to trace his roots in the struggle.
This Maluku house had become a recruitment center for Ugandans who wanted to join the liberation from Tanzania.
“So, there was no accident that Museveni was almost killed here. That was their tactical or military operations house. In fact, many Bamasaba boys were recruited and ferried to Tanzania for onward transition to Mozambique to fight alongside FRELIMO under the umbrella of FRONASA led by Museveni” says an Inspector.

OBOTE IS SHOT AT LUGOGO

Inspectors reported that when Obote was shot at LUGOGO by Muhamad Ssebadduka, he allegedly went on rampage arresting whoever he suspected in the plot and Nabudere was the first to be jailed. He found in jail the likes of Grace Ibingira and Mathias Ngobi.
Museveni who at that time was reported to be working in the president’s office would however, stealthily sneak into his pal, Nabudere’s home to check on the family.
“Such visits would also help him check on the cells which were now being coordinated by Magode Ikuya and Maumbe Mukwanha” the Inspector revealed.
When Amin overthrew Obote, all those Obote arrested were released including Nabudere.
Inspectors said, in trying to gain legitimacy, Amin filled his initial cabinet with elites, the reason he appointed Wanume Kibedi as his foreign affairs minister. Wanume, we gathered was a brother to Sarah Amin and therefore was a brother in law to Amin.
“Therefore, Wanume became the recruiting officer of the elites for Amin. In the process, Wanume played a role in Nabudere’s appointment to the East African Railways because they were buddies back in the UK” an Inspector explained.
Even here, Nabudere’s revolutionary acts failed to rhyme with Amin’s human rights abuse and he resigned and escaped to Tanzania to join anti-Amin exiles.
Reaching here, Nabudere became a lecturer at Dar El Salaam university but tried many meetings linking up with other nationalists like Edward Rugumayo who at the time was in Lusaka and they formed a movement called Committee on Democratic Liberation of Uganda.
“It was a non-violent committee whose members included Omony Ojok, Yash Tandon, Edward Rugumayo and Nabudere. These would later become the popular Gang of the Four. Their politics was non-violent and thats where they differed with Museveni who kept telling them that the Lutwas didn’t understand politics of dialogue but fire” an inspector said.
While in Dar, Nabudere tried to initiate talks with Obote because he wanted reforms in UPC but the man from Akokoro feared this and employed the services of his political barking dog Masete Kuya to tear up Nabudere. So, he decided to proceed with other willing partners in the struggle mainly Museveni.
“While Nabudere concentrated on building the political wing, Museveni was busy on the military wing but the duo worked mutually together” the Inspectors explained.

When Amin was successfully ousted by Tanzania-backed UNLF, Nabudere became the chairman Political and Diplomatic Commission while his other gang members Rugumayo became chairman National Consultative Council with Omony Ojok being the secretary. Tandon and Maumbe Mukwanha became members of NCC and that, all these were members of Nabudere political grouping. When UNLF formed the Military Commission with Paulo Muwanga as it’s chairman, Nabudere’s gang allegedly supported Museveni to be his vice purposely to counter balance Muwanga who was Obote’s man backed by Kikosi Maluum or special force.
“The irony was that while the Gang of Four didn’t believe in violence, they secretly worked with Museveni’s group. Throughout this time Nabudere was in Tanzania, Magode Ikuya remained in Uganda doing political work and used to visit these people from time to time” an inspector said.
It was reported that Nabudere was so powerful in his commission that when Obote announced he was returning to Uganda, he issued a statement saying that was only possible if he returned as an ordinary Ugandan and he was not supposed to address any rally under UPC party.
This statement caused Nabudere and his group trouble. When they went for a trip in Arusha, Muwanga connived with Obote and the Gang of Four remained in exile. During his reign in that commission, Nabudere introduced the Mayumba Kkumi policy and had entrenched himself among wanainchi.
“Obote feared him. He overthrew Binaisa to dismantle Nabudere’s Mayumba Kkumi. With that, he became a target and had to take off” an inspector said.
While in exile, the Gang of Four (professors) formed what they called UNLF-AD (Uganda National Liberation Front-Anti Dictatorship).

When Museveni captured power in 1986, he tried to make his first government full of elites just like Amin did. However, the Nabudere Gang of Four remained out of this arrangement and carried on with their UNLF-AD with Rugumayo being it’s chairman.
Sometime in 1994, Inspectors said, contacts with Nabudere started. Balaki Kirya one of the former ministers knew Nabudere’s elder brother identified as mzee Erieza Mashate who also happens to be the father to NRM Diaspora League secretary general also barrister in London, Peter Magomu Mashate. Mzee Erieza was allegedly requested to go to Denmark to meet Nabudere and persuade him to return to Uganda and more so work with Museveni and NRM.
To ensure Erieza reached, Museveni deployed a one Kasigazi to travel with him to meet Nabudere.
“Erieza talked to Nabudere and delivered Museveni’s message extending a hand and invitation to return. However, Nabudere asked for time to allow him consult UNLF-AD” an inspector said.

After sometime, Museveni got Intel that Nabudere and gang had accepted to comeback. He dispatched Amama Mbabazi to travel with Erieza to Denmark to meet Nabudere and his UNLF-AD. It was here that an agreement was signed. Inspectors said Amama’s deployment was meant to ensure that Nabudere and his group agree to first denounce and also dissolve the UNLF-AD. The Gang of Four accepted this demand and this is how they returned, giving Museveni a sigh of relief politically.
In fact, so excited he was that Museveni reportedly met Nabudere at Rwakitura where he proposed a position of vice president to him. Nabudere went to this meeting in company of then Mbale bishop Mudonyi.
“Nabudere however, declined the appointment saying he needed to know the terms which were never given to him at the time. He opted for elective politics as a CA delegate representing Budadiri west which he won resoundingly” an inspector said.
His stay in CA showed Nabudere as the defacto opposition chief although he maintained contacts with his former pal Museveni. This is why when he died, Museveni went for his burial and also set up Wadada Nabudere memorial institute. When Erieza also died in 2010, Museveni who was away delegated David Wakikona to represent him after Nabudere called him to inform him of this tragedy.
As for Magode Ikuya, it is reported that when Museveni seized power in 1986, the person who welcomed NRM in Mbale and Tororo was Ikuya who welcomed Brig. Matayo Kyaligonza to Mbale. This is why he was immediately appointed the first Special District Administrator of Mbale. Ikuya would later head the defunct Movement secretariat. All along, Inspectors said Ikuya had been a disgruntled NRM supporter writing stinging articles in news papers until recently when Museveni finally appointed him a state minister for EAC at his advanced age! The president also had earlier on appointed Nabudere’s gang members Omony Ojok (RIP) and Edward Rugumayo to cabinet.
As for Nabudere lineage, they have remained staunch Museveni’s supporters although no political appointment has ever come their way to date.
Watch out for part II.