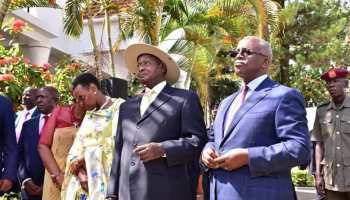 Amama Mbabazi’s family was bound to make a thunderous applause back home about two months ago, had their expectations for a big post in cabinet come true.

This however, didn’t happen after the former prime minister was not included on the cabinet list as had earlier been expected.Mbabazi all along had become a regular visitor to state house and all predictions in media and political class suggested that he was returning to government in a big position as vice president or prime minister. In a dramatic turn of events however, the president appointed ladies in those two top positions including Jessica Alupo and Robinnah Nabbanja respectively.

This online news site has established the reason why the president got a change of heart and left out his man. DETAILS During the 2016 fall out between Museveni and Mbabazi, the two principals nearly went for each other’s throat over a threat by Mbabazi to leak Museveni’s state secrets.Museveni stood firmly at Moluringa state lodge in Moroto and assured Mbabazi not to be tempted to divulge state secrets even when he had left government.

He said state secrets are confidential. “Although Mbabazi has become a politician, he shouldn’t put the country’s security at risk by revealing government confidential secrets. It is unethical for anyone to expose for example people who have been spying for the government. This puts the lives of the spies and their families at risk” he said.

A tough talking Museveni (then) even went as far as reminding Mbabazi and his men that whereas he was talking about government, for him he was talking about the struggle for Uganda where he had spent 50years and only 30years in government.” And there is nothing I fear that anyone can bring out. I know the people I fought, I killed and those who killed my… To think that I fear if Mbabazi says this or that, there’s nothing he can say. When we were fighting, we know what we did and when we are in government, we know what is confidential. It is criminal for you to bring out government secrets” he said adding that as a person, Museveni feared nothing.

Now, we understood that as Museveni fought much to put off this threat by Mbabazi, his agents landed on a dangerous ‘chemical’ that touched on Museveni’s expenditure and portrayed him as an extravagant man. The document which contains secret figures shows Museveni as a financially ‘insensitive’ leader  due to his expenditure and is rumored to have been engineered by Mbabazi’s camp when he sought to dislodge Museveni from power.It is entitled ‘A COSTLY PRESIDENT’.’ If parliament approves the budgetary estimates, the offices under the president will have close to one trillion to spend. This is about 6.6percent of the 15.5trillion national budget for FY2014/5″ the dossier seen by this site reveals in part.

At the time the dossier was authored, the agriculture sector was allocated 473billion, a figure far below that of president’s office which doubled it with a mega budget of 960billion.The office of the president has six departments including office of the president, state house, Uganda Aids Commission, ISO, ESO and directorate of ethics and integrity. According to the 4-page dossier, the president was to spend shs92.6bn to attend only 70 planned community functions, he was also supposed to spend shs27.6bn to host delegates from districts, shs5.9bn for attending six international trade meetings, shs10bn for foreign travels to 20 countries and shs13.05bn to procure a specialized presidential vehicle at shs6bn and Shs5.2bn on buying 32 support cars.

On top of this, the dossier added that Museveni was to have shs53m for burials per month which his vice president Edward Ssekandi (then) was to spend shs17.3m on burials. There was also a proposal to procure a new president copter and that shs5.3bn had been allocated to this as a deposit.The document goes ahead to reveal more details showing how the president was consuming a lot of money. Our sources said Museveni all along had never had any of his competitors digging deep into his office but this time round, when he faced Mbabazi, many of such ‘classified data’ came up until he had to raise his voice high enough for the former premier to back off.

Whether it was true or not that the alleged information came from Mbabazi’s camp, he couldn’t escape such suspicion since he had been prime minister and also a right hand man of the president to be privy to several confidential information.”This is why it was not surprising that he never returned soonest as many had expected.

The president is still doing background checks. There were lots of information he got and he wants to know who was behind it. Remember, (at the time) there were several players fighting to outsmart each other” sources said but added that there are high chances that Mbabazi will be posted soon.We are told this document was allegedly leaked to Museveni by moles in Mbabazi’s campaign camp and that he took time to ask him about it in one of their recent meetings.

It should be recalled that Mbabazi lawyer had his office broken into by unknown people whom made away with high profile documents. None the less, the two principals have since rekindled their relationship and it was widely expected that Mbabazi was to return as VP of PM something that never was. Within NRM, many folks still fear to broadly associate with Mbabazi also reffered to as Mr. Kololo because they are unaware of the level of interaction he has with Museveni following their bitter fall out in 2014. Mbabazi stood against Museveni although he was badly defeated.

Since then, he has kept a low profile until recently when he started attending Museveni’s functions. We are actually told he is doing behind the scenes fixation of the troubled economy and he’s the man behind the planned merger of many government agencies. Watch the space!