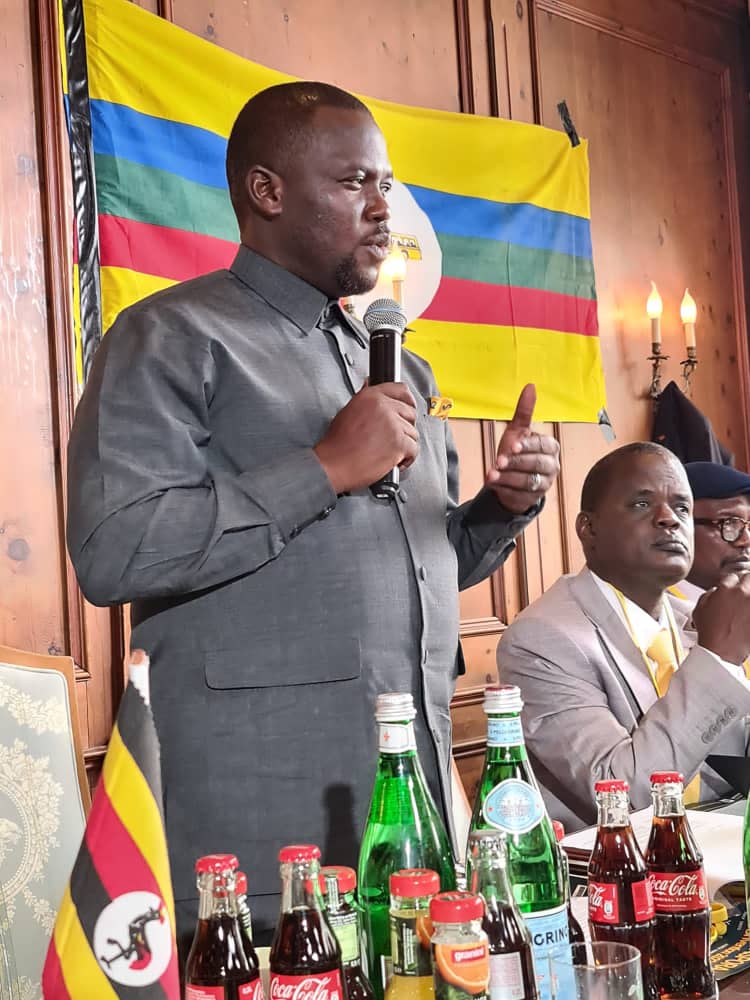 SG Todwong addresses the convention in Germany as Pollar looks on

NRM Secretary General Richard Todwong has warned that if corruption is allowed to spread, it could lead to the downfall of any government.
He says there’s need for NRM and it’s people to keep up the vigilance against corruption.
“Facts prove that if corruption is allowed to spread, it could eventually lead to destruction of a party and downfall of a government. We must keep up our vigilance” he warned.
Quoting famous Chinese leader Mao Tse Tung who once said that ‘worms can only grow in something rotten’, Todwong noted that in some countries where corruption has been high, it has led to resentment among people, unrest in society and eventual fall of governments.
He advised that building what he called a fine party culture and a corrupt-free-party is a major political issue of great concern to the people.

Todwong made the remarks while opening the 1st NRM European Diaspora Convention in Munich Germany. The 3-days conference started on Friday to Sunday yesterday and was attended by NRM Diaspora leaders, ambassadors among other government officials and well wishers.
Todwong encouraged NRM Cadres in Diaspora to caltivate a culture of selflessness and sacrifice if the party is to survive.
He said the party needs cadres who are truly transformed in the real principle of the revolution.
“We need cadres who are selfless, non-corrupt, mature and ideologically anchored, truly knowledgeable about the critical issues at home and globally and cadres who are passionate about serving the party beyond material inducements” he said.

He added that the cadres should adhere to the correct line of the party.
“This means adhering to the fact that the people are the fundamental force to decide our future and destiny. Therefore, the formation of NRM Diaspora doesn’t and will not happen without attracting cadres who are truly transformed in the real principle of the revolution” he said.
Todwong said that serious violation of NRM party discipline and state laws have occured in the past years and these have resulted into harmful consequences.

He informed participants that since NRM came to power 36 years ago, a lot has been achieved in the areas of education, health, infrastructure, Agriculture among others. He however, noted that the same party is now begining to become a victim of its own successes as a result of demographic differences. He said after 36 years in power, the people who were liberated are not the same people NRM is leading today.
“The majority of the current people are children, grand children of the liberation stages and their understanding or appreciation of the past is determined by the current socio-economic hardship” he said.

He cited other challenges which NRM must pay attention to including the role of non-state actors like the NGOs, the church, traditional institutions and dealing with modern challenges of people’s expectations. Other issues of concern to the party is how to manage the ongoing talk of power transition according to Todwong.
And yet, the same party is battling with regional and global terrorism, foreign hegemonic wars between the West and East world’s super powers. He says such rivalry among super powers has ushered what he calls serious ideological disorientation which is being promoted by these groups.

“NRM now finds itself engulfed in the new set of challenges. Having fully embraced multi-partism, internal dissent as a result of various interests competing for power, youth unemployment, tribal and religious undertones are all steadily eating away the potency of the NRM” he says.
He noted that dealing with such challenges requires the ruling party to consolidate it’s structures at all levels including the Diaspora.
Todwong revealed that the party has embarked on a strategy to deliberately strengthen and upgrade the department of external affairs with a view of reawakening the revolutionary fervour of the NRM.

“The department will provide a common platform of interaction and collaboration with NRM Diaspora chapters, establish links and networks with foreign friends and partners, promote NRM interests including countering negative propaganda to the international community, attract investment in areas of Agriculture, tourism, minerals, oil and gas etc and liasing with our missions abroad to keep track of young Ugandans who are flocking foreign markets for jobs” he said.

Meanwhile, the NRM director of external affairs Maj. Awich Pollar, noted that for the past few years, NRM had negative publicity courtesy of the opposition.
“These actors have often told lies about NRM government. Unfortunately, development partners and potential investors who do not take time to verify these unfounded claims end up believing these false stories. This status quo therefore, calls for a need to caltivate a future for Uganda and transform NRM in Diaspora” he said.
The convention coordinator Lillian Ikulumet commended Gen. YK Museveni Tibuhaburwa for facilitating the convention and also championing bilateral relations and cooperation between Germany and Uganda.