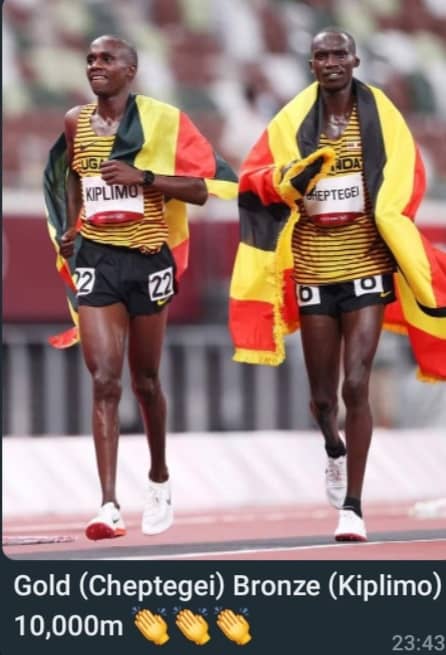 A tactical masterstroke from the Ugandan trio of Joshua Cheptegei, Stephen Kissa and Jacob Kiplimo ensured that World Athletics Champion Joshua Kiprui Cheptegei retained his crown as the man to beat over the 10,000m distance.
In a scintillating race at the 2022 World Athletics Championships held Sunday night at the Hawyard Field in Eugene, Oregon, USA, Joshua scooped gold in 27:27.43 shaking off a surge from Kenyan Stanley Mburu (27:27.90) and a host of powerful runners including Salemon Barega of Ethiopia and Canadian Moh Ahmed.

The beauty of it though is that Uganda also came third through Jacob Kiplimo whose bronze medal in 27:27.97 meant a repeat of last year’s podium finishes for the two teammates.
Ugandans will however be proud to learn that last night’s race was a near repeat of last year’s Olympic final race where another Ugandan in Stephen Kissa sacrificed himself by setting a blistering pace to tire the chasing pack to the advantage of his two victorious Sebei brothers.
Now a certified loyal and reliable pacemaker for Cheptegei, Kissa has been happy to do the donkey work for the Olympic 5000m champion. Fortunately, he has done so to good effect at several key races including the Tokyo Olympic 10,000m final and at the NN Valencia Day in 2020 when Joshua set a world record time for the 10,000m.

Last year at the Tokyo Olympic Games, Kissa paced for Joshua in the 10,000m final before dropping out with 8 laps to go thus enabling Cheptegei who had earlier won gold in the 5000m to finish second and grab silver.

BAREGA SCARE FIZZLES
In Salemon Barega, Cheptegei faced the threat of a man who ensured he doesn’t bag an Olympic double as he edged him to take gold in the 1000m in Tokyo last year.
In last night’s race, Barega showed intent to disadvantage Cheptegei when he surged past Cheptegei at the 5km mark in a time of 14:01. This was shortly after Kissa who led early on had given way for Joshua to lead the pack at 3km. Barega then slowed the pace, probably aiming to reserve enough energy for the final kick.

However, Ugandan super tactics came to play when Kiplimo took the race by the horns and blasted forward, upping the pace and resultantly splitting the race into a leading pack of about 15 athletes. Joshua then followed closely with 9 laps to go. But heading into the final two laps, Barega and Kenyan Stanley Mburu surged forward, further splitting the leading group into a hopeful pack of 8 runners who went through the bell for the final 400 metres. It is here that Cheptegei unleashed his lethal final kick to completely sweep away both the Ethiopian and Kenyan to win gold. Meanwhile, Kiplimo buzzed past a spent Barega to beat him into fourth place— in the process further cementing Joshua’s revenge on the Ethiopian.
The two medals are the first for Uganda at this year’s championships.

Nanyondo reinstated
The security men’s medals crowned a successful night for Uganda which had 1500m athlete Winnie Nanyondo reinstated in the finals of the race which will take place tomorrow (Tuesday). Nannyondo’s reinstatement was retribution to her unfair fall at the hands of Italian Gala Sabbatini who shoved her to the ground as she aimed to earn the last qualification spot in Saturday’s semi-final.

Following the fall, Nanyondo had been disqualified from the finals over failure to finish the race but Uganda’s officials appealed the decision which was then overturned in her favor.
Meanwhile, men’s 1500m Uganda national champion Ronald Musagala failed to progress to the final in the men’s edition of the 1500m after coming a distant 13th in his heat. Other Ugandan runners to complete their races include 2018 Commonwealth gold medalist Stella Chesang who broke the women’s national record over the 10000m she when recorded a time of 31:01.04 to finish 14th in the finals of the race which was won by Ethiopia Latesenbet Gidey at 30:09.94. Another Ugandan, Mercyline Chelangat finished 16th in the same race.