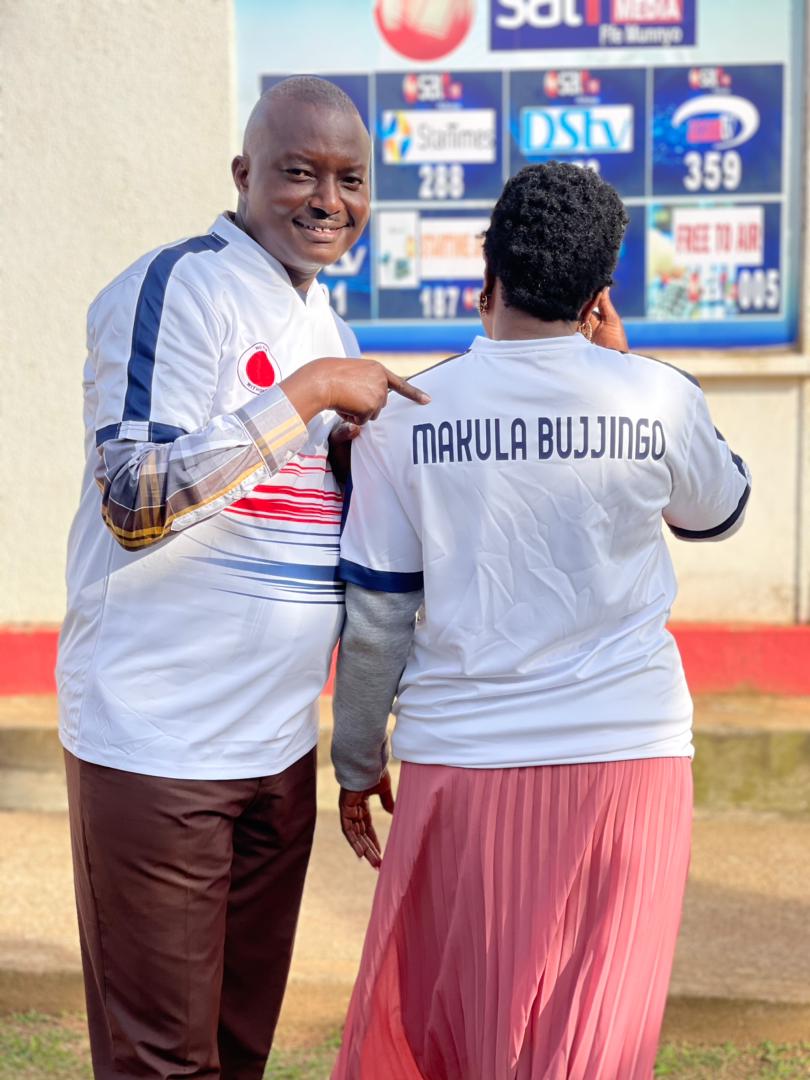 Celebrated city pastor, Aloysious Bujjingo, has called upon SC Villa fans to stop engaging in hooliganism if he and other SC Villa eminent fans are to return to watch the club’s games.

The House of Prayer Ministries shepherd made the call on Friday, moments after being lured back to the club’s ranks by Eng. Ben Immanuel Misagga, the club’s Vice President in Charge of Fans Mobilization and Coordination. Misagga who called on Bujingo at the pastor’s Salt media empire home in Lubaga, handed him a branded SC Villa branded jersey, also giving one to Bujjingo’s heartthrob Suzan Makula Bujjingo.

Misagga’s move forms part of his aggressive mobilization drive which he kicked off as soon as he was named the club’s Vice President by Hajji Omar Mandela.

It is worth noting that ever since he resigned the presidency of western Uganda based Big league club Nyamityobora FC and returned to his ‘first and true love’ (SC Villa), Misagga has embarked on a drive to reach out to every single supporter of Uganda’s most successful soccer club. Driven by his ‘NO FUN WITHOUT FANS’ ideology, the former Club President has resurrected hundreds of villa fans branches across the country with a view of getting all villa fans registered as members of the Villa Members Trust (VMT).

This, as earlier revealed by Misagga recently, will enable the club to cement its structures for a concrete community club in the league of the world’s top sides like FC Barcelona, Real Madrid among others.

It is through such a drive that he managed to reach out to Pastor Bujjingo, a longtime fan of the club.

Speaking moments after donning his branded team jersey, Bujjingo who was flanked by his sweetheart Suzan Makula Bujjingo, revealed that he is a lifetime fan of SC Villa but who had lately stayed away from the club’s games due to hooliganism.

Praying that Villa regains its past glory, Bujjingo revealed how back in the days he would attend the heavily thrilling SC Villa derbies which would even end in firing of gunshots due to violence.

He thanked Eng. Misagga for reaching out to him and other Villa diehards to lure them back to the club’s fold.

“Villa Joggo Salongo is back with a bang! I want to thank Eng. Misagga for hunting down villa’s diehards of the 1990’s. We were the ones who would watch Villa games at Nakivubo amid raining bullets,” he said.

He however added that he will resume watching the club’s games provided he is assured of safety and a cessation of hooliganism.

“We’re back with great zeal because once a villa fan then you’re villa forever! We wish Villa the best despite its current struggles. But we’re going to pray for our club to sail through these troubles,” Bujjingo vowed as Makula smiled from ear to ear.

Fans welcomed Misagga’s latest masterstroke, calling Bujjingo a very big fish that will help the club in many ways.