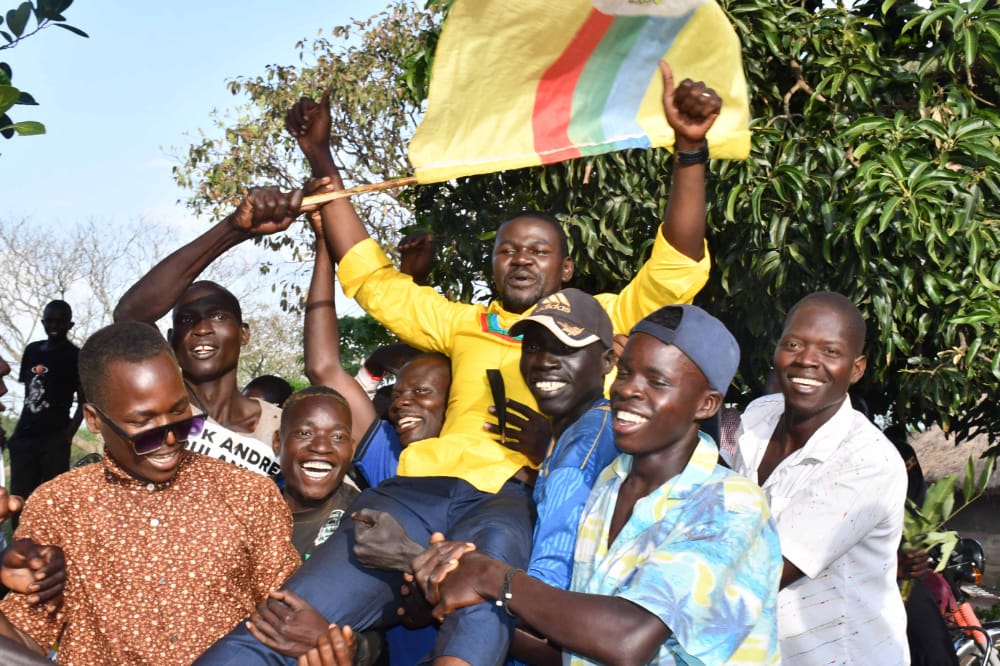 NRM Secretary General, the Rt Hon Richard Todwong has urged the people of Omoro County to make it easy for the party to lobby for services to the district.

Todwong says when the people vote for a party candidate, the party will add its voice to that of the MP when lobbying for services.

The Secretary General said this while addressing voters gathered at Acet Central ward in Acet Town Council in Omoro District.

“The party is like an amplifier, we add our voice to those of the NRM MPs,” he told the gathering, adding: “If you elect an opposition MP we cannot help in pushing for services through that opposition MP.”

Accompanied by party leaders from the NRM Secretariat, including the Director for Mobilisation, Hon Rosemary Sseninde, the Secretary General is meeting district leaders, LC1 and LC2 chairpersons as well as registrars. Besides garnering support for the party candidate in the Omoro County MP race, Andrew Ojok Oulanyah, the meeting is also targeted at addressing critical issues.

Todwong also urged the people present to rally voters in Omoro to support the party candidate and in that way facilitate the government to deliver its promises to the people. “Let’s vote for Ojok for continuity of service delivery to our people in Omoro. Let’s go and tell all our people who we lead that we elect Ojok Andrew Oulanya. To continue with the work that his late father Jacob Oulanyah had started,” Todwong said.

He reminded the people that the election of the next MP for Omoro County is a matter of national and global interest because of the weight that the former MP held. “On the 26th of May the whole world will be watching Omoro by-elections because the late Jacob Oulanyah was a leader who was known all over the world and people will want to know who is elected to replace him,” he stated.

Omoro will on Thursday, 26th May choose the next MP for Omoro County constituency. Also present at the rally in Acet are district party leaders that include the Omoro district LCV chairman, Mr Peter Douglas Okello, among others.

The SG explained that all NRM MPs meet the party chairman and President of Uganda, H.E Yoweri Museveni, to whom they present the concerns and needs of their constituents. “When you elect MPs we take all NRM MPs to kyankwanzi where the president meets each of the MPs one by one to listen to their problems,” he stated, urging the people to sit Ojok down after election and brief him on their needs. “When you elect Ojok, I urge you to sit him down and brief him on your needs that he has to go and present to the government for fulfilment.” The Secretary General reminded the people that the NRM party and its chairman President Yoweri Museveni are still here for a long time to come. “People should trust NRM because we have achieved many things for the people of Omoro though we need to do more,” he stated, citing the road to Moroto that needs to be tarmacked

The district chairman Okello Dauglas Peter welcomed Ojok in the field of politics. “I urge all of us to vote for the NRM flagbearer in Omoro county Ojok Andrew Oulanya since the party in power is NRM and therefore we shall benefit if he is elected to Parliament

He listed some of the issues that the district has fronted to government including the need to upgrade Lalogi Health Centre IV to a district hospital and the Health center III at Odek sub-county be upgraded to a health centre IV as well as tarmacking the Moroto road. He urged the Secretary General to support the move to start a SACCO for the party registrars where they can get capital for development.

Hon Sseninde explained that the party had decided to start campaigns at 11am and end at 6pm so as to allow voters, who are majority farmers to attend to their gardens. She said that the party was confident of victory going by the massive support shown by the crowds present for the campaigns.

The Secretary General later joined Ojok at two other rallies in Parwech in Omoro Town Council and Lujrongole parish in Lakwana Sub-county. Today is the third day of Ojok’s campaign in which he is preaching unity, reconciliation and development, in a bid to replace his father as the Omoro County MP.