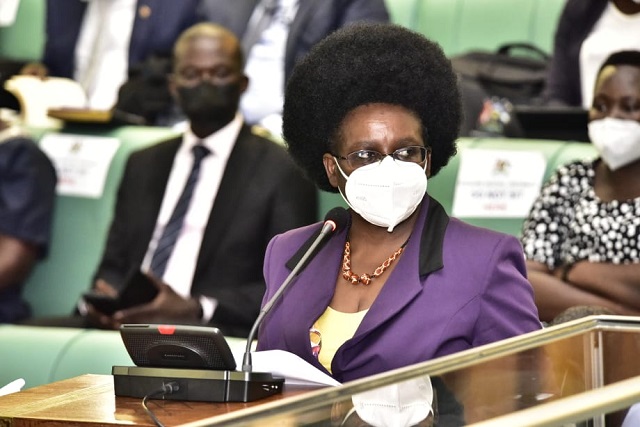 More MPs may soon suffer a similar fate as Mityana municipality MP Francis Zzaake Butebi unless they change the way they treat their colleagues.
One such a colleague is now the embattled minister for science, technology and innovation, Dr. Monica Musenero.
The speaker Anita Among has already put members on notice that she will not tolerate such behavior anymore after watching what happened to Musenero yesterday.

Anita has even threatened to drag such members to rules, discipline and previledges committee which recently handled fellow colleague Francis Zzaake Butebi. This committee chaired by Abdu Katuntu indicted Zzaake who was eventually kicked out of parliamentary commission over allegations of abusing then deputy speaker Anita on social media.
Now, with Dr. Musenero being in the news over her alleged involvement in thefty of billions of shillings that were meant for COVID vaccine-related research, some members had taken it upon themselves to humiliate and manhandle her like a chicken thug. One such a member is Rubabo county MP Naboth Namara who yesterday nearly thumped the Mugwere minister at parliament.

Besides Namara’s embarrassing physical action, the same members led by Ntungamo municipality MP Yona Musinguzi, have also spent some days gathering signatures to send the minister disgracefully from cabinet.
However, even as parliament indicted her and forwarded her to the IGG for further interrogation yesterday, Musenero nearly received hot punches from one of the angry legislators Naboth Namara (Rubabo county) accusing her of being a serious goon in cabinet.

“We are tired of people claiming to be professional doctors yet they are not. This woman is not a doctor. I tell you on your face that you’re a masquerader. We should get this country rid of masqueraders like you woman. You’re a thug who should not be near the president” the MP ranted as he aimed his slap at the embattled minister Musenero.
The charged MP could be seen even trying to make steps to administer his hot slap on Musenero who kept looking on in total disbelief. The member was retrained by cops in CT uniform.
However, the speaker Among has now come out and warned members against what she called unbecoming behavior towards others.

“Colleagues, I would like to strongly caution some of you on your conduct and decorum especially in as far as how you treat each other as Members of Parliament. I watched with disappointment a Television clip in which Hon. Naboth Namara the Member for Rubabo County publicly attacked the Honourable Minister for Science, Innovation and Technology; Dr Monica Musenero” she started in her communication from the chair slot.
She went on ‘How can a colleague attack and humiliate a colleague before TV cameras over a matter that is being handled in the House?”

She assured members that this kind of behaviour is despicable and unacceptable.
“I am cautioning you Members to treat each other with decorum and respect otherwise I will have to refer you to the Committee on Rules, Privileges and Discipline” he said.