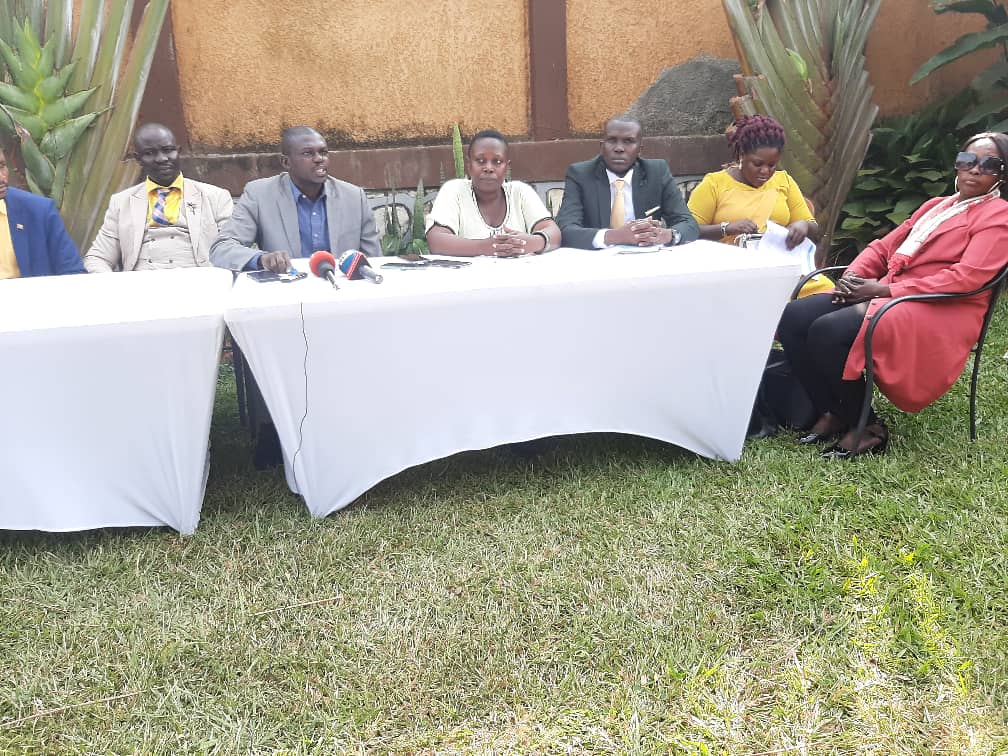 The group addresses the media this week on Wednesday

A group of NRM flagbearers who failed to make it to parliament in 2021 are secretly mobilizing themselves to storm State House next week, this News site reports.

The group enjoined in their Transformers Cadres Association is being mobilized to come to State House in their efforts to meet Gen. YK Museveni Tibuhaburwa who is the NRM party chairman.
We’re told those behind the secret mobilization are Tumugegerize Onesmus (flagbearer for Igara west), Taboola Didas (Sheema) and Businge Esther Wafula (Busia woman MP flagbearer). Each of these is holding an administrative position in their group.
The trio we’re told are in constant phonecalls to members asking them to converge in Kampala as the road to State House is being hatched.

Our Inspectors revealed that the decision by these people to storm State House arise from a recent meeting they held at NRM Headquarters where the leaders assured them that within one month, their issues would have been sorted.
The group claims they are now jobless having spent all their monies on now barren campaigns. Some are even hiding in the bush to evade money lenders who are on their necks.
This group on June 27 2022 staged a protest at NRM secretariat forcing the leaders to summon a meeting the following day. The meeting was attended by the SG Richard Todwong, Haj. Moses Kigongo and Mike Mukula among others. However, we understood that the leaders asked the group to abandon their plan of soliciting for signatures to change the national constitution on the election of the president. They were also told to abandon their plans to push for separation of the presidency from NRM leadership.

“Currently, we are facing a problem of having a party leader who is inaccessible because he’s at the same time the president. We want the two separated so that we can easily access the party chairman at any time” says an Inspector who attended the meeting.
However, in their reactions, the Kigongo group asked the flagbearers to abandon the ideas. He also allegedly promised to relay their issues to the president and they get a chance to meet him within a month’s time.

“It’s now over a month and we haven’t met the Chairman. This is why we’re mobilizing ourselves to go to state house uninvited next week. We have got critical issues to table to the chairman” says an Inspector.
The group we’re told first met this week in Entebbe-Kitooro area where they plotted the plan. They addressed scribes before they were disrupted by security. This planned riot at State House is part of the plan that was hatched six months ago as the group tried to meet the secretariat bosses but to no avail. They therefore resorted to protests on 27th but had planned the one for State House on 29th until the secretariat and Kigongo met them in between on 28th.

It should be recalled that this News site broke a story in September last year how there had been a secret plan to change the constitution to resort to Parliamentary democracy in electing the president instead of the current adult suffrage system.
Watch the space!