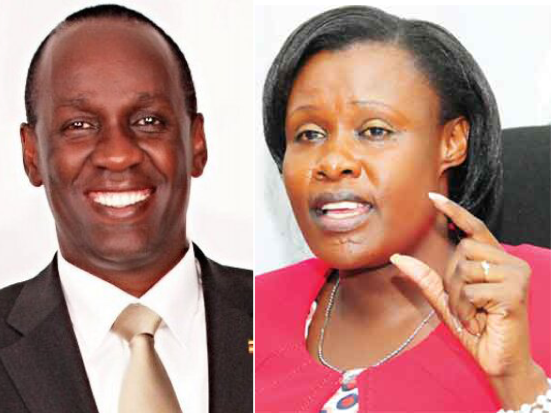 NRM vice chairperson for Eastern region fgt Capt. Mike Mukula is currently in the news over this rhetoric against Vice President Maj. Jessica Alupo who is also Katakwi Woman MP.
Mukula relaunched his rivalry with Alupo this week following the Soroti City East by-election which fortunately, their party NRM won under Herbert Ariko.

Mukula even addressed the media and assured the nation that Alupo was working with the opposition. But all this happened as Alupo carried on with her work and eventually, Mukula was kicked out the campaigns. The lady from Katakwi has kept a silent stature to date. However, our sniffing Inspectors are not seated!

To begin with, the two officials seem to be fighting over show of supremacy according to what we gathered. This is exactly what happened in the 1980s during Obote II regime according to Inspectors.
That time, Teso had giants including Col. Omaria, Peter Otai and Eteker Ejalu. The trio held good positions in the land and therefore each one saw himself as the bull in the Teso kraal. The same is happening now with Alupo being No2 of the country, Rt. Hon. Anita Among (Speaker) No.3 and now Mukula who politically views himself as the owner of NRM in the eastern region by virtue of his position in the party.

“What we’re seeing is what happened in the 80s. There was even a popular phrase among Itesots that where Col. Omaria sits, no person comes near. But we had Otai as a defense minister! So what we’re seeing isn’t new when it comes to Teso politics” says an Inspector.
According to Inspectors, the alleged battle between the two leaders is simply ‘egoism’ but as far as national order of precedence is concerned, Mukula holds no position of authority to challenge the Vice President.

“Perhaps Hon. Mukula’s bloated ego lies in his connection or leadership with the Arrow Boys. However, Alupo is a professional soldier accredited to military command and fully trained to head the army not an axillary force or militia like the Arrow Boys were” says an Inspector.
To prove how Alupo excelled in Military training, the President and Commander in Chief while at Resort Hotel-Mbale recognized and awarded her with a medal as a tough lady to have done one of the most difficult trainings in the army. On this day, he also awarded former Minister for Energy Eng. Irene Muloni with a medal for excellent work in improving the energy sector.
“Museveni hipped praises on Alupo as a tough and disciplined soldier who had gone through rigorous training (the rope) done by courageous and disciplined soldiers. But Mukula is a flight captain for civilian aircraft” says an Inspector as he distinguished the duo on career acumen.

Inspectors revealed that whereas Mukula is NRM Vice chairperson- Eastern, his office is only restricted to the NRM fans and doesn’t extend to the rest of Ugandans unlike that of Vice President which is a national office.

“The VP is a national constitutional office with all benefits and renumeration constitutionally provided. VP also has permanent military benefits and in which case, she exercises trappings of state power unlike the vice chairperson of NRM. His (Mukula) powers are derived from a partisan section of NRM national membership. VP is for all Ugandans and therefore if she talked to the opposition (that) is part of her constitutional scope as a national Vice President” our top inspectors said, adding that ‘so, the levels (between Mukula and Alupo) are not and can never be the same as of now and each should keep his or her own lane’
In all the accusations against her, Alupo is still mum about them as the Mukula camp continues to pound her all over social media.

Meanwhile, two weeks before the nominations for Soroti East took place, Museveni summoned Alupo. The two principals we’re told discussed possibilities of winning the by-election without incidences. Museveni first of all, explained how he was fed up with individuals in the party who had turned by-elections into a money-minting venture. For example, Museveni we’re told coughed out hundred of millions to the bigger rival to former speaker Jacob L’Okori Oulanyah who also wanted to stand against Oulanyah’s son Ojok in the by-election.
With this info known to some members within the party, Inspectors said some officials in NRM were trying to use the by-election in Soroti to make money similar to the Omoro situation. Museveni couldn’t accept this again!

He thus, directed Alupo to covertly reach out to all those formidable NRM people who wanted to contest against Ariko. The first person was the flagbearer of 2021 who was automatically the right person to contest but seemed to lack support. This is how Ariko got nominated. And Ariko having been an FDC before being finished out by speaker Anita Among, Inspectors said it was only natural to reach out to his former supporters in FDC so that they didn’t antagonize him. This is what Alupo allegedly agreed with Sevo before she invaded Soroti with her team that finally delivered the seat.

“She was on Mzee command and instructions to avert chaos from those who wanted to create (it) and make money. They thought money would come like in Omoro. The former NRM Flag Bearer was bought at 200m! So, with this (false) hope of making money out of the project, Mzee closed the tap.

That’s why they started breaking in people’s houses to cause a negative court ruling and another by-election” explained a top inspector.
We’re told like he has always done, Museveni chose this approach because he is looking at getting NRM votes from both sides in 2026. In fact, Inspectors said this approach landed security on credible clues of how a plot to use gangs armed with deadly chemicals had been hatched. Watch the space!