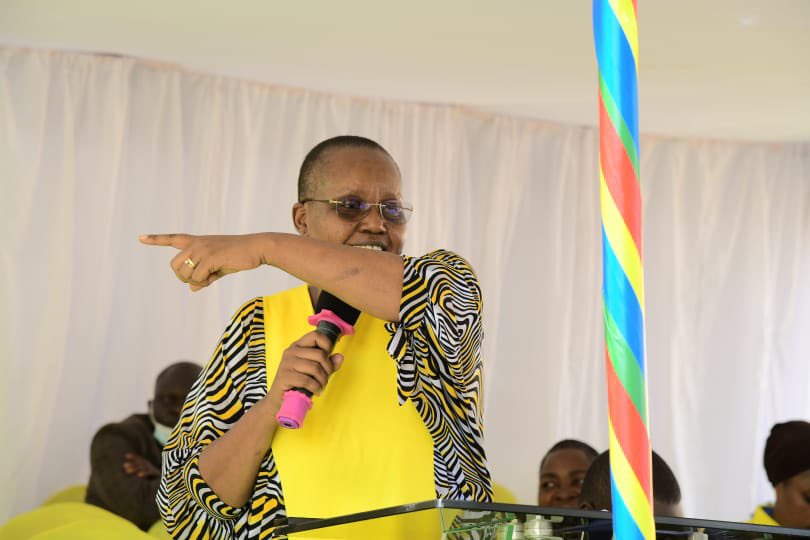 NRM party faithfuls in Mbale City are yet to come to terms with an a decision to make John Wambogo Wekesa as acting NRM chairperson.

Wekesa has stood endless times in now Mbale City but according to NRM top honchos in the city, he has nothing to show in terms of political clout.
And yet, the reigning Mbale district NRM chairman Masaba Muhamood decided to hand over the leadership of the city to the same Wambogo.

Viewed as a political non-starter, those opposed to his reign suggest that the Secretary General Rt. Hon. Richard Todwong needs to study the matter more closely and see whether the decision taken is going to fetch NRM support or to ditch it further!
Without wanting to oppose the SG, those clamouring for Wambogo’s ouster want Todwong to give a clear roadmap on when elections are going to be held to have a ‘formidable person’ take over the office.
Already, the ruling party is limping in the city with the Woman MP position being occupied by Connie Nakayenze Ggaliwango (independent) while the city mayorship is in the hands of FDC. The NRM however, has the two divisions (mayors) and also Mbale city northern division MP seat which it also grabbed from NUP by a whisker!

WHAT IS AT STAKE

John Wambogo Wekesa hails from former speaker James Wapakhabulo’s clan just as his (now late) rival Dr. James Mutende. Mutende is hubby to equally politically struggling Lydia Wanyoto who is the reigning NRM flagbearer for Mbale City and also chairperson NRM Women’s League. Wambogo has tried endless times to join parliament but his presence in the race is always as good as his absence.
Wambogo’s political loss CV dates back from the days Ambassador Jack Wamai Wamanga quit his job to join Mbale municipality MP race. To date, the CV continues to pile up even as he always gets the NRM flag!

And yet, FDC and or opposition has always held on to Mbale Municipality now promoted to City.

In 2006 Dr. Hassan Galiwango was the maiden NRM flagbearer for Mbale municipality but was again flattened by Hon. Wilfred Kajeke (FDC). He remained with his NRM flag until Museveni saved him with an appointment as Director- Mobilization at NRM Headquarters under SG John Patrick Amama Mbabazi.

Ggaliwango however, threw his support behind his wife Connie Nakayenze who thumped Nagudi Rutangye as Mbale woman MP in 2011.
Nakayenze has since extended her political wrath against Lydia Wanyoto. Wanyoto is the reigning NRM flagbearer for Mbale City but even her flag position couldn’t stop Nakayenze from defeating her as Woman MP in 2021 but on independent ticket. Not satisfied with the popular judgement, Wanyoto ran to court to challenge Nakayenze but the court piled more political misery on her after it ruled in Nakayenze favor!
This therefore means, Wanyoto and Wambogo are flagbearers in the City. Now, Inspectors suggest, that the decision by Masaba to handover chairmanship of the City to a seemingly certified political loser Wambogo was ill-informed but instead, the NRM electoral commission on the advice of the SG Richard Todwong ought to have organized elections to fill the position outrightly.

“In any case, Wanyoto being the woman MP flagbearer, suit this position of interim chairperson but not Wambogo. Wanyoto’s constituency is bigger than Wambogo’s. That is if flagbearers were to be considered for it” says an Inspector.
We’re told other party members say instead of giving it to Wambogo, a neutral person like Peter Magomu Mashate should have been made interim chairperson given his seniority and contribution to the party in Mbale as a whole.
“Mashate has been our AG in the Inzu ya Bamasaaba, he is NRM Diaspora League general secretary and also has been a flagbearer for that matter. Wanyoto is also suitable but unfortunately, she holds the position of CEC member!” Says an Inspector.
However, although Wanyoto is a CEC member, she technically qualifies to hold that position as well since even other CEC members are district chairpersons!
“Maybe the only problem is that her appointment to that office may spark revolts just like it’s doing on Wambogo. But she qualifies and it’s up to her to position herself for it in case it becomes appointive and not elective” an inspector said, adding that Mashate could do a better deal to NRM for now.

POLITICS AT A GLANCE

Although the Mayor for Northern Division George Mwanika is NRM and Industrial Division is Muhamood Masaba also NRM, the City remains firmly in the hands of FDC. This is because, the current innaugral Mayor of Mbale City Qassim Namugali is FDC and an ally of Nandala Mafabi.
“The FDC mayor is moving swiftly in filling top jobs in the city with FDC/ Nandala cronies. For example the slot of the Chairman City Land board was given to the FDC flag bearer for FDC Northern Division Consitituency Paul Mugoya Wanyoto. The City Service Commission was also given to an FDC supporter among many other strategic positions in the city to the exclusion of NRM” says a top Inspector.

The Industrial Division Consitituency was taken by an independent Karim Masaba but linked to Nandala and he inflicted severe political bruises against NRM flagbearerJohn Wambogo Wekesa!

The Northern Division was taken by the NRM Seth Gizangi Wambede who took the NRM Flag in what is reported to be a very controversial circumstance from another NRM strongman Barrister Peter Magomu Mashate who doubles as the General Secretary NRM Diaspora League.

In 2021, in NRM Primaries, Sezi Wambede defeated Mashate with a margin of 500 votes to take NRM Party flag but in the General election Sezi by a whisker as NUP candidate Ivan Masaba had laid a serious siege against him and only survived by 420 votes.

The president who’s also NRM chairman has already sensed danger and thus deployed Ahmed Washaki as the RCC of Mbale. It is this man who’s trying to help galvanize NRM support. However, there’s a suggestion that Washaki’s efforts could end up fruitless unless the issue of chairman Mbale City is sorted carefully. There are now efforts to file a petition with Todwong to guide on this issue. The SG has already indicated that the Wambogo Committee is in acting capacity. Those opposed to Wambogo suggest the SG needs to guide them on when elections will held to reduce on anxiety in the City.
Watch this space!

M7 Tells Ugandans in Diaspora To Invest In Uganda