The impression being projected by Uganda’s enemies that Uganda is in a crisis or that nobody is in charge is a figment of their imagination. Uganda is in firm hands.

Reading Mr. Gawaya Tegulle’s article in Sunday Monitor of February 13, titled: “UPDF: A plane flying erratically in clear skies – so, who exactly is the captain?”, you cannot help but see an attempt to portray Uganda as a stateless entity.

For a start, Mr. Tegulle says “Sometimes all you need to ask questions is a balcony, a nice folding chair and a cup of porridge. Don’t drink; just sip. That’s how I’ve been to perceive a plane, flying erratically in perfectly clear skies. Half of me wonders, who exactly is in the cockpit?”.

Right there is part of the problem. I suppose there are many Tegulles out there “eating life” with a spoon while lounging at the balcony of a nice edifice with almost no care in the world except looking one way and finding something to be cynical about.

Isn’t it telling that Mr. Tegulle feels in such a state of comfort as to while away his time on a serene balcony as “some other people” run the affairs of Uganda, but is still full of ingratitude and unwilling to acknowledge that there are some people in charge of things?

If the country was not in safe hands or “the plane was in turbulence”, nobody would find a balcony the most suitable location to be at any time; bullets and bombs would be going off, one would, may be, not afford the porridge or the cup it is in.

Next, he says President Museveni’s strategic plan for governing Uganda is “militarization”; that is, mainstreaming “the army into just about everything.”

I don’t know why the good learned friend believes that he can read the future in Museveni’s mind but if he is basing on previous appointment of military personnel in dockets perceived to be far out of military circles, I don’t think that that is how matters play out.

By the time the President makes such deployments, there is justification for them and they are within his mandate as Commander-In-Chief (C-I-C), and permissible in the Constitutional order. Nothing about seconding military officers to civilian territory presupposes that it is a sign of lack of control or a country in the throes of disintegration. In fact, it means that the country is on a more stable course, with a reliable and professional army that can provide diverse service to its citizens as and when need arises.

Where military officers have been deployed out of combat or non-military dockets, results usually vindicate the decision of the appointing authority/C-I-C.

The army is in good order, with effective command. The top hierarchy of the UPDF which Tegulle points out and says “you will never hear a word from them” is fully in engrossed in its role of securing Ugandans and their property. They don’t have to come out to address any matter in the public domain. Most of their work is done out of the limelight. The army has its public relations department.

The “silence” of the Generals does not mean that they are absent where they should be. Anyway, matters of Generals are for them but what is clear to the general public is that there is no deficit of stability as portrayed by Tegulle in his aeroplane analogy.

Not everyone has to come out to pronounce himself on Kakwenza.

That case cannot be the basis to judge an entire institution or state infrastructure. Attempts to soil the image of UPDF and show it as uncoordinated when it is undertaking major cleaning up operations like the one against ADF in DRC will not achieve much mileage.

Nobody should be made to doubt who is in charge of Uganda by those fanning winds of instability. Museveni is ably dispensing of his Constitutional powers and wields them in good trust now as has he has always done sustainably since first becoming President. His extended stay in State House is not by accident; he understands power, knows how to exercise it and has the goodwill of Ugandans. 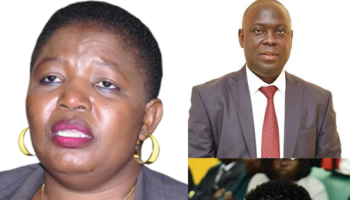