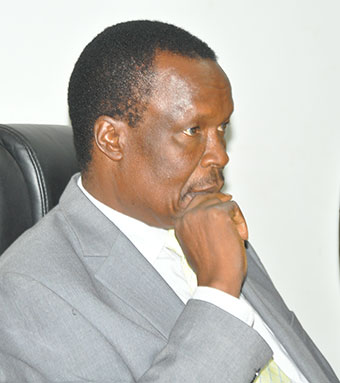 A month to the February 18 2016 elections, something secret took place at the ministry of water and environment. Here, four men entered a room and sat in their warm chairs but armed with a pen each! It is here that as the presidential campaigns took to the peak that these four men including a top opposition figure in Lango politics sealed a mega deal worth Shs4bn.

This deal which bordered on provision of water for irrigation however, has since stalled six years down the road. Left with no option, the opposition honcho has run to president Museveni accusing the water ministry officials of greed and sabotage. Not even the intervention of now internal affairs minister Maj. Gen. Severino Kahinda Otafiire has yielded fruits to him.

Ishaa Otto Amiza, the secretary general of opposition party-UPC but in this case the Executive Director Water for Life-Uganda is crying crocodile tears after a mega deal in which he was to bag some serious dimes has been frustrated by what he calls greedy people within the ministry of water and environment. This is contained in a two-page letter chanced on by our Inspectors and addressed to president Museveni. The letter is dated 20th/8/2020.

HOW IT STARTED
According to details, Water for Life-Uganda in 2015 embarked on a feasibility study of all the irrigation schemes in northern Uganda where it discovered a wider gap between the ministry and the beneficiary communities on irrigation technology.

From here, the organization conducted a comprehensive study and developed a beautiful proposal on the mechanism to realize the usability of the existing irrigation schemes and facilities. Upon doing this, it shared the beautiful proposal with the water ministry which fell for it resulting into a memorandum of understanding that was penned in 2016.

The company according to the letter to Museveni was obliged to ensure the empowerment of the communities of northern Uganda to adopt the use, operations and management of irrigation technology.

Indeed according to the MoU we also chanced on the two parties agreed that;
“This agreement is made in the knowledge that farm water use practices are crucial in achieving sustainable and integrated management of surface water management systems. From the dam to irrigation scheme, proper operation and management of irrigation works will improve the production and productivity of the irrigation schemes” the MoU reads in part.

It goes that ‘Under this MoU, the ministry shall be responsible for the overall coordination and supervision or project, including but not limited to; supervise and monitor the functionality of the project, Provide funds, Coordinate all stakeholders including the Local Government/respective communities in operation of irrigation schemes, Review and approve activities to be done on the pilot gardens and the reservoir and Participate in all project planning and implementation as need may arise’
As for Water for Life-Uganda, the MoU suggested that it was to ensure that use of modern irrigation as a new technology is adopted by the beneficiary communities, develop and implement strategies for optimizing the use of res

“All disputes, claims, controversies and disagreements relating to MoU should be settled amicably failure of which the MoU shall be terminated” the MoU summed up. It was signed Esimu Okurajor on behalf of the Permanent secretary in presence of Commissioner Eng. Richard Cong on 8/1/2016 while Otto signed on behalf of Water for Life-Uganda in presence of Otima Kenneth also a director at the same organization.

THE MESS
“Your Excellency, whereas the ministry signed the MoU with my company, the project never took off due to sabotage and conflict of interest among some of the officials in the ministry for water and environment. Your Excellency, after several failed attempts by Water for Life-Uganda to secure the necessary funds to implement the MoU, I have tried to seek your personal intervention towards the project but unfortunately, there hasn’t been a response from your office to this appeal” the letter reads in part. We understood that Otto on 15/8/2018 penned a similar letter to Museveni alerting him on his predicament only for him to receive no response. He also tried to go through then justice minister Kahinda Otafiire who allegedly promised to deliver him to the president to explain his woes but even here, things didn’t work out.

“All efforts to reach your office were futile. Your Excellency, you may note that Water for Life-Uganda was frustrated and cheated in the sense that; a lot of financial and human resources were deployed in the process leading to the signing of the MoU and yet this project was never funded as agreed in the MoU” he cried.

He added that upon engaging some officials in government and also seeing Museveni fighting to teach people simple irrigation technology (bottle), this is why he insists on fulfilment of this MoU and therefore wants the president to reign in on his men in water ministry to behave.

He thinks the president’s intervention will help the people of the north to benefit from this project in addition for him to recover his funds spent to do the feasibility studies among others.
He said the effect of climate change badly affects the people of the north and majority of them don’t know how to use irrigation technology to survive the dry spell.

“It is my prayer that this letter reaches you for your kind consideration and possible intervention. I am ready to engage with you personally to discuss possibilities over the promotion of irrigation technology in Uganda” he summed up.
What went wrong on this deal? Watch the space!