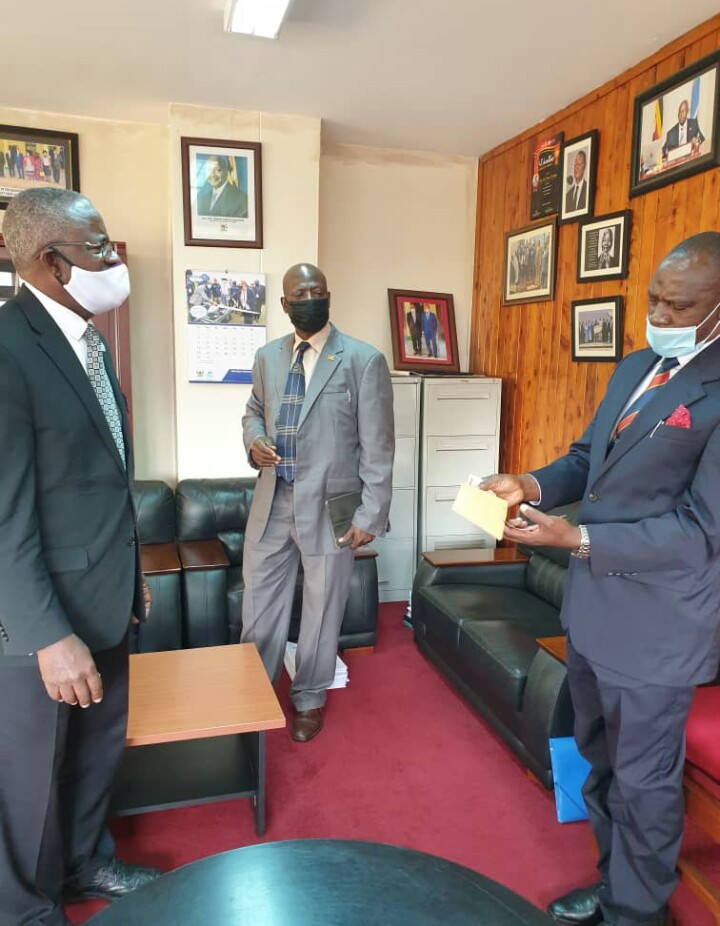 Prof. Luboga handing over the money at the Ministry of Education on Thursday

In yet another case of not-very-Ugandan conduct, a Ministry of education & sports (MoES) top official has returned money that a job applicant sealed within his application letter.

It is not clear for what purpose the money was put in the application documents. It is also not clear whether or not the said money was solicited from the applicant by any Ministry of Education official(s). However, such cases of money following applications are commonplace in Uganda where many job seekers get jobs after bribing officials on interview panels as well as selectors of new recruits.

As per reports, the money in question (whose amount was not disclosed) was discovered by the shortlisting team of the Education Service Commission; which then handed it over to its Chairman, Prof. Dr. Samuel Abimerech Luboga.

This is after ministry bosses decided to treat the money as having been accidentally left in the documents by the applicant who was seeking the position of head teacher pursuant to the Ministry’s February 2021 job advert.

Even if this particular money hasn’t been characterized as a ‘proper bribe’, the ministry officials’ act of returning the money has been commended as patriotic especially given the rampant corruption in the country.

The act evokes memories of a similar move that was pulled on the Uganda Police Force officials by former deputy IGP, Brig. Muzeyi Sabiiti. A story is told of how, at the end of his tour of duty, Sabiiti was left with unspent billions in operation funds. Once his transfer from the office was announced, his close aides and other top police bosses itched to drown in a cash bonanza as Sabiiti cleared his desk; with these monies classified under ‘classified expenditure’ which doesn’t require sophisticated accountability. However, we have since learnt that in an act of pure patriotism, Sabiiti shocked all and sundry when he declared the money to the authorities and handed all of it over in his handover report.

This left the ‘itching team’ frustrated and to date they have never forgiven him; with the word Sabiiti now covertly used in the police corridors as a colloquial expression for a “class one fool” for having rejected an opportunity for enrichment. Here at the Inspector we salute such selfless patriots that can even pass for endangered species in a country so corrupt!!!