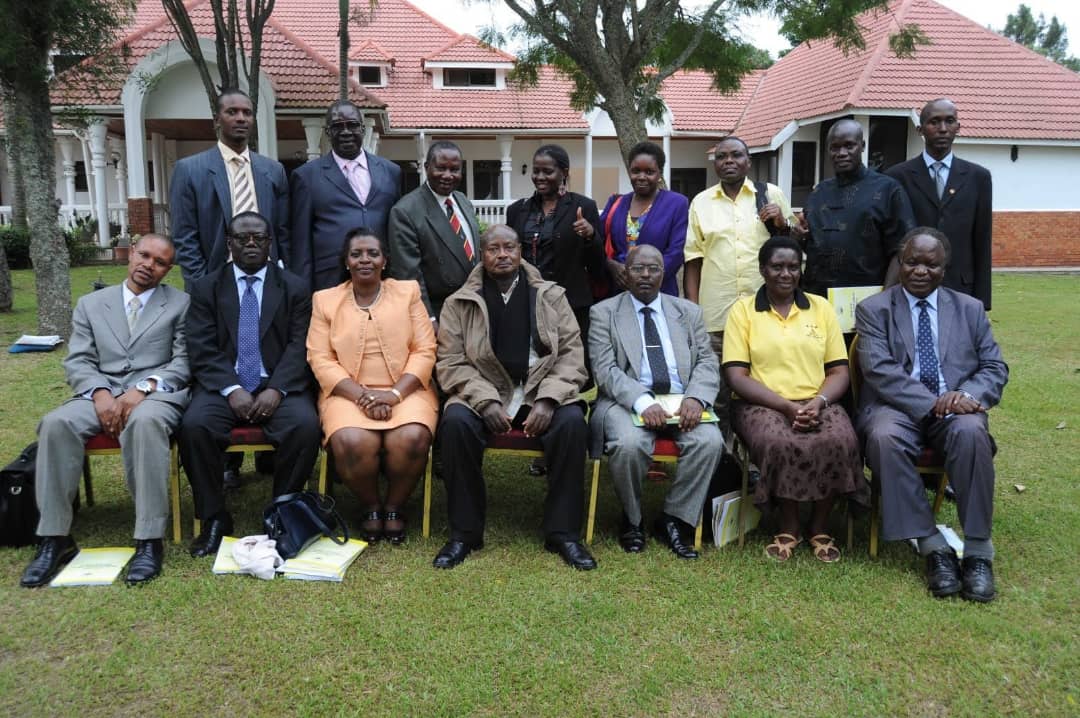 Zziwa and her team in Rwakitura

Exclusive details on how the ruling party-NRM is planning to transit from its current chairman and president Yoweri Museveni to another are hereby exposed for the first time.

In the plan, Gen. Yoweri Museveni is supposed to do one thing; anoint his successor preferably Gen. Muhoozi Kainerugaba and the political machinations begin full blast. Muhoozi however, so far to some extent faces former premier John Patrick Amama Mbabazi.

“He (Museveni) cannot pick but he will only anoint a person. At the moment, Gen. Muhoozi stands a better chance in NRM because he’s a youth and an accomplished soldier. However, there must be a silent coup within NRM guided by Museveni himself if this is to happen” a top NRM inspector told this news site.

DETAILS
Not so long ago, Gen. Museveni held a meeting. It took place at his home in Rwakitura. The meeting was attended by Margaret Zziwa, Arimpa Kigyagi, Bernard Mujasi, Magomu Mashate, Abraham Byandala, Ruth Tuma among others. This meeting was meant for Zziwa and her team to present a report to Museveni in respect of the gross indiscipline within NRM, unfulfilled pledges among other issues affecting the party at the time. The Zziwa team was baptized as NRM adhoc issues committee.

We got a brief that in that meeting, one of committee members Mashate proposed to the president that it was high time NRM considered tabling a bill seeking to create two chambers in parliament just like that of UK (House of Lords and House of Commons).

“Your Excellency, we have many people who have been in the party and served well but want to retire yet they are still useful. I suggest we create a special chamber to accommodate them so that we don’t lose their expertise” an inspector quoted him as telling the president in that meeting.
Museveni listened carefully and rolled his eyes in the socket possibly trying to critically probe into this suggestion. After some good seconds, he responded with a question that ‘but how would that work?’

It seems the one who posed the idea wasn’t ready to pursue it further, instead, the man kept quiet.
“Mashate didn’t develop it further. He kept quiet when the president tried to ask for details. It’s not clear why he kept quiet. Did he fear to annoy the chairman? No one can tell” an inspector told us.
Now, 10 years down the road, the same issue seems to be catching up with the party chairman if the country is to have a smooth transition.

WHAT’S ON TABLE?
We got it on proper grounds that for now, all eyes within the ruling party are glued to next year 2022. It is this year that is allegedly going to determine what will happen in 2025 in respect of Museveni’s leadership and transition for the matter.
It was stated that in the coming year, many things are going to happen most of which are related to whether Museveni stands again in 2026 or he hands over the mantle to a new person.

In the meantime, there are two proposals. Amend both the National constitution and that of NRM or to engineer a national referendum. The whole idea is to have a way to create a special organ/chamber to cater for the interests of historicals or senior leaders like it’s done in the UK where such experienced people are refered in the House of Lords.
“In order to have a fundamental change of political dispensation, you need a referendum. If this can’t happen, we need to take it through parliament” an inspector explained to us.’

The idea to use the national parliament is meant to cover the project so that it doesn’t look as though it’s only seeking to benefit the giants in the ruling party.

Back at plot 10 Kyaddondo NRM headquarters, the constitution is also supposed to be amended to create a special organ identified as Elders Council of Ideological Stabilization of the Party. This proposed council is different from the NRM’s Elders league or that of historicals.

The council is only going to accommodate mainly selected top NRM CEC bosses in CEC including Museveni, Haji Moses Kigongo, Rebecca Kadaga, Haji Nadduli and a few influential party bosses unlike the Elders’ league which has every tom, dick and harry and only appears to answer affirmative action issues in the party.

GEN. MUHOOZI FRONT
Currently, there’s a surge on social media platforms by individuals asking the CLF Gen. Muhoozi Kainerugaba to stand for president in 2026. In effect, the agitators are asking the president to anoint his only son Muhoozi to take up the mantle from him when he chooses to retire.

Indeed, even within the ruling party top brass, such calls for the CLF to succeed his dad are gaining weight by the day.
Our Inspectors revealed that for Gen. Muhoozi to ascend to the top, two things must happen. In the process of amending the national constitution, a proposal to change our country’s political setting from adult sufrage to parliamentary system must be done.

Secondly, Museveni must allow Gen. Muhoozi tl retire from the forces sometime before 2025. In so doing, Muhoozi is supposed to position himself for the position of NRM CEC vice chairperson for Western region. This will make him attend the top meetings of the ruling party. And because the national chairman of NRM is usually elected later, after getting to this office, he is supposed to seek for the chairmanship of NRM. When he does this and after a successful amendment of the constitution to revert to parliamentary system, Muhoozi is supposed to stand for an MP seat either in Gomba, Kiruhura or any part he will feel like.

“The work of the party will be to hunt for votes and have majority MPs. When they come and time comes to form government, there’s no way our members shall elect another person when our party chairman (read MP Muhoozi) will be in parliament. He will automatically become our flag bearer and president for that matter” an inspector explained.

When Museveni tactfullyrelingishes the chairmanship of the party, he; together with selected cream of NRM CEC bosses will head to the Elders Council of Ideological Stabilization of the Party to be created through a proposed amendment to the NRM constitution.

At National level, he together with his other team, will sit in the proposed special organ to be determined by parliament.
According to the proposal, the Elders Council will have limited powers over the party leadership playing an advisory role but if things run astray, it’s mandate may overrun that of the party.

“On the face of it, it will have some limited powers so that it doesn’t seem to antagonize the structures of the party. This will avoid suspicion by the new party leadership (young Turks). Therefore, the roles of the current CEC will shift to the council”

Both amendments according to the plan aim to give a soft landing to the current powerful leaders in the country so that there is continuity of peace and stability.

“The justification is that; you’re preserving political brain expertise. Even in the civil service, someone retires due to age cap but government goes around it and gives such a person a contract not as a civil servant but as a necessary expert or consultant. So, these elders may have retired but need to be preserved. It may appear as a weak group but when things become bad, they come in to give direction. This will give a clear transition from Museveni to Gen. Muhoozi” says an inspector.

To begin with, he’s a soldier and that according to the planners, the military has taught him discipline and conformity to rules or orders. Secondly, by Museveni maintaining Gen. Muhoozi as a Senior Presidential Advisor in charge of Special Operations, keeps him in executive to learn statecraft.

It is hoped that his military credentials plus his indirect role in executive, puts him at an added advantage so that by that time (of election as president) he will be superb. Inspectors also told us that already, Muhoozi runs a vast network within the Civil Service especially among officers at commissioner level. By the time he becomes president, these shall be the ones running ministries and departments as permanent secretaries or directors. In fact, we are told, Muhoozi is the one secretly helping his dad to detect and weed out goons in the civil service through his network. It’s this network that reports to him on the alleged misdeeds by some top technocrats in MDAs.

“Uganda’s army is a revolutionary one just like that of Cuba and Tanzania. It’s professional and ideologically well aligned to the original movement. The army therefore will always back a person it’s founding commander (read Museveni) will handover to. Revolutionary armies follow an ideology. This is why we have a female president in Tanzania and in Cuba, a brother (Laural) took over when Fidel Castro felt that he had done his part. The same can happen here. Museveni will become an advisor and the army will respect this anointed person particularly Muhoozi” an inspector added.

In the proposed plan, all old guards in the NRM party will have to go with Museveni.
“The old guards want to retire and remain around. This is the only way we can cater for them. It’s is the only was we shall have a bloodless transition because people want to settle. We have done our things and we want peace and stability to continue. We can only do this through a tactical silent coup within the NRM to have Muhoozi become next president. He’s got all it’s takes to continue with the revolution” am inspector knowledgeable on the machinations explained.

GEN. MUHOOZI ALLEGED HURDLES
However, whereas the ruling party would want Muhoozi to take over, there’s fear within the issue of Bobi Wine factor. Firstly, Bobi going by the official results by the EC, already has 38percent youths. On top of this, intelligence suggests that most teens aged 13 plus are singing People Power slogan. This, it is feared that by 2026, this fraction of teens will be of voting age and will automatically vote Bobi Wine also known as Robert Kyagulanyi of NUP.

It is for this reason therefore that allowing the next election to be under the normal practice of adult sufrage, this makes chances for Muhoozi to become president slim. It is also feared that even if Museveni returns, he will also face stiff challenge against Bobi. The only option is to change the system and return to parliamentary democracy.

“Direct election is very tricky for him. Even if he wins with 99percent, there will arise a question of legitimacy. It will be difficult for him to convince people that he won. Even questions of dynasty will now come in. So, it’s a big challenge for our general to win a direct election” the inspector said.

ENTER MBABAZI
Better refered to as Mr. Kololo, Amama Mbabazi is also being looked at as a possible successor. He’s reported to have the NRM structures which he can easily rejuvenate in case Museveni anoints him. Even in security circles, Mbabazi is said to have goodwill there as long as he gets Museveni blessings.

“Sevo can only annoint but not pick a successor. Those who want peace and stability to continue, will automatically follow his advice. He will annoint and find time to talk to those who are opposed to his favorite person. This will be done early enough so that by 2025, his choice will have a smooth ride” an inspector summed up.

Gen. Museveni has consistently said he doesn’t need to propel his son to power but instead, it will be Ugandans to decide who their next leader is.
Watch the space!