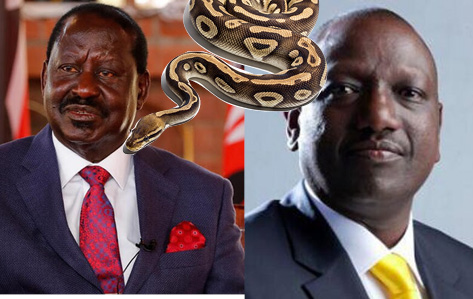 Kenyan political rivals Raila Odinga and his nemesis William Ruto are back in the pages after the former decided to challenge the latter’s presidential election victory.
The two rivals nearly tied; a situation that left the country’s Electoral Commission torn apart on which way to go.

Four commissioners wanted to cause a rerun as a compromise but the IEBC chairman Wafula Chebukati declared Ruto as having secured majority votes!
Raila has now gone to the Supreme Court seeking court to overturn Ruto’s win.
Without going into the ingredients of the case for not jeopardizing it’s outcome, our Inspectors have however, landed on valuable clues which makes Raila’s tribesmen (Luo) think his latest onslaught against Ruto might land him in State House.

Among the Luo where Raila belongs is a miraculous snake locally called Omueri.
This python is said to have lived in the 1980s until it’s death sometime in 1987. It was a 15ft long giant snake found in Kisumu where Raila hails from particularly Bondo town in Siaya county. Raila even has a mega home here.

“The Luo worshipped Omueri believing it brought fortune. The python was of a major cultural and religious significance to the region. It was considered a goddess of rain, bumper harvest and blessings” says an Jacob Odongo a Kenyan living in Uganda.
But prior to it’s death, there was a scuffle between the government and the Luo especially after government through it’s wild life agency chose to take the python away from their area to Nairobi (read Kikuyu land).

It is reported that among the Luo, the Omueri symbolized blessings, miracles, good harvest, rain and all fortunes man can ever dream of in his life.
Therefore, it’s is suggested that government took away the Omueri on grounds that it wanted to treat it following an injury during a wild fire. However, within three months of its absence from the Luo soil, a severe drought hit the area and the harvests were very poor. The natives led by Nyakacha county MP Ojwang Kombudo are said to have blamed government for this curse as it had taken away the Omueri, the rain maker and other miracles.
Unfortunately, the giant python died!

“Even when it died, the natives demanded for it’s remains to be brought back to Kisumu (Luo land) as they believed it’s absence was the cause of the season’s poor harvest” adds Odongo. We are told after 30years of haggling between the Luo and government, in 2018, the miraculous python was taken back to Luo land in a mega event organized by UNESCO.
To date, it is being kept in Kisumu museum and treasured among Raila’s tribesmen who now think it will have a greater say on Ruto’s alleged win if they invoke it’s ‘spirit’!

At the time of its evatuation to Nairobi, the Luo and Kikuyu were nursing a severe political rivalry arising from alleged failure by Mzee Kamau Jomo Kenyatta’s to handover power to the Luo.
It should be recalled that Kenyatta at the time of Kenya’s independence, had been jailed and the whites wanted his pal Jaramogi Oginga Odinga (father to Raila Odinga) to betray his pal and take over leadership. Jaramogi rejected this and instead mounted pressure on the whites to release the former fierce leader of Mau-Mau rebellion-Kenyatta. Therefore, when the decision to take away Omueri was taken, the Luo took it that this was a ploy by their rivals the Kikuyu who had plotted this with government of Arap Moi (Kalenjin) just like Ruto.

At that time, the Kikuyu were still powerful in government even as Moi was at the whelm of leadership.
“The Luo became furious about the transfer of Omueri and suspected the Kikuyus of being behind it to weaken the Luos culturally and politically. When you take away the bread winer, the rain maker, it means you want us to suffer” adds an Inspector adding that even when it died, the Luo asked for it’s remains to be taken back to their land.

The Luo-Kikuyu ruvalry continued to manifest itself when another situation occured around the same year after a prominent lawyer identified as Silivano Othieno died. He is said to have left a Will to be buried on his plot in Nairobi (Kikuyu land).
Othieno (a Luo) had married a Kikuyu lady identifed as Mwambu Virginia who insisted on burying her husband in Nairobi as per the Will. The Luos opposed this idea suggesting that Othieno was their son and they couldn’t allow him being buried in a ‘foreign land’

The widow ran to court and after a protracted court battle lasting five months, court finally decided that Othieno be taken back to his Luo land.
“The Luos again viewed this as an attack on their tribe by the Kikuyu. In the interest of keeping the relationship between the Kikuyu and Luo, the late’s Will was set aside and Othieno was taken back to Luo land after 5months court battle” explained an inspector.

Inspectors suggested that the politics of Kenya especially the unity between the Luo and Kikuyu that saw Uhuru Kenyatta backing Raila Odinga for President was part of the wider plan to have the two big tribes unite.

With Odinga going to state house, it was meant to cement the hitherto lost love between the two tribes after Jomo Kenyatta didn’t hand over power to Oginga but instead it went to Arap Moi.
And to reach this current relationship, it wasn’t an easy task but instead, it required a lot of benchmarking especially from how President Museveni has managed to work with the Luos in Northern Uganda who had rejected him for 20 years and even picked up arms against him.

“The way he managed to capture the north was a big lesson to Uhuru. Museveni played a catalyst role to the two Kenyan long time rival tribes. To see that they agreed to work together, it was something they learnt from Museveni” says an Inspector, explaining why Odinga and Kenyatta have always paid visits to Gen. Museveni.

Indeed, after two decades of voting for opposition, the north and north west this time round all voted for President Museveni and his NRM. The president has reciprocated by appointing them to higher positions in government including that of NRM secretary general, Chief Justice, Vice President, Speaker of Parliament, Government Chief Whip among many other top positions in MDAs.