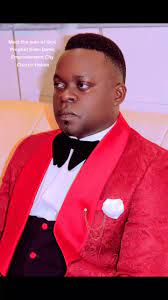 A prominent city pastor shocked the nation after he descended on his ‘sheep’ and flogged them mercilessly while swearing tribal slurs at them.

In an act that can pass for an ungodly gesture, Prophet Denis Kintu while at Empowerment City Church (ECC) at Kyesiga, Hoima City last Sunday caned his followers, particularly choir members after they committed a mistake which he says is meant to derail him. To make matters worse, the ‘Man of Rod’ committed the diabolical act which is even banned by the laws of Uganda during a live Sunday service, with the entire horrific episode captured on live TV.

During the beatings, Kintu is seen calling out the singers one by one as he orders them to lie on their bellies so that he could unleash divine beatings on their buttocks. Even worse still, the beatings happened while Kintu disrespectfully assured his terrified and wailing followers that they were meant to exorcise them of the “Bunyoro demons of stupidity”.

“Nze siri munyoro, nja kubamalamu obusiru! Gino mizimu gyennyini egigenda n’emiggo!” the man of rod boasts, literally meaning “I’m not a Munyoro so I’ll whip you to take that stupidity and demons out of you.”

It is not very clear what crime the sheep had committed but the video has angered many Ugandans; especially given that among those flogged were old women fit to be mothers of the nation.

For instance, while reacting to the video, Aggrey Valen Rwahwire rallied all Banyoro to evoke the spirit of Kabalega and fight for the rights of fellow Banyoro who were flogged.

“Abanyoro tujogerwe! Kintu Denis of Kyesiga Hoima at some church on Sunday was beating entaamaze nabarangira nze siri Munyoro njabamalamu obusiru…. Surely how can you abuse your hosts like that even if we are very friendly and hospitable people? It doesn’t mean we are very stupid. .”

Kintu’s impunity comes barely a week when bishop Jacinto Kibuuka of the Evangelical Orthodox Church, located at Mamre Prayer Center, Namugongo was sent to the coolers for assaulting a 14-year-old boy for allegedly stealing his Shs40,000. The bishop who broke off from the Catholic Church over indiscipline-related issues is accused of torturing the boy to the point of being admitted to hospital in critical condition.