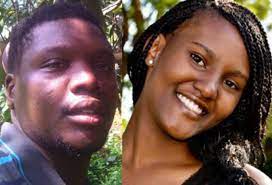 Jailed opposition kingpin Col. Dr. Kizza Besigye will rue the burden of poverty after learning that while he failed to raise just Shs30m cash bail money, a family of a fellow doctor paid a whopping Shs150m bail without flinching at all.

The unusual display of financial muscle in this biting economic crisis happened at Mukono high court during the murder trial of fugitive medic, Dr. Matthew Kirabo.

Kirabo who is accused of murdering his girlfriend Desire Mirembe in July 2015 fled the country after learning that the noose was tightening on him over the same murder.

Before he fled however, his sureties were being held on a non cash bail of Shs150m pending the disposal of the case.

But even after he fled, trail continued in his absentia and on Monday Justice Henry Kaweesa convicted him for Mirembe’s murder and also adjourned his sentencing until he is arrested.

But because he was not around, his sureties were ordered to post cash bail of shs150m, which they instantly paid without first making any frantic calls to relatives and friends as would have been expected.

The particulars of the case indicate that on about July 10th to 11, 2015, Dr. Kirabo killed Mirembe at Lugazi Kawolo Buikwe District, following a relationship dispute. That this was after he lured her to Nakumatt Oasis Mall under the pretext that he was going to discuss their souring relationship.

The pair, however, first had a few eats at Cafe Javas before moving to the Nakumatt parking where a fresh argument ensued. It is said that at about 10:00pm, Kirabo bundled Mirembe into a car and drove her towards Jinja, but branched 50 meters off the highway into Lugazi Sugarcane Plantations where he slit her neck and abandoned her corpse there. The body was recovered on July 11, 2015 by locals who saw it. Kirabo later reported himself to the Police and was arrested. And via video recording and charge and caution statement, he confessed to the murder of the then Makerere University student.