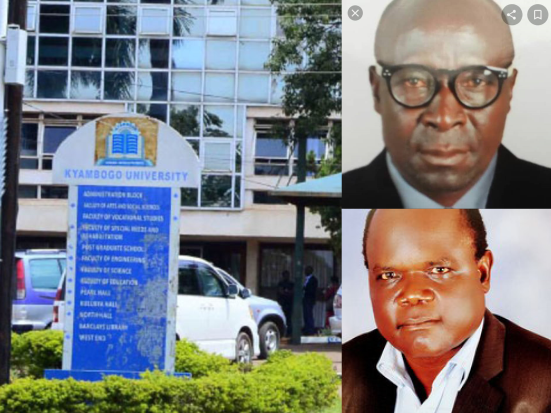 P7 level Kyambogo University lecturer David Onume alias Peter Agole managed to ride his luck too far with forged papers for a whopping 28 years due to an insatiable appetite by many of his bosses to enjoy millions from the project he hijacked from his colleague, Solomon Ongora, The Inspector has exclusively learnt.

According to documents accessed by our Field Inspectors, Agole’s bosses knew as early as 2015 that he uttered a false UCE certificate for employment as an askari at the public university in 1994. However, a complex web of nepotism, favoritism, negligence and later conflict of interest thrived to cushion his ineptness for all those years. A clear analysis of events shows that Onume’s seemingly endless luck was perpetuated by a ruthless survival instinct which saw him somehow always recruit those supposed to stop him in his tracks into his folly and make them flow with his tide. This explains why his resolve to constantly ride his luck even harder after realizing that his would-be supervisors were almost hypnotized by the trappings of life which oozed off him and so would do anything to protect him.

History shows that from Napoleon, biblical Moses, Idi Amin and all other great men who shook this world, LUCK played a very significant role in their rise to greatness. The same can be said of Onume’s rise at Kyambogo University from a lowly semi-illiterate guard to a Master’s degree holding employee.

Onume’s luck presented itself through strategic academic assistance which he always received from his lecturers who were essentially his co-employees. These ensured that Onume somehow passed every exam he sat, most times with the very basic marks just enough for him to pass. As expected, this enraged Onume’s fellow students who felt shortchanged by the unfairly special treatment which was being accorded to him. They thus complained to the authorities although onume’s boundless luck meant he always somehow emerged from such complaints and attempted disciplinary action totally unscathed. For instance, while a one Paul Bogere complained about Agole’s plagiarized Bachelor’s degree research work, even at Master’s level a complaint was raised that he had used the original research work done two years earlier by a one Denis Kintu.

Sources say that following a complaint raised by a student, an independent panel of supervisors rejected this particular work. However, instead of facing reprimand, Onume simply became lucky when the University simply changed his supervisor and co-supervisor to Dr. Titus Watmon and Dr. Benson Okello. This change, however, would be the blessing Onume needed as it meant him being supervised by his kin and kith. According to exclusive sources, Dr. Okello, a professor of History, was Onume’s Comboni College OB who also doubles as his maternal cousin. It also emerged that apart from the two men being OBs, they are blood relatives and business partners of sorts who both own commercial properties at Minakulu in Oyam district. “The contention was that being Onume’s OB and relative, Dr. Okello was very much aware that Onume never completed S4 and therefore the UCE certificate wasn’t his. But by keeping quiet about this anomaly, it was impossible that he would impartially supervise Onume’s project,” the source said.

For the case of Watmon, it emerged that he and Onume were guilty — together with the University — of dubiously appointing the former as head of Mechanical & Production Engineering. This therefore presented a moral dilemma-cum conflict of interest conundrum. Details of this scam were contained in a January 7, 2019 official complaint letter which a member from the mechanical engineering department wrote to the university’s Quality Assurance Director, Sister Dr. Kaawa Goretti.

In this letter, the member of staff wanted Watmon’s appointment to be rescinded on grounds that it was done in contravention of Section 54 of the Universities & Tertiary Institutions Act 2001. According to this law, a head of department, faculty, institute, college or other academic body at a university or tertiary institution can only be elected by the “academic staff” of the concerned department and then recommended to the appointments board for approval.

But in Watmon’s case it was Agole Peter (Onume) who nominated him, seconded by Okwany Amos, a retired lecturer who was teaching at Kyambogo on part-time basis. When scrutinized under the law, this appointment was erroneous because Agole’s position of Senior Technician is an administrative rather than academic role. He was therefore not authorized to nominate an academic head of department.

The complainant further argued that because the university looked on as this anomaly thrived, it would later lose millions in court costs when Agole (Onume) riding on such false precedent, took the university to court seeking to be treated with the full benefits of an academic staff which he claimed to be.

“This demand was probably compelled by his conscience that he nominated the head of department successfully as an “academic staff” and therefore he is already once such,” the petitioner told the quality assurance director.

In fact, sources added that Agole nearly defeated the university but only the National Council for Higher Education (NCHE) saved the day.

It is said that having been coopted to the case as a witness, NCHE scrutinized Agole’s academic papers and clearly made a declaration that there was no way Agole would even work as a junior lecturer because he had poor grades.

“National Council for Higher Education clearly found out that Agole Peter (senior technician) has a pass first degree and therefore completely not suitable for teaching as academic staff. In any case he has never been timetabled as academic staff even on part time basis throughout his employment record at Kyambogo University,” the petitioner further wrote to Dr. Kaawa.

The petitioner added that due to the above history, the two men were bosom buddies whose mutual indebtedness to each other had already caused a number of abuse of office and mismanagement challenges at the mechanical & production engineering department.

“…It can be deduced that the current head of department, Dr. Titus Watmon Bitek is obsessed with actions of unjustifiable rewards and favors for whoever is his friend, business compatriot and relative to the detriment of other capable staff and university at large; moreover using allegedly an illegality of status as the said head to mechanical department,” the staffer argued.

Records in The Inspector locker room show that the January 2019 complaint against Agole had little chance to be acted upon. This is because evidence shows that the university seemed to be aware of his rugged qualifications and methods of work. However, it is apparent that moving to stop him was going to be hard because the same administrators including the quality assurance director had already enjoyed some money courtesy of “his” project.

For instance, on December 13, 2018, Agole wrote to the Director Research & Quality Assurance proving how he had gone to Mt. Kenya University to present a paper on ‘his’ liquid smoke project on October 19-21, 2018. It has however emerged that Agole went on this trip with a team which comprised the Vice Chancellor Prof. Eli Katunguka, the Quality Assurance Director herself, and Head of Department, Dr. Watmon.

Sources say that Agole (Onume’s) challenges with articulating the queen’s language clearly could explain why he always moved with an entourage when going for these presentations. Besides, he also had problems explaining this project to its nitty-gritties because apart from his problems with the English language, he did not know some of its crucial parts having simply hijacked it from Solomon Ongora, its brainchild.

We have also learnt that the university was aware that in his position of employment as a technician, Agole was by law not permitted to be funded by the university to present any paper on its behalf. This is because according to prescribed law, one can only present such a paper suing university funds if he is at the level of a SENIOR LECTURER and above.

But as earlier stated above, Agole with his PASS bachelor’s degree did not qualify to be a lecturer; there was therefore no way he could be a senior lecturer because the qualification for this post is a PhD backed with published research in an international academic journal.

However, because Onume had lucrative business (project) which enabled his bosses to earn some dollars in per diem and air tickets, these bosses somehow found a way of falsifying his employment status for purposes of aiding the requisition of funds by him.

Evidence of this is contained in a copy of minutes of a faculty of research, grants and publications committee meeting which was convened in the dean’s office at 10:30am on November 14, 2017.

Chaired by Dr. Jacob Nyende, the head of civil & building engineering, the meeting’s main agenda was consider grant applications for Agole Peter who was slated to travel to Homa Bay in Kenya to present his liquid smoke research on November 20th-25, 2017 at the 3rd International Psychology Congress. The other person under consideration was Ms. Phionah Nabukenya, a student of Telecommunications Engineering who had been invited for the TELFOR Telecommunications Forum in Belgrade, Serbia on the same dates to present her research. The meeting successfully approved US$2500 for Agole and $4080 for Nabukenya respectively.

However, the most peculiar thing about Agole is that during the registration of the (6) members present for the meeting under Minute 1.0, Agole was named as a “Senior Technician Mechanical”. However, when it comes to the part for consideration to be granted the travel money (under Minute 5.0.1(i) he is referred to as a Senior Lecturer In The Department Of Mechanical & Production Engineering”.

It is in this new title baptized on him that he secured funds for similar trips both within and outside Uganda. Evidence on our desk shows that he went to such local trips on December 20, 2017 and January 11-13, 2018 where he presented his project at the Pastors’ Conference and Youth Conference respectively under the auspices of the Pentecostal Assemblies of God (PAG). On both occasions, Agole (Onume) was invited by PAG West Lango pastorate leader, Bishop Richard Adupa.

For comments or more information on this story,

NB: Watch this space for details on how the IGG has moved to dry up Onume’s luck!!! 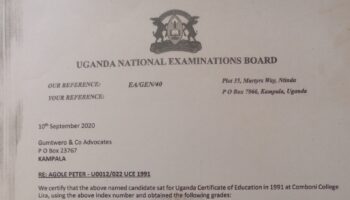