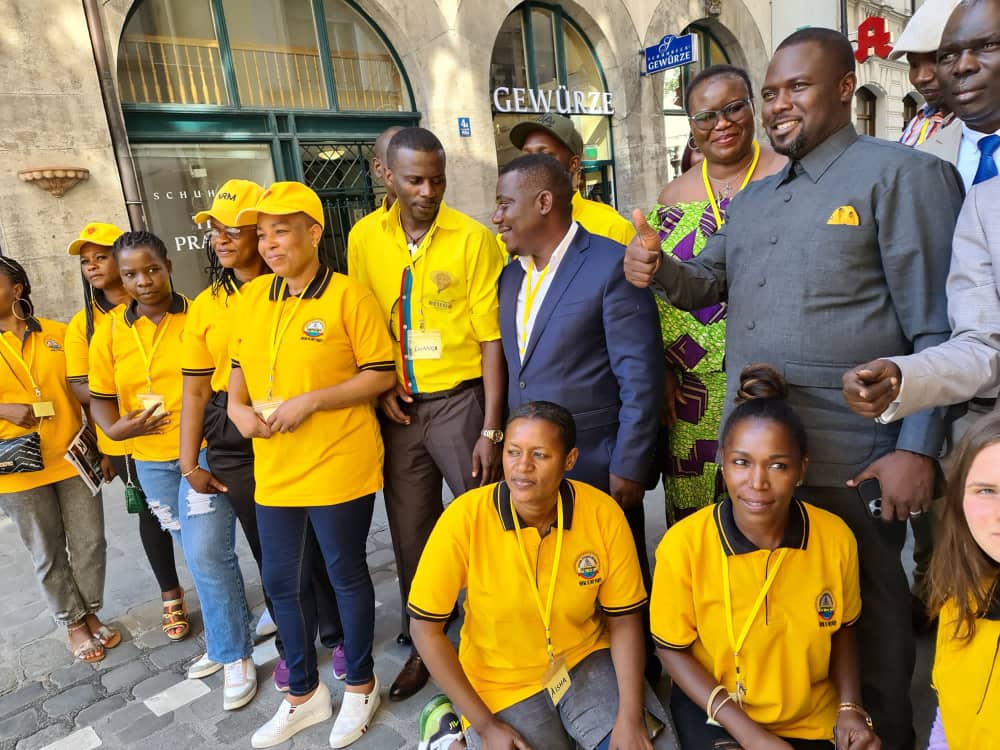 SG Todwong poses for a pic with some delegates

Ruling party-NRM is working out a plan to storm the offices of the Mayor of Germany city-Munich protesting what the party calls unfair treatment.
This stems from alleged efforts by the Mayor to block the NRM European Diaspora Convention 2022 that had been booked to take place in Munich from 15-17th last weekend.

The mayor according to our Inspectors worked on the basis of a petition filed by exiled novelist Kakwenza who sought to block the convention on grounds that it was being organized to propagate the ideals of what he called a brutal regime in Uganda.
“We’re taking a protest letter to the Mayor. If Kakwenza told him that our government is brutal, it was only fair for the city Mayor to also listen to our side as organisers of the convention. We were not given this opportunity and we only saw a high level of sabotage” says a top Inspector in NRM.

On July 1-3, the NRM was supposed to hold it’s Diaspora Convention in Munich Germany. The meeting was however, called off after the would-be guest of honor NRM Secretary General Richard Todwong got engaged and the meeting was pushed to mid July by two weeks.
Everything went on as planned with bookings being made for the venue and related conference requirements. The organizers had even booked a posh hotel identified as West Inn Grand Hotel until on Monday last week when they were called to break the sad news to them.
“The hotel owners told the organizers 4 days to the convention that the hotel rooms were full. That their contact person at the hotel didn’t know the hotel was already overbooked before admitting us” says an Inspector.

Ironically, even after having been paid in advance 15000 Euros and the flimsy excuse for termination of contract, the hotel up to now hasn’t allegedly refunded the dimes!
“The hotel hasn’t yet refunded” says an inspector.
At this point after being sabotaged from West Inn Grand Hotel in the heart of the City, the organisers struggled to look for another hotel but being that it’s a summer season, it proved a bit of a challenge to get one.
Out of that panic with the conference date of July 15-17 knocking, the organisers decided to travel some good miles away from Munich and finally secured another hotel on Friday. The 5-star hotel was identified as Vierjahreszeiten. Here, they were pretty sure that at least the saboteurs had been delt a big blow since it was secured on the last minute and moreover about 47km far away from the city.

However, Inspectors revealed that even as they warmed up to the event, an ugly call from Police came informing the hotel managers that there was a looming huge demonstration by over 2000 Ugandans who were going to storm that hotel protesting against this meeting.
“The hotel informed us on the last minute that our meeting couldn’t take place. They said they couldn’t risk having 2000 demonstrators around their hotel and also risk the lives of their other visitors. They feared for their image as a hotel and ordered us out. But from the beginning, everything with this hotel was going on smoothly until the sad police call came to the hotel” explained an inspector.

We’re told the police claimed they had registered this huge demo and alerted the hotel to be aware and take a decision. This was how even the second hotel flopped on the last minute.
“Our problem is not about the conference you intend to hold here but the big number of people (demonstrators). It will put the hotel name at risk and our guests. So, we cancel” an inspector quoted the hotel as telling the organizers.
Upon being evicted even here, the organizers made frantic calls to pals who would know some places they could hold the meeting.
Eventually, according to Inspectors, the organisers were informed of a certain big restaurant with a conference facility in town. This is how they ran here and finally settled to conduct the meeting successfully without any ugly scenes.

Totaling about 200 delegates, the participants were ushered into the conference room but with a warning that the staff weren’t enough to keep serving the guests.
“So, they served enough drinks at once until lunch and dinner came. They didn’t have staff” says an Inspector.
Eventually, the meeting took place with the SG also being able to hold side meetings with several people including potential investors.

We are told a few days to the convention, one of the Ugandans in Germany held meeting to launch a book. She invited exiled Dr. Stella Nyanzi as guest speaker. The chairman of Ugandans in Germany who’s also NRM chapter chairman for Germany-Micheal Lwanga was also invited.
While here, Nyanzi who was spotted with a certain mzungu identified as Conrad, allegedly asked Lwanga why he supported NRM, a party she calls ugly and tainted with blood.
Speaking in Kabaka’s language, Nyanzi stated thus: “Ggwe omusajja omulungi bwaati, owagira otya ogubiina gwa NRM ogujjudde ebibi?” she asked meaning ‘a handsome man like you, how do you associate yourself with an ugly party NRM?’

Lwanga we’re told, informed Nyanzi that ‘madam, it’s not about the looks but ideology’
During his time to give a speech, Lwanga had hinted on the impending plans to have the NRM Convention and was due in a matter of two weeks. He told Nyanzi that whereas it was being organized under the NRM, the issues for discussion weren’t political but were intended to allow Ugandans in Europe have a chance to interface with government officials and NRM as a party. Therefore, if was open to all Ugandans regardless of their political beliefs.

It was out of this statement that, even Nyanzi asked for an invite which was dully given to her through an email. We’re told she even asked who the guest of honor would be and they informed her the SG and the director of External Affairs at NRM secretariat were coming.
“Are you sure the SG is coming? I want to engage him in a discussion. If you give me an invite, I will come. I am tired of politics of fights. Why can’t we sit and dialogue? I want to engage with your SG if he’s coming (for the convention)” an inspector quoted her as telling Lwanga.
All along, her mzungu pal was nodding in approval severally saying that ‘its good to come together. Uganda needs people like you (Lwanga). Bringing people together to discuss issues affecting them. Dialogue helped Germany a lot’

As the discussion went on about the impending convention, Nyanzi kept asking for the venue of the convention but her eyes somehow betrayed her forcing Lwanga to keep it a top secret.
“We suspect she wanted to know the venue to be able to launch her battles. When an invite was sent to her, she posted it”

Contacted for a comment, the convention coordinator also the general secretary of NRM Germany chapter Lilian Ikulumet was cagey with details. She said the convention went on well in spite of incidences of sabotage by some elements.
“What I can say is that the convention was successful. We held it but amid many challenges. Some people wanted to fail the conference working with all sorts of groups here. We’re taking the matter to the leadership of Munich to tell us why it’s good for others to easily converge and it’s bad for us” she told us when contacted.
We also talked to Lwanga who confirmed our story.
“The so-called 2000 demonstrators; that number was exaggerated until we learnt that it was sabotage. Uganda being a country that doesn’t agree with homosexuality yet those of Kakwenza were fronting them, this was a precursor to our ordeals. But good enough, we finally managed and we held it in Munich city center without their notice” he said, adding that SG Todwong said the matter would be addressed at government to government level.

“Its the Germany embassy which issued our Visas to come here. Our relationship with Germany goes beyond an individual like Kakwenza. I want to assure you, there was no protest at all. However, we went through a lot and the President must know this” he said.
He said whereas the convention was organized under the auspices of NRM chapters in Europe, it’s main objective was to enable Ugandans in those countries air out their concerns to government and the party so that they can be worked upon. Some of the issues included duo citizenship, acquiring national IDs, technology transfer, taxes among others. The conference attracted participants from Sweden, Norway, Belgium, Turkey among others.