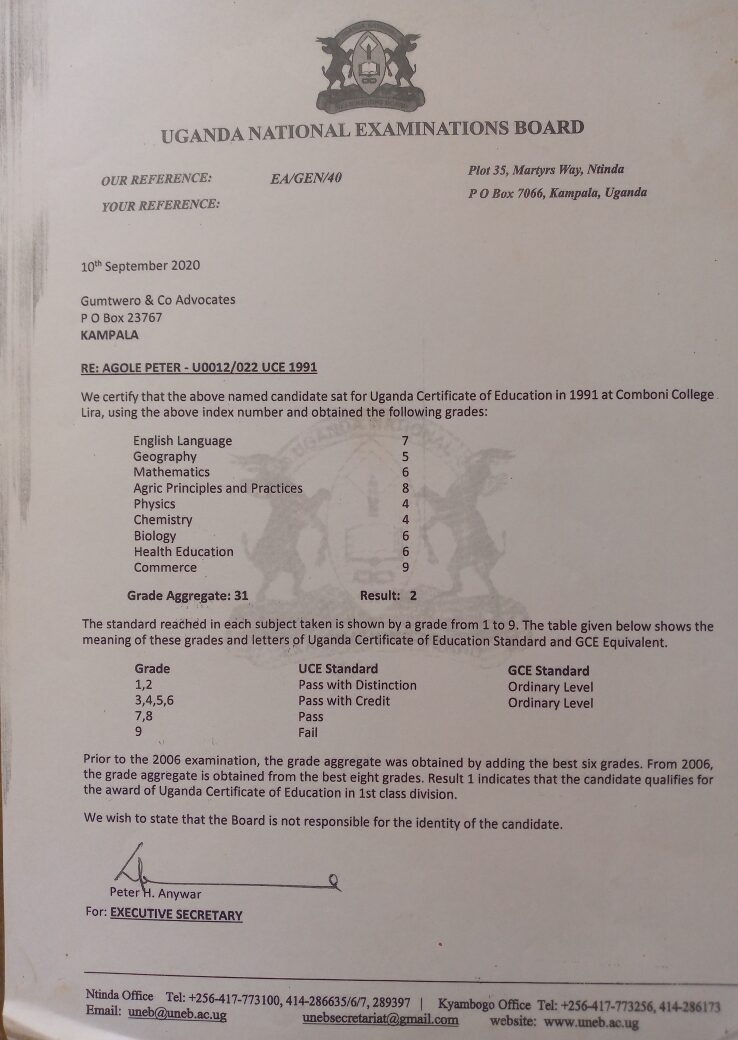 The UCE certificate on which Enume rode his luck

A top Kyambogo University lecturer is sweating plasma after a single act of greed exposed academic skeletons that he had safely kept in his closet for decades.

In a classic tale of sordid betrayal, lecturer Peter Agole alias David Enume is deeply regretting why he selfishly stole a project that his friend Solomon Ongora had entrusted him to superintend while he was away on professional studies in Trinidad & Tobago. As we speak now, Enume is now desperately clutching on the last straws in his sight as he fights to wiggle himself out of a fake academic papers scandal that was exposed by his acts of greed.

Investigations done by our ever alert Inspectors trace Enume’s troubles to his failed attempt at completing his O Level education at Comboni College, Lira, in the early 1990’s.

Sources intimated to us that after completing his primary level education from his home village of Bala in present day Kole district in 1987, the then Enume David joined Comboni College in 1988 with his friend and village mate, Peter Agole.

However, Enume quickly bit more than he could chew after his youthful heart was warmed by a village belle named Beatrice Tino from the neighboring Ayer village. And to fend off other male competitors, Enume chose to quickly take Tino’s hand in marriage while in Senior One. He would, however, soon vindicate the ancestors who warned that no one can serve two masters at ago when family pressures and responsibilities quickly outweighed his attempt to study. He thus dropped out of school in Senior Two the following year (1989) to sink himself into earning a living for the family’s betterment.

To sustain the family, Enume took on fishing and fish mongering business, plying his trade from Namasale and Nambyeso landing sites on Lake Kyoga and Kwania respectively.

We have established that once Enume’s bedroom prowess resulted in human additions to his family, life in the village became untenable as he could no longer afford to guarantee his dependents enough basics of life. He subsequently mooted an escape route to the city where he would be guaranteed a share of the Golden Fleece!

Trouble though was that by that time the surest passport to any job was at least a UCE certificate.

They say wherever there’s a will there’s always a way and the same applies to Enume. Amidst his struggles, Enume remembered that in Agole Peter, he had an old friend with whom they had started on a journey to read books which Peter actually completed as Enume read in-between Tino’s irresistible thighs.

He therefore approached his OB Agole who agreed to lend him his O Level certificate so that he could use it to secure a job. And armed with this important document, Enume secured a job of a security guard at the then Uganda Polytechnic Kyambogo- UPK (which was later merged with the Institute of Teacher Education Kyambogo- ITEK to birth the current Kyambogo University.

From that time life completely turned for Enume that he forgot all about what troubled him earlier — including his old name (as he opened a new chapter of life in Kampala as Agole Peter).

From his early fishing errands, Enume mastered the art of seizing opportunities as soon as he sniffs any. We have learnt that after working for a few years at UPK, he learnt that the institution allowed staff who wished to further their education to enroll and do so. So using Agole’s certificate, he, in 1998, enrolled for a certificate in Mechanical Engineering Craft Practice 2. By coincidence however, at that time the original Agole had also moved to Kampala and enrolled for A Level at Kyambogo College School. They thus used the same O Level certificate to sit for their respective higher exams.

Afterwards, the two friends continued with their education. Records obtained by The Inspector show that while Agole Original pursued a medicine and surgery degree at KIU Western campus in Ishaka and graduated in 2016 vide Reg. No. BMS/0232/102/DU, the fake Agole (Enume) pursued a diploma in Mechanical engineering. Enume still emulated Agole by further pursuing a degree in Mechanical Engineering at Kyambogo University, after which he registered with the professional engineers’ body as a certified mechanical engineer. For this academic effort, Kyambogo quickly elevated him from the security department to the educational department where he became a staff of the Mechanical & production engineering Department.

They say all good days come to an end sometime, and indeed, Enume’s bad days began the day he registered with the professional engineers’ body. While this easily passes for a milestone on his part, it spelled doom for the genuine Agole. We have established that upon finishing his medical degree, the newly graduated Peter Agole took his papers to the Uganda Medical Council to register as a certified medic. However, he quickly turned into the Lango version of foolish Esau who sold his inheritance after the system rejected his O Level certificate because the same exact document had already been used by someone to register as a certified engineer.

Subsequent attempts at the same process proved futile hence throwing Agole into deep frustration. Left with no choice, he resigned to fate and relocated back to Lango where he established a drug shop at the Lira main market.

Meanwhile, back home Enume continued to flourish in his newfound inheritance when he crossed paths with prolific researcher Solomon Ongora of the multibillion Liquid Smoke project fame.

Still sensing an opportunity to make a quick buck, Enume aka Agole hijacked the project when Ongora left him in charge of it while he was away on a four-month scholarship. However, the ensuing fallout sparked off a nasty court battle which exposed Enume’s shady academic secrets thus leaving him a haunted man full of regrets as we speak now.

NB: Watch this space tomorrow for details of the sordid betrayal and court proceedings which have left Enume on the verge of becoming a ‘graduate P7 dropout’!! 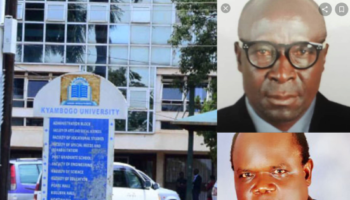