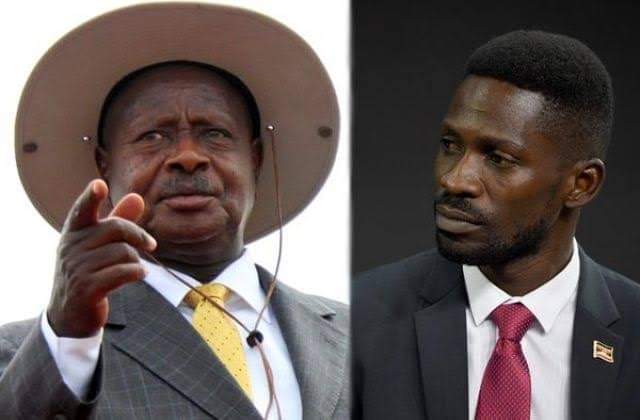 The singer turned musician made the remarks during an appearance at local Television channel, NTV. The remarks came barely a day after the president made a speech that was a complete turnaround from the hardline stance he had lately adopted just before and after the January 14th general elections that saw him win a sixth term in office.

It is worth noting that in the vey recent past, the President had adopted a tough demeanor which saw him severally praise his security men for clobbering mainly opposition politicians and their supporters for attempting to destabilize the peace ushered in by the national resistance army fighters. Branding such people as terrorists who are trying to overthrow his government through violence and intimidation, the president has always vowed to unleash the brutal force of the country’s robust security apparatus led by the “Original National Resistance Army” to subdue any such elements.

Precisely, the president was non-apologetic last August when he praised his men for decisively dealing with Bobi Wine during the Arua fracas of 2017.

Museeveni noted that he had received reports that Bobi Wine had been thumped badly by security people in a manner that violated his rights. However, the president revealed that after watching the footage, he observed that the (then) MP had been beaten properly. He thus ordered for the release of the pinned officer who had been put up for prosecution over the said beatings.

“And then they said ooohhh!! Member of parliament was beaten! Well, I said let me study how he was beaten. Noow, when I studied, I found out the man had been beaten properly in the right way; so it was in order.  They had actually tried to punish the boys but I said no no this is rubbish, it was the other people who were in the wrong,” Museveni who was clad in military fatigue said.

The president would repeat the tough call while delivering his victory speech immediately after he was declared winner of the 2021 general elections.

The president’s remarks followed that issued by then security minister Elly Tumwine who had justified the violent November 18/19 security crackdown of riots that followed the arrest of NUP presidential candidate Bobi Wine. In fact Tumwine had gone on to proclaim that the police has the right to kill you!”

Tumwine’s support of the brutal force by security was galvanized by his commander-in-chief who branded the rioters terrorists whose intrinsic mission had been burning kampala so as to make the city ungovernable so as to take power by violence. He however promised that people who had been killed innocently as collateral damage would be compensated.

On Saturday however, the president was completely a different communicator, taking the entire duration of his address to caution security personnel against beating up or torturing the citizens.

“Don’t beat people, don’t beat members of the public, don’t even beat criminals. You’re not allowed to beat anybody; not even the children… nobody should beat any Ugandan,” the president said. Clad in his now trademark white shirt, Museveni actually directed his men not to even bark at Ugandans but handle them with respect and professionalism.

The president also emphasized the need to uphold human rights and it is not surprising that the address comes at a time when the Ugandan security forces including the police and army have been named at the forefront of perpetuating human rights abuses in the country.

Following the change in approach, many people took to various media platforms to express their shock, with many opposition politicians reminding the president of his earlier tough stance. Among these was NUP supremo Robert Kyagulanyi who claimed that the president was acting On pressure from the citizens as well as outside forces.

“He is shaking because of the pressure coming from the citizens and the international community,” Bobi Wine said.

Bobi then went on to react to other comments including that of the president branding NUP a terrorist-like organization trying to resurrect Kabaka Yekka (KY) party whose agenda was advancing the interests of the Kabaka and Buganda as a tribe. To this, Bobi wine denied being tribal, saying he unfortunately cannot apologise for being proud of his heritage.

“They want to make me feel sorry for being a Muganda. I’ll never apologise for who I am,” he said.

The President’s address also created a buzz on social media, with many notable people making sense of it in varied ways.

On his part, Lord Mayor Erias Lukwago of the opposition FDC party echoed Bobi Wine’s sentiments, guessing that there could be a force that forced the present to be repentant. He posted: “The Igbo of Nigeria have a saying that a frog will never be seen hopping in the middle of the road in broad daylight save for situations where it is being chased. General Museveni talking about the country’s appalling human rights record sounds strange!!…one wonders whether it has just dawned on him that the nation is bleeding.”

Meanwhile, NUP’s spokesperson Joel Ssenyonyi posted: “Chief, you have previously supported the killing and beating of people in Arua, Kasese and Nov 18/19 and on several other occasions. Now that you say you’re concerned about such acts, can we see you taking action against the perpetrators?? Or is this the usual talk to just play to the gallery without intending to take any action!”

And NUp MP Abadallah Kiwanuka said, “Short of arresting Gen. Elwelu, your address to the nation regarding human rights violations is empty.”

Other Ugandans reacted to the speech as follows:

Dani: “There must be something the Mzee is trying to distance himself from, just keep tuned in the near future and see.”

Golden Markshine: “Isn’t this the same man who came out to praise his men for a good job done after the November 2020 killings?”

James: “Really he promoted Elwelu who murdered people in Kasese now he is against it?

Rachael: “Mzee it’s better you stay silent because that way people think that maybe you’re not aware of what’s transpiring in the nation and therefore stay hopeful but the moment you speak moreover portraying that you’re aware of the atrocities most of us become hopeless because Ugandans have endured them for decades.

Others however, were happy that his earlier stance notwithstanding, the president deserves praise for coming to the rescue of Ugandans.

Responding to Ssenyonyi’s thread, a one Genero posted: “So if he comes out to condemn human rights abuses, where do you find a problem with that? Would you feel happy if he said he’s going to do nothing about it? Given the fact that he is ready to rectify the mistake, then u should welcome the idea, not just criticizing for the sake of it.”

Kobusinge: “The president has talked. If you don’t want to believe his words you wouldn’t have followed even. You can go and listen to your own president.

Brian: Senyonyi this is not eating money, this is security issues, just sit in your Office and wait for your salary.

It should however be noted that this is not the first time the president is lambasting the security for mishandling Ugandans. Recently, the president apologized for tactical mistakes that the suppressors of the November 2020 riots committed, promising to give a better deal to Ugandans including compensating all those that lost their loved ones. This happened shortly after the BBC released their damning documentary titled ‘The three killings in Kampala’. In the documentary, the BBC sought to shed light on who exactly shot the people who lost their lives that day. Indeed, the shooters turned out to be security personnel who were patrolling the streets on police patrol truck NO. 17, Reg no. UP 5567