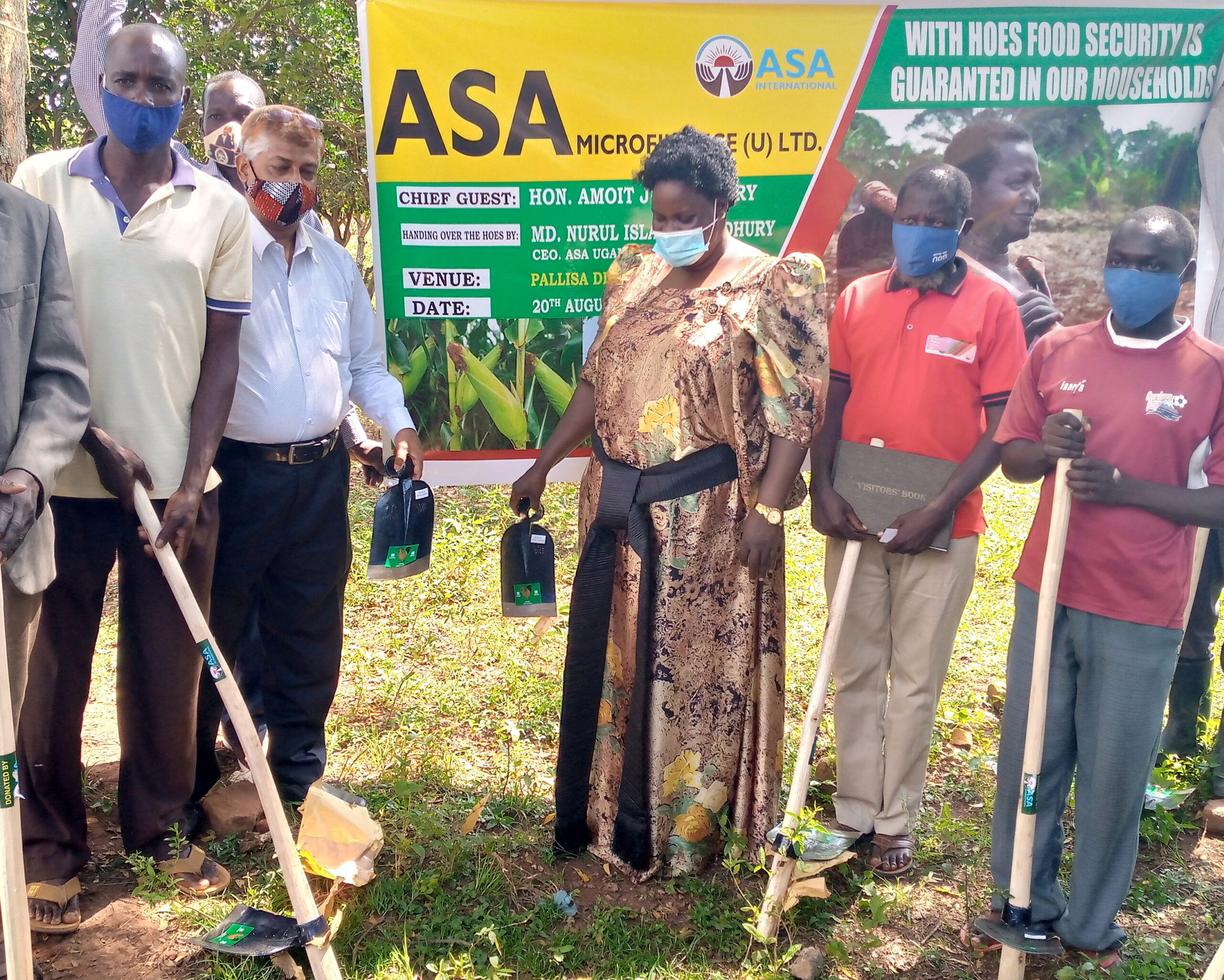 Judith Amoit the deputy chairperson of citizen and immigration control board on Tuesday got appraised by the community of Boliso 1 sub county in Pallisa district for lobbying of hand hoes from ASA microfinance (u).

ASA microfinance delivered 200 hoes for women and youth in the newly created sub county which was carved out of Putiputi.

Joseph Okware, the LC1 chairperson of Amusiat, said President Museveni merits recognition in his endeavors to wipe out poverty from Uganda when he allows foreign investors to come to Uganda.

Okware said the appointment of Judith Amoit the former Pallisa Woman Member of Parliament from 2011 to 2016 to the position of deputy chairperson Citizen and Immigration Control Board has benefited Pallisa at the grassroots.

Area LC3 chairperson of Boliso 1 sub county Richard Otwao who received the hoes together with LC1 chairpersons said the donation was well-timed as the second rains are on after a long spell which burnt crops in the gardens.

Otwao said the hoes are primary tools in any agricultural undertaking which the beneficiaries are proud of.

“Hoes at the open market here in Pallisa are at Shs10,000 to Shs12,000 and if somebody gives you a hoe he is better than one who offered you over 100,000 because even when a person goes for casual labour using a hoe he or she makes not less than 5,000 a day. So I’m happy to Amoit and ASA Microfinance for supporting mostly women who are the targeted beneficiaries,” Otwao said.

Peter Opam said Amoit is a rare leader because when people of Kibale County denied her opportunity to serve them she remained with the people and is still lobbying for them.

“Most people when president Museveni appoints them after losing an election look at their voters as enemies and when asked for any help refer to the elected leader in office”, Opam said.

Nurui Islam Chowdhury alias Mafique, the chief executive officer of ASA microfinance (U) Ltd, said this is part of their Corporate Social Responsibility to give back to the community they serve and that consumes their products.

“I’m glad for Amoit. She is a very cooperative woman and has made us settle down to do investments here in Uganda, so when she asked for help for the people of Pallisa I came and delivered these hoes,” Mafique said.

Mafique said they give out hoes to the community so that they are sure of food security. Amoit asked people to put aside politics in issues of development because most of them have started thinking that such hoes giving projects are aimed at political intentions.

“The current Member of Parliament for Pallisa is Kevin Kaala Ojinga and she has to serve for five years but that does not stop me from helping people. This is time for development and not politics. I was only for President Museveni so don’t deviate,” Amoit said.

Stella Kataike, one of the beneficiaries, said the stress she used to get of borrowing money from local groups that charge interest of 20% is no more since ASA Microfinance came to Pallisa with its small interest ranging from 7% to 12%. She said she can borrow to the tune of 300,000 for four months.