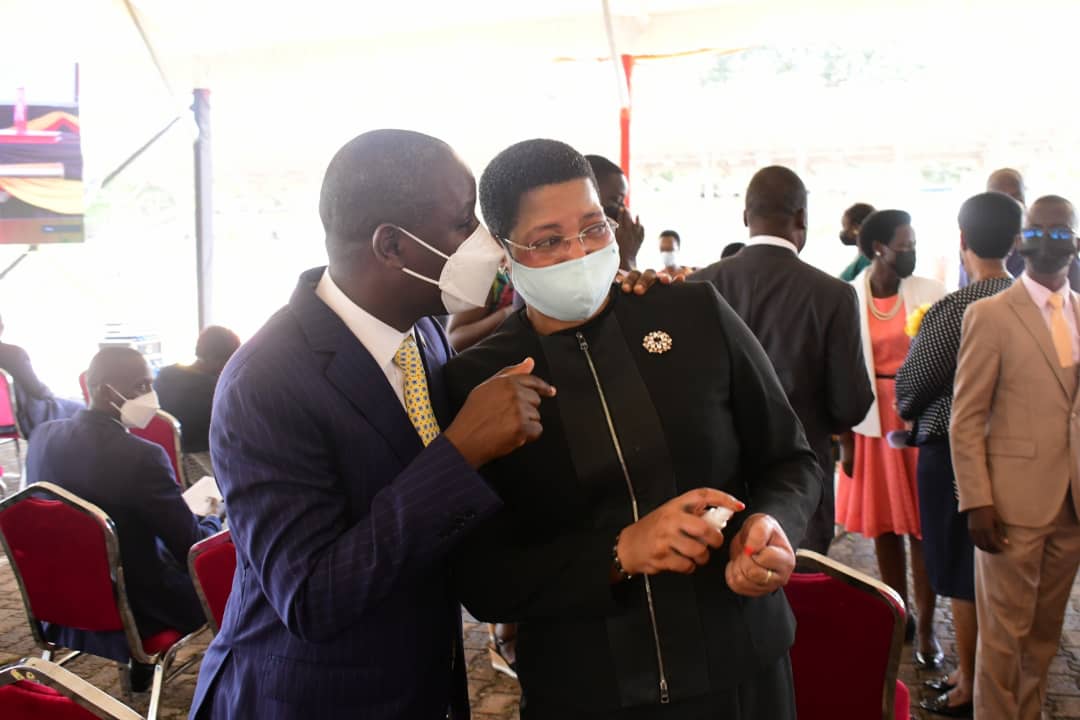 A love triangle involving three legislators two of whom are male ministers is threatening to explode in the parliamentary chambers.
The two ministers as we speak are reported to be involved in a secret financial race as they try to outsmart each other to regain access to the ‘nuclear weapon’ of one of the juicy female legislators.
What is sad though, is the fact that the female legislator is reported to be bitter with both ministers having dumped her also shortly after she lost her MP bid in 2016. We are told the bitter female legislator is now considering dragging the dark-skinned male ministers to the speaker of parliament Rt. Hon. Anita Annet Among accusing them of stalking her and trying to kill off her appetite to attend house proceedings.
“They keep sending me people, sending me kits. I am fed up. Let them feel it also. Where were they when I was grassing? They are joking” an inspector quoted the gorgeous legislator as fuming!

Sometime in the 9th parliament, this equally dark-skinned female MP was one of the beauties in the house. A member of the parliamentary netball team, the gorgeous legislator allegedly ‘signed’ a Memorandum of Understanding with two (each on his own) male legislators who were also members of the parliamentary football team.
None of the male MPs in question however, (both have since been appointed to cabinet) suspected the other of having similar rights to the MP’s nukes but decided to play it cool!
One day, the EA inter-parliamentary games took place in Arusha and the love triangle legislators were part of the team. On reaching Arusha, each member bought a new sim card and gave the juicy female MP for ease of communication while in Arusha.
“The MPs kept buying eats, drinks and more eats. The female MP crushed whatever was bought for her and even hired mercenaries to help her clear the trays. She eat and eat. She wanted to drain them but guys kept pumping money. She managed to juggle both of them for the whole of the 9th parliament term” says an Inspector.

When 2016 polls took place, the female legislator could not believe her eyes as the votes denied her. She therefore lost her bid and started grassing.
However, like the old adage goes thus ‘when you see a mouse smiling at the cat, then you know a hole is nearby’, this gorgeous MP never consoled herself for the loss. She said to herself that, after all, I still have the contacts of my two ‘lover men who by the grace of God, had even been appointed to cabinet!
“She picked her phone and tried to call one, but he refused to pick. She called another member, he also didn’t pick. She called, twice, thrice until none of them picked neither did they return the calls until the term ended. She got annoyed at the behavior of the (now) ministers” explained an inspector.
Upon realizing that the MPs were simply hobnobbing with her because of her former status as MP, she decided to delete all their lines and chose to secure her future by camping on the ground.
True, her efforts finally yielded fruits and she made it back to the 11th parliament chaired by speaker Anita Among!

We are told the female MP is now faced with a challenge of deciding on whether to reconsider a request by both ministers to reopen her nuclear arsenal for fresh inspection by the player-ministers or move on with her life as she looks for another expert to fire up her arsenal.
Apparently, the ministers have spent the whole of this financial year amassing wealth in their sectors as they try to launch a serious ‘attack’ on the MP just like Russian forces did to capture Ukrainian region of Donbas!
The first point of artillery they are employing is to invest in personal administration by buying expensive suits for themselves to look smart and appetizing!
Secondly, the male ministers we’re told are now regular at parliament not wanting to miss any plenary proceedings as they want to have an eye contact with the dangerously gorgeous babe from Eastern Uganda.
One of the ministers we’re told has even made it a point that he arrives early for the sessions to have a front seat while the other arrives in the middle of the proceedings in order to attract the attention of everyone including the female MP during the proceedings.

As for Local Direct Investment (LDI) in the female MP, the two dark-skinned ministers who appear in a summary form (one) hails from Eastern Uganda and another from Northern Uganda. They are allegedly making two fronts of attack with each employing his tactics!
One of them has assigned another female MP from Eastern Uganda who is a friend to the gorgeous babe to deliver his message to his target.
The other minister we’re told has decided to give a blank cheque to the gorgeous legislator asking her to name her price just for the sake of rekindling their relationship.
“I don’t know why honorable…. dumped me. I really can’t tell why. I have done everything possible to bring her back, but she’s still bitter with me. I have sent people to ask her tell me what she wants, but she not taking any of my pleas” explained an inspector close to the minister.
As for the other, he has invested heavily in sending emissaries to the gorgeous legislator but the emissaries seem to be smarter than he thinks.

“They keep feeding him on lies as they drain his wallet. The other day, he sent her money to go and greet her voters but it wasn’t delivered. And the guy fears to approach the MP” says an Inspector.
Out of this approach, we are told the gorgeous legislator recently told off one of the female emissaries to tell the randy ministers.
“Do they think I am a fool? They need me when I am here. When I lost my seat, where were they? They all switched off. They didn’t want to associate with me. Now they are are asking for my love? I am not a full. Men should learn to respect women” an inspector quoted a bitter lady ad fuming.
In fact, we’re told the lady is thinking of tabling the matter before the speaker of parliament or the prime minister if the ministers don’t style up.
However, the emissaries who are in effect benefiting heavily from this situation keep pestering her to keep the ministers on ‘kameeme’ (waiting list) as they are still enjoying their ’emyooga’!

During the 8th parliament, two ministers also from Eastern Uganda traded brawals over a female MP from Eastern Uganda.
One of the male MPs hailed from Busoga and another from Bugisu sub-regions. The female MP also hailed from the Bamasaaba land.
It so happened that the Mugisu minister was the first to access the rights of oil exploration from this female MP and even went ahead and sired a kid with her.
However, midway into their relationship, the female MP decided to grant similar rights of oil exploration to another Musoga minister as she hunted for ’emyooga’ to try to reclaim her Parliamentary seat in 2011.
The news of her new catch landed in the ears of the Mugisu minister who immediately put both cheating MPs on surveillance system!

Somehow, he got a brief that the two lovebirds would hold their ‘face-to-face’ sessions somewhere in Iganga town in a popular hotel (names withheld).
As such, the minister recruited a number of spies and planted them along Jinja-Iganga high way almost up to Namutumba!
“He recruited chapati men and planted them around the hotel. The boys were given a picture of the two cheating MPs and were asked to ring his hotline the moment they saw the couple. One day it happened” says an Inspector!
We’re told when the minister was informed of the couple’s presence in the hotel, he drove his car at 200km per hour and oh, yes, he nabbed the couple in the hotel.

“Oh, it was terrible. It was terrible. The minister cried in Lugisu as and we thought he had been possessed. He cried as if he didn’t have a wife back home” explained an inspector. From that day, the Mugisu minister cursed the couple and even travelled to Mombasa for super natural powers! His actions seem to have worked as the two cheating MPs lost their subsequent elections in 2011 and started grassing although the cheating minister has since returned! As for the female MP, she can’t even afford hair shampoo the reason she trimmed her air!
Watch the space!