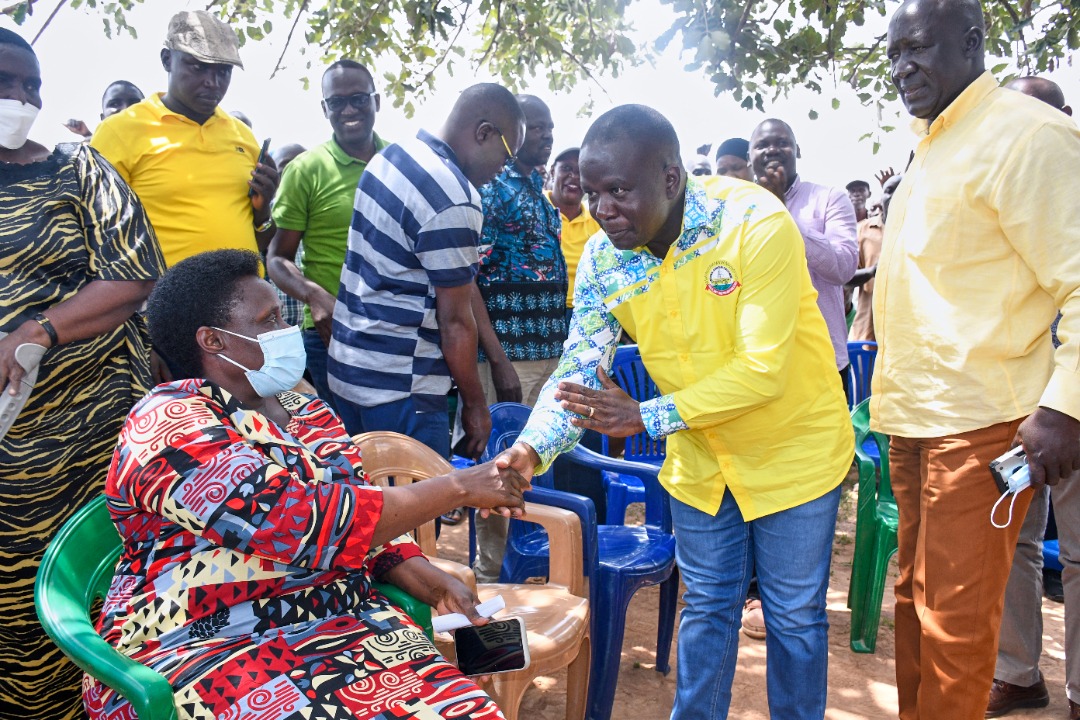 VP Alupo talks to Ariko at a rally in Soroti

Untold secrets on how the Vice President Maj. Jessica Alupo performed miracles that saw NRM’s Herbert Ariko trounce FDC man Attan in Soroti City East by-election have leaked to us. It has come to our attention that NRM initially had concluded that it was going to lose only for Maj. Jessica Alupo, the Vice President to come in and employed skillful tactics that finally bore fruits.

What however many may not know is how the NRM Party managed to pull off this win considering the fact that Soroti City is largely an FDC stronghold.

For instance, the Soroti City Woman MP, Joan Alobo, Soroti District Woman MP, Anne Adeke, Mayors of both divisions are all members of the FDC Party. Soroti City has traditionally voted for FDC for the last 20 years.

According to Inspectors in intelligence, prior to nomination and immediately after nomination, the Forum for Democratic Change Party’s candidate, Moses Attan was leading in opinion polls. This was made worse by Mike Mukula’s utterances describing Patrick Amuriat Oboi, FDC’s Party President as an impotent man unable to sire a child. Mukula was at the time heading Ariko’s campaign team since the NRM’s Secretary General was out of the country in Germany.

Inspectors revealed that two weeks before the election, President Museveni received intelligence reports that the NRM Candidate was heading for an outright defeat: The main reason being that the man leading the campaign team was very unpopular.

The President was briefed that Mukula was unpopular even amongst NRM Party leaders in Soroti City. NRM Party honchos such as the district’s Party Chairman, Charles Elasu, Teso NRM Sub region mobilizer, Teddy Acham, Abdul Latiff and many Local Council Chairpersons were not in agreement with Mukula and had therefore abandoned campaigning for Ariko.

Reacting to this Intel, President Museveni dispatched the Prime Minister, Robinah Nabanja, Lydia Wanyoto, Minister of State for Karamoja Affairs, Agnes Nandutu and some other Ministers. This move also backfired with many voters shunning the team that they saw as Bantu who did not understand their problems.

Intelligence again picked this information and relayed it to President Museveni with a week to Election Day.

Being the Sabalwanyi that he is, President Museveni immediately deployed his Vice President, H.E Jessica Alupo to reorganize the campaign team. Alupo who had herself shunned the campaigns because of Mukula then drew up a team that had Sanjay Tanna, General J.J Odongo, Minister Musa Ecweru, Hon. Akello Rose Lilly, Minister in Charge of Ethics and Integrity, Hon. Sidronius Opolot Okasai, The State Minister of Energy and Mineral Development, Hon. Hellen Asamo, the Minister of State for Disability Affairs, the State Minister for Teso Affairs Minister, Dr. Ongalo Obote and other Teso MPs.

The Vice President is also credited for bringing on board Hon. Bosco Okiror, the Usuk County MP and Chairman Teso Parliamentary Group. Okiror had before shunned the campaigns because of differences with Captain Mike Mukula,

Alupo deployed her loyal troops in a manner that we are relaying hereunder, resulting into Mike Mukula’s eviction from active campaigns!

Central Ward Known to be the most difficult for NRM was assigned to Gen. JJ Odongo and Sanjay Tanna, a renowned businessman in the region including Soroti City where he runs a string of businesses including but not limited to Tbs Radio, MTN Distribution, and Nile Breweries Distribution. Gen. JJ too, runs a line of businesses here with numerous buildings.

Inspectors further suggested that it was these segmented meetings that broke ground for NRM in Central and Pioneer Wards.

Meanwhilethe the tactical Vice President deployed Dr. Ongalo Obote to woo the Kumam speaking community, a big voting block in Soroti City and the State Minister for Fisheries, Hellen Adoa was tasked with delivering the votes from Akisim Ward.

The notorious Camp Swahili was assigned to the equally no nonsense Musa Francis Ecweru, Aloet was delivered by Sidronius Opolot Okasai, the State Minister of Energy and Mineral Development.

The soft-spoken but calculative Alupo then instructed the State Minister for the Disabled, Hellen Asamo to deal with Persons with disability while Rose Lilly Akello (state minister for ethics) wooed the Karamojong voters.

It should be noted that the Vice President also ensured that Security did not disrupt campaigns despite the FDC supporters breaking all the traffic rules during their mega processions.

“The only scuffles that were witnessed happened on the night preceding the elections where a number of FDC leaders were arrested for allegedly violating electoral laws and on Election Day” says an Inspector.

Shockingly, while Alupo’s tactics were tilting the fortunes in favour of NRM, parallel NRM Campaign structures were busy blackmailing her team. Inspectors stated that one such a team was loyal to Mukula and allegedly kept holding meetings with him at his residence, another at Soroti Hotel, and the third headquartered at Hursey Resort Hotel. The plots however, bore no fruits as the VP’s tactics seemed to be more superior and hence delivered the much-desired victory which brought smiles on Gen. Museveni’s face!

DO OR DIE AFFAIR

Top Inspectors in the NRM intimated to us that President Museveni’s interest in Soroti City is a strategic move to have NRM sweep to victory in 2026 in what is classified as ‘Bull Horn Strategy”.

Bull Horn Strategy is President Museveni’s latest political strategy following the fallout with Buganda. It should be remembered that Buganda was until the 2021 general elections Museveni’s stronghold until NUP came up and changed the tide.