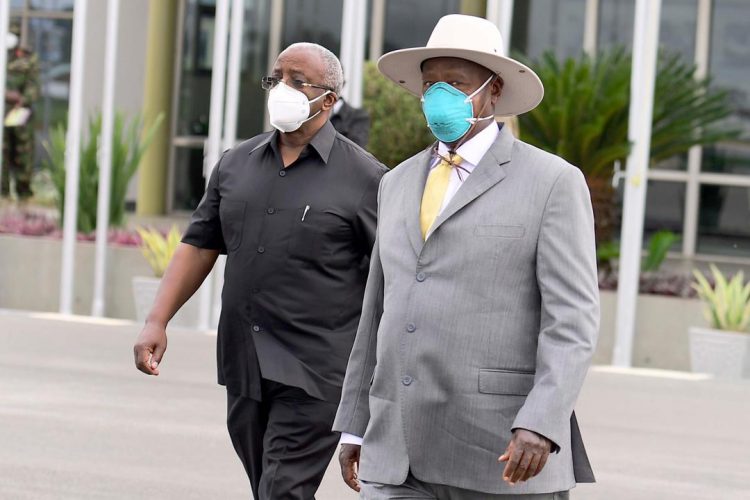 The appointment of former prime minister John Patrick Amama Mbabazi as Head of Global Africa Security Foundation (GASF) has sent shock waves to many Ugandans mainly the political class.Many people thought that Mbabazi was to make a return to government possibly as a prime minister but this has not happened. Instead, he has been sent to foreign service. Hereunder is why.

READ ON
Just recently, Gen. Museveni posted Amama Mbabazi as his special envoy to South Sudan and IGAD. When this news came, we’re told some of his former allies in government sent him messages congratulating him upon this ‘mega’ appointment.To their shock however, according to our Inspectors, Amama allegedly responded in a rather bitter tone.”Congratulations for what?” We are informed Amama seems not to have been in high spirits to take up that job which he was given.”It seems the job didn’t excite him. He didn’t like it. That’s why even when we; his former allies sent him those congratulatory messages, he answered with a seemingly heavy heart” says an inspector who spoke to him upon that initial appointment!To make matters worse, Inspectors revealed even when he tried to execute his duties, some of Gen. Museveni’s trusted contacts in the IGAD arrangement were still skeptical sharing a lot with him for fear of annoying their pal, Gen. Museveni.”Amama stood against Museveni and these people didn’t know at what level their reconciliation reached. Did they totally reconcile or it was a political reconciliation? Many contacts weren’t sure of this reconciliation to fully work with Amama” a top inspector said.We are told as all this happened, Amama allegedly kept reporting his challenges to the Commander in Chief explaining to him how the field was getting hilly.”The president kept telling him to push on. He said he was going to answer him but he wasn’t specific on what and when” an inspector revealed.And yet, Amama’s former pals kept bombarding him with messages especially former MPs asking for opportunities now that the former premier was back to the NRM fold and was very good at fixing situations.Amama we are told kept quiet most of the times he was faced with such messages. However, when tickled further, he would respond saying ‘you know our boss (read Gen. Museveni) doesn’t want to talk much (his plans)’This level of secrecy Museveni exhibited allegedly kept Amama guessing and we are told he kept most of his time on his phone hoping to receive good news from plot 1 State House Entebbe.The good news finally came when he was told he was accompanying Gen. Museveni to Dakar where Museveni alongside other presidents founded the GASF and he was appointed as it’s head.”His appointment now brings confidence to Museveni’s contacts to fully embrace Amama. They need to start working with him unlike in the past when they had some fears since Amama stood against Museveni. Museveni has now emboldened them to trust Amama” an inspector stated.Other observers however, suggest that by posting him to foreign service, Gen. Museveni wanted to tactfully keep him away and keeping him engaged.Contacted for a comment, former minister for internal affairs Sarah Kiyingi said she wasn’t surprised Amama and Museveni were back on the same table after their fallout.She said Museveni and Amama fall out wasn’t on principle but on personal grounds.”I am not surprised. That fallout wasn’t on principle but on personal grounds. Maybe one of them promised the other and he didn’t fullfil. These (people) have no principles apart from themselves that’s why when he (Museveni) said (Amama) come back, he went back. You know human beings;…. people don’t have an anchor. They go with the wind and that’s the problem we have as a nation” she told The Inspector.She went on ‘I don’t know what they discussed but my reading is that; Amama, (a person) who stood and within no time you’re back? It means he stood just to flex his muscles to scare Museveni. And now that he sees this isn’t helping him, he had to go back’She wondered which deals both Museveni and Mbabazi might have cracked in this whole matter.”I just saw them moving together. I really don’t know which deals they are striking” she wondered.

AMAMA AT A GLANCE
When he lost his bid to oust Museveni, Amama was reported to be doing badly financially. At the time he was knifed from government on September 8 2014, he allegedly had some trucks that were being hired by Chinese to construct the Northern bypass. However, we were told the Chinese immediately cut off ties with him fearing to anger the president.Amama’s wallet kept dwindling and when his bid miserably failed, Gen. Museveni got wind of it through his intelligence boys.

An Intel came suggesting that Amama wanted to venture into transport business and that he wanted to ferry in some cars. The security men allegedly wanted to frustrate the deal but Museveni asked them to allow him work on condition he wasn’t using his businesses to do political subversion. This is how the two started their reunion. We are told Gen. Museveni also cleared Amama to do business in road construction just as he used to do before his fall out with the man with a hat.The duo would later cement their reunion when they attended the giveaway ceremony for Amama’s niece Bridget who got married to South African first son Andre Rwamaphosa.

The latest appointment of Amama as Head of Global Africa Security Foundation will no doubt cement further their reunion and we are told Amama is been tasked to use it to mobilize for Gen. Museveni those African vital contacts. Museveni has finally dealt with the Amama’s Go-Forward movement threat having already appointed his former allies to top jobs in government. Watch this space!