Suicidal Man throws self under lorry as Ntungamo accident claims 6 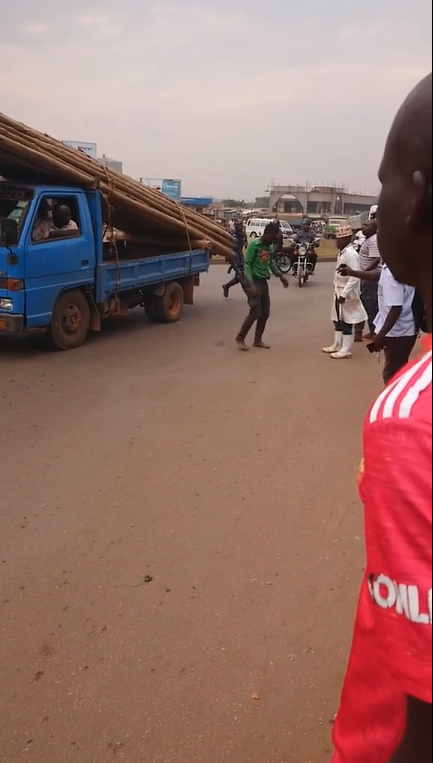 Residents going about their duties at Kalerwe in Kampala city witnessed free drama after a frustrated man tried to commit suicide by throwing himself under a tipper truck.

It is not clear why the unidentified man wanted to take his life but onlookers saved him by alerting the tipper driver before he could roll over him.

Following his close shave with death, unamused eyewitnesses rebuked him and even summoned a nearby police officer who thumped him for his disturbing act.

The man’s suicide attempt is one of such similar incidents carried out by frustrated Ugandans. Recently, police released CCTV camera footage showing pedestrians throwing themselves in front of moving vehicles so as to be crushed to death.

It also comes at a time when the country is grappling with rising cases of suicide and suicide attempts; which experts attribute to a mental health crisis in the country; exacerbated by effects of the cvovid-19 pandemic lockdown. For instance, in November 2022 the Ministry of Education reported that at least 20 suicidal cases were reported among students across the country since January 2022.

The acting permanent secretary Ministry of Education, Ismail Mulindwa blamed them on the outbreak of COVID -19 which exposed both teachers and learners to sexual gender-based violence, family neglect and parental separations, child pregnancies, and forced marriages among others.

Also, statistics from the Uganda police show that every year, the force responds to and process about 535 suicide crime scenes. According to the 2019 Annual Police Crime Report, 456 suicide scenes were processed and 223 attempted suicide cases were reported –signaling a sharp rise in deaths by suicide in the country.

According to Faridah Nampiima, the PRO Traffic and Road Safety Directorate, the carnage happened Friday morning at Rwahi (after Satellite Hotel) along Ntungamo-Kabale road.

An approximate number of 40 passengers whose particulars are yet to be established were rushed to Lotom Health Centre in Muhanga and are under proper management.

Police attributed the accident to reckless driving by the driver of Volcano bus, who, eyewitnesses say was from Kampala side but left his side and was driving from the right where he met an on-coming Oxygen bus from Kabale side whose driver tried to swerve to his extreme left in order to dodge the Volcano bus in vain thus head-on collision.

The bodies of the deceased were all conveyed to Kabale Regional Referral Hospital Mortuary for postmortem.