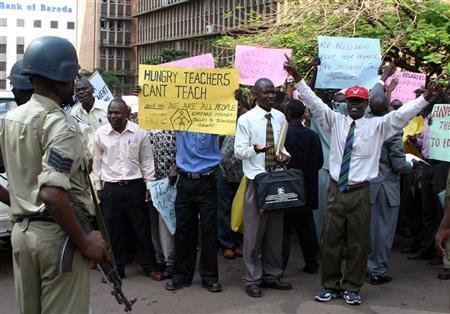 Striking teachers want government to offer them bursaries for the mandatory degree level education level, The Inspector has learnt.

This was revealed by one of the UNATU Mukono district executive committee members in an exclusive interview with The Inspector.

Preferring to remain anonymous so as to speak freely to us, the UNATU executive member revealed that the recently ratified minimum qualification for teachers is among the many reasons why teachers decided to go on strike.

“We want to amplify our voice and be heard because we see the abrupt raise in minimum academic requirements for all teachers as a ploy by government to kick most of us out of the noble profession,” the member said.

The executive added that the matter is among those UNATU intends to put before the minister of education, Mrs. Janet Museveni when they meet her next week Thursday.

A while ago, government through the ministry of education passed a directive requiring all teachers from pre-primary to secondary school level to be bachelor’s degree holders.

This, according to the ministry, would improve the quality of all teachers in both government and private schools.

However, UNATU says that while the directive is good for the educational standards, the requirement is unattainable by most teachers due to the meagre salary that they get.

“Teachers are adults with obligations to undertake both at personal and family level yet they must do the same using the current meagre salaries. That is why we think if the teachers are not helped to comply with the directive many will simply be kicked out of their jobs,” the source said.

UNATU thus wants government to put up a scheme through which teachers will be sponsored to attain these degrees because with the current meager salaries many cannot finance degree education.

“There are only two options: either government enhances our salaries to a level where we can use part of that money to finance our education to its required minimum level or they put up a programme through which to sponsor willing teachers to attain degrees. Thereafter, they can weed out those who would have refused to take up the opportunity, after some time. This is among the issues we are going to tell the minister when we meet her,” the source said.

THE ISSUE AT HAND

Teachers subscribing to the Uganda National Teachers Union (UNATU) commenced their industrial action on Wednesday this week in protest against poor pay.

According to a statement issued by the labour union, the strike involves all primary teachers, arts secondary teachers and those at tertiary institutions except universities.

According to reports, the teachers want government to enhance their salaries to enable them to live a decent life amidst the prevailing harsh economy as well as close the salary disparity which was caused by the recent increase of science teacher’s salaries.

The teachers say they were irked by the president’s insinuation that they are useless to the development of the country unlike their science counterparts yet even the president himself studied arts.

“Maybe the president confuses the political science he studied to be a science course! How come he has ably led this country for all this long if indeed arts are useless like he wants to convince everybody? There’s no way an arts teacher can be getting Shs600,000 per month yet a colleague gets shs4.5m simply because of teaching sciences. We all got the same qualifications and were trained on the same resources,” a teacher fumed.

The strike has been joined by all teachers who have a UNATU code on their pay slips and from whom about shs4900 per month is deducted from their salaries as contribution to UNATU.

Meanwhile, as government grapples with the strike by teachers, local government workers have also issued a warning for industrial action.

The warning was issued under the auspices of the Uganda Local Government Workers Union (ULGWU) in a letter dated June 16, 2022.

As per the letter signed by ULGWU General Secretary, Hassan Lwabayi Mudiba, the strike is slated to commence on Thursday July 7, 2022.

It will be preceded by a meeting by ULGWU delegates at Bweyogerere.