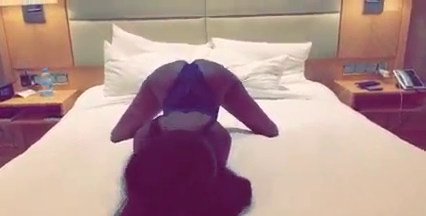 A few years ago socialite Nalongo Judith heard became an internet sensation after pictures of her displaying a ‘bean’ that nearly dwarfs Lwasa’s ‘big pimple’ leaked to the public.

After heated social media frenzy, Ugandans quickly moved on, especially given that Heard was not the first to do so as we had seen other intimate endowments of the likes of Zuena, Cindy, among others.

But like they say, old habits die hard. Nalongo Heard is back on the rumor mill after a new cache of her nudes and videos leaked. In a statement she released moments after the leakage of the raunchy photos and videos, the former model blamed the leak on hackers who went into her twitter handle after she lost her phone.

However, not many Ugandans bought her explanation, with many social media moralists believing she is pulling a stunt to create relevance in this Covid-hit banana republic.

“We shall not fall for your gimmicks. You must have leaked your nudes to get a comeback since you’re faded,” commented one Facebook user. Another one remarked, “It’s okay to lose your phone but why take nude videos and photos in the first place?” it remains to be seen how Heard will wade through the second wave of his nudes; although this time they were served with less show of beans!

Museveni’s Continued Closure Of Schools Is In Bad Faith