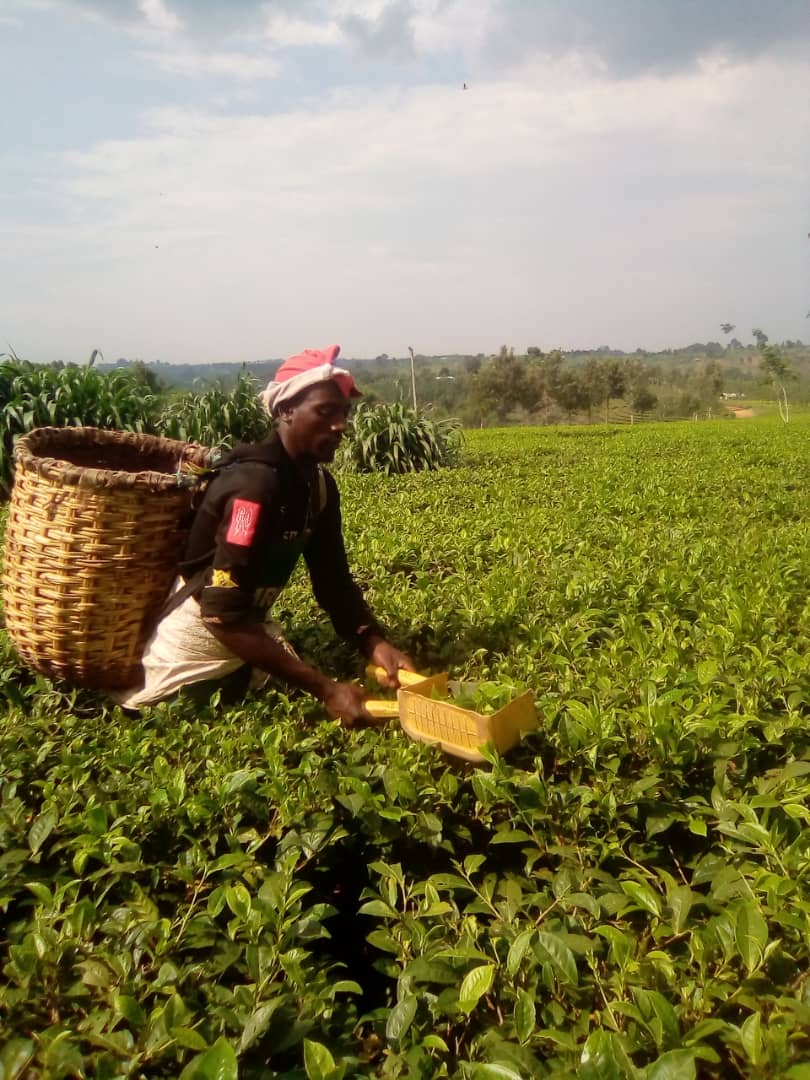 One of the workers Yohana harvesting tea

Tea experts have made a shocking revelation suggesting that Ugandans are more attracted to booze than drinking tea during their leisure time. This trend they warned, is affecting the country’s tea sector revenue as local consumption of tea remains low.
And yet, Tea is listed as a strategic crop in the National Development Plan 3 under the agro-industrialization. Statistics indicate that it fetches between 65-80m USD annually to the national coffers.
In Uganda, Tooro subregion is leading in tea growing with a 39percent share followed by Ankole 29%, Kigezi 12%, Buganda 12% and Bunyoro 9%.

As for West Nile, the same crop has been introduced there and more farmers have embraced it in the last almost 10years.
However, even as the tea growing continues to expand, the people of Uganda according to Tea experts and farmers are contributing less in terms of revenue as they don’t consume it especially when they go for their outings. They instead prefer booze instead of ordering for a cup of tea.

Mr. Onesmus Matsiko, the General Manager of Mabale Tea Factory based in Tooro, says the culture of chilling on tea is common among Arabs but in Uganda, this is currently almost next to impossible.
“The culture of chilling on tea especially among Arabs is there but here, people go for booze. We have a poor tea drinking habit in East Africa. We want to export to other people to drink it” he told journalists in a training workshop on Tea Sector organised by an international NGO-SOLIDARIDAD working with Water and Environmental Media Network (WEMNET) in Fort Portal City.
He said in India and China for example, these countries produce tea and they fully drink this tea unlike in Kenya and Uganda where they produce and little is consumed locally.

To make matters worse, Uganda’s tea sector is hampered by quality challenges. He said whereas in Rwanda the tea is sold at a higher price, Uganda’s tea is sold cheaply because of low quality.
Matsiko attributed the quality challenges to shortage of labour and failure to adhere to scientifically proven procedures of harvesting tea.
For example, harvesting tea is done in what he termed in Swahili as ‘Mbili na Nusu’ or two leaves and the shoot but in Uganda, this procedure is normally neglected as tea pluckers harvest five leaves. He said this is totally different from what Rwanda does as the pluckers insist on Mbili na Nusu’ to maintain quality.

“Imagine we have unemployment in Uganda, but we don’t have people to work on tea farms. The best harvesting is by use of hands but for us due to lack of labor, we resort to machines” he said.
Indeed, Mr. Phillip Okwir, the manager of Kiko Tea Estate said Rwanda has made it compulsory for pluckers to use hands as opposed to machines in order to maintain quality.
“Hand plucking is the best method but it comes with less production or volume. When you use machines, you use a few people to guarantee high productivity. However, in terms of quality, hand plucking is the best. Rwanda government has decided that hand plucking is compulsory. And it says if you use machines, where will people get jobs?” He told journalists at the company’s vast farm in Fort Portal City.

He said as a result of quality harvest using hands, Rwanda’s tea sells at twice the price Ugandan tea sells. Uganda’s tea is majorly autioned at Mombasa-Kenya.
He says harvesting one hectare requires about 12 people and yet when one uses machines, he or she needs only 3 machines to harvest the same.

“Hand plucking is more selective. It’s the best. But the shear (machine) is not selective. Machines pluck for a large piece but hand gives the best quality. If you’re driving for volume, forget quality and if you’re driving for quality, forget volume” he says, adding that when the company tried hand plucking last year, they got good market for the tea but the volume was low.
“We know what ought to be done, but look at the sustainability of the business. We however, try our best to sort the green leaf. When we see it’s poorly harvested, we reject and tell you (farmer) to look for market elsewhere” he said.
Indeed, on the farm was Mr. Christmas Yohana, one of the men plucking tea. He uses a shear to harvest the green leaf. He says when one uses a machine, a kilo is harvested at Shs25 while using a shear he is paid Shs71. He says on a good day, he can harvest about 600kgs.

Okwir says much of Uganda’s tea is sold in Sudan, Egypt, Pakistan, United Kingdom and other Arab countries especially when they aren’t fasting.
To the people of Kabale who border Rwanda, many of them have joined the tea growing business after seeing their neighbors minting lots of dimes from this venture. For example Mr. Mwebesa Julius who’s the Chairperson of Kabale Tea growers and Farmers Association says he was inspired by the good prices and quality of tea in Rwanda. Kabale; having been famous for growing seasonal crops mainly cabbage and irish potatoes, lacked a perennial crop hence a decision by government to introduce tea growing in this area.

Mwebesa says majority tea growers are new in this sector but however, adds that most of them were not properly prepared to embrace the crop. He says many of them thanks to rapid supply of seedlings to them by government, planted farms and farms but are now confronted with high costs of maintaining those farms.
“We face challenges of fake inputs like fertilizer and pesticide” he says adding that the farmers are faced with a challenge of lack of expertise to grow this crop, prices and monopoly of the tea factory as it is owned by a private person.
“An acre gives below 300kgs of green leaf yet it’s supposed to give more than 1000kgs. We also currently lack an association that unites us as tea farmers. We want to come together so that we can face the challenges together” he said.
He said currently, the tea sector is underperforming in areas of production, factories and management but added that when the farmers get organized, they will achieve more.

“Tea is the 3rd foreign exchange earner in his country. It has the potential to fetch us good revenue. As a country we consume less than 30% of the tea we produce here” he said.
Mwebesa lectured to Ugandans that whereas many of then do not pay attention to drinking tea, their bodies are missing out on nutritious elements in it.

“Your body needs tea. It’s a basic food and necessary for your nourishment. But in Uganda, we are affected by choices and yet tea is not associated with problems unlike others like coffee. Tea is not a drug like coffee” he said.
His argument is backed up by Matsiko who says tea is a healthy drink.

“It removes chemicals in the body. It flushes the body system. Actually, tea is a cleanser” he said.
The experience among tea farmers in Kabale can also be cited in West Nile where the crop according to Matsiko was introduced about 10years ago. However, even here, the farmers have no factory. The same happens in Bushenyi where he says farmers poured away tea seedlings because of lack of a tea factory to consume the already existing supply.
“It makes no sense supplying more seedlings but people have no where to sell. West Nile is ready for a factory. There’s no reason why we shouldn’t support them with a factory” he says.

He says the major weaknesses in the sector is lack of a policy, sharing of information, factories and fertilizes.
He however, said efforts to improve on the existing tea policy are underway. He added that tea farmers are also involved in promoting environment by planting trees especially eucalyptus which they use during tea processing. He said a kilo of tea is boiled using one kilo of wood, a situation that puts pressure on Uganda’s forest cover unless tea companies engage in tree planting. He advised that for every four acres of tea planted, a farmer must also plant an acre of eucalyptus for use in processing tea so that forests remain intact.

Meanwhile, SOLIDARIDAD Tea project manager, Alex Amanya encouraged the media to pick interest in the tea sector. He noted that this sector is ‘so closed’ to the public unlike other crops like coffee, sugarcane among others.
“These get a lot of attention. Journalists tend to shy away from the tea sector because I think it’s closed. We want to interest journalists to report the tea sector through trainings and dialogue” he said.

Solidaridad through the Reclaim Sustainability Program aims to contribute to a responsible and inclusive global tea value chain that ensures value is distributed fairly, smallholder tea farmers and workers benefit from decent working conditions, and tea is produced with respect to the environment.