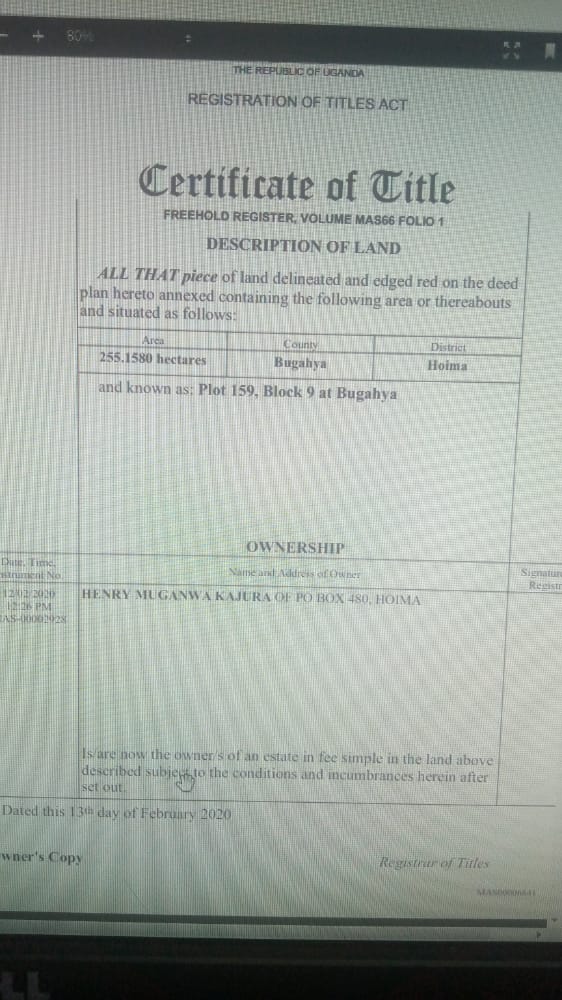 Over 1000 poor people are on the verge of being rendered homeless following allegations of fraudulent acquisition of their land by former long serving Deputy Prime Minister, Henry Muganwa Kajura.

This land grab happened during the covid-19 lockdown, almost at the time government banned land transactions all over the country. According to documents seen by our Inspectors, the contentious land is situated in Hoima district, comprised in Plot 159, Block 9 at Bugahya.

We have exclusively established from documents in our possession that that the land in question measures 255.1580 Hectares (over 510 acres) and covers 6 villages comprised in two Local Council areas consisting of 6 villages. Particulars show that the land is in Kitoba Sub County, along the Hoima-Butiaba Road and encompasses Dwoli East and Kinyara Local Council areas.

Once this land grab grows into an eviction, the people who will be rendered homeless are in the 6 villages of: Wampanga, Dwoli-Masenge, Pesiyoka, Kahoto, Kinyara and Nankulabye.

Highly placed sources reveal that this saga began when, on October 10, 2007, Minister Kajura of P.O. Box 480 Hoima acquired a piece of land adjacent to the contentious land. He thus acquired a title at 11:10am for this land measuring 405.000 Hectares, comprised in Block (road) 9, Plot 7 at Bugahya, Hoima. Later, however, Kajura lost this title and was given a Special Certificate of Title for the same land on September 4, 2014 at 3pm vide Freehold Register, Vol. 474 Folio 6.

From then on, there were no land issues at all in the area as no one objected to the Deputy Premier’s land acquisition. In fact, residents lived happily on the adjacent/neighboring land without any conflicts. We have also established that during the construction of the Hoima-Butiaba Road, locals within the land affected by this project in the villages of Dwoli-Masenge, Kinyara and Nankulabye — right from Kiragura Parish — were compensated without any landlord(s) staking claim of compensation for the same land.

However, the bubble burst last year, when once government lifted the 2020 ban on land transactions, locals realized that Kajura had got a title for the land neighbouring his own land, thus annexing almost an entire Parish as his personal land.

This is according to particulars on a land title registered in the names of Henry Muganwa Kajura of P.O. Box 480, Hoima.

The title shows that Kajura got ownership of this land measuring slightly over 510 acres at 12:26pm on February 12, 2020 while the country was thickly locked in the first Covid-19 lockdown during which government later banned all land transactions. This was upon noting that the land mafia and other speculators were taking advantage of the movement restrictions to grab people’s land and even expeditiously put up developments on it. The government’s move followed incessant outcries by the people who were being finished off by land grabbers.

To this day, locals have tried to reclaim their land in vain. We have however learnt that to successfully engage the powerful Kajura, whose sons are also suspected to be heavily engaged in the scam, locals have since formed an 8-member committee to spearhead the fight for justice for the over 1000 people on the verge of being rendered homeless.

It has emerged that on December 27, 2021, the committee members had their first meeting with the Kajuras. Sources say the meeting attended by Kajura and his wife was chaired by one of his sons. It is said that during the meeting, Kajura was tasked to explain why he got a title for land that doesn’t belong to him yet he has kept quiet and not informed the locals (his would-be squatters) yet the same land is situated along the way to his home at Nyakafunjo Village, immediately after R. Hoima in Kitoba Sub County.

Watch this space for more details to this story 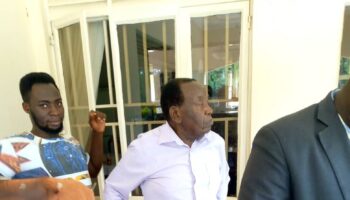