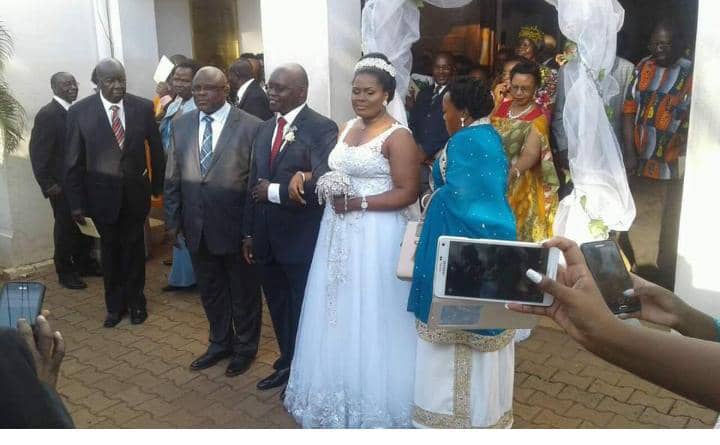 Former state minister for finance, Gabriel Ajedra Ariadru, has filed for divorce accusing his wife of cheating and making him baptize his name a child that does not belong to him. In his divorce petition filed at the High Court Family Division in Makindye – Kampala, Ajedra asserts that he and Elizabeth Aridru profess the Christian faith and got married on January 7, 2017 at All Saints Nakasero and thereafter lived together at Najera, Kira Municipality – Wakiso district. He says they even got two children (name withheld for being minors) from the said marriage. He notes that in 2021, his wife started cheating on him with one Brian Ahimbisibwe and he has found several WhatsApp messages between the two.

“The first respondent (Elizabeth) fraudulently represented to the petitioner (Ajedra) that he was the biological father of the child aged 6 whereas not. Upon realization of this kind of cruelty, your petitioner has greatly been psychologically affected. As a result of the cruelty, the petitioner was forced out of the Matrimonial home altogether and sought shelter at his elder children’s home,” Ajedra states in a petition filed through his lawyers of Arcadia Advocates on September 7, 2021.

He further alleges that his wife’s actions have caused him gross embarrassment, psychological and emotional torture which has ultimately led to the irretrievable breakdown of the said marriage. He thus asks the court to dissolve their marriage, grant him custody of the children and the wife only to be allowed visiting rights.

In reply however, Ms. Elizabeth responded with a cross petition (counter case) laying claim on Ajedra’s property in Munyonyo and the one in Sonde, Kira Municipality and insists that if there is any psychological torture Ajedra suffered, the same was self-inflicted.

“The petitioner (Ajedra) no longer professes the Christian faith. He recently in 2021 converted to Islam preceding his marriage to his mistress Aisha Alibhai,” she stated in her reply and counter-petition filed through her lawyers of Newmark Advocates. This Inspector has established that the said Aisha Alibhai is the former Presenter at K-FM who is currently the Public Relations Officer at National Forestry Authority (NFA). Elizabeth asserts that she has never lived with Ajedra as husband and wife under one roof consistently since he was always never around for most of the days except some weekends when he could visit briefly.

“In specific answer to the contents of Paragraph 7. It is the first respondent’s (Elizabeth’s) contention that she has never been in any sexual or adulterous relationship with Ahimbisibwe and the petition shall be put to strict proof there to. The 1st respondent faked a relationship with Ahimbisibwe in order to get Ajedra’s attention who had ignored her and always referred to her as worthless one he is not afraid to lose,” she said and attached Whatsapp messages between Ajedra and Aisha in which Ajedra was explaining to Aisha Alibhai that the relationship between Elizabeth and Ahimbisibwe was faked. She says Ahimbisibwe is her adoptive brother who was adopted and raised by her biological parents since they were young and the two have grown knowing each other as siblings. She further denies having done any misrepresentation that Ajedra was the father to the elder child. She says by the time the two rekindled their relationship she was already pregnant with the said child and Ajedra was already aware. She further reveals that Ajedra has many homes in around Kampala where he always stayed with his various mistresses and only turned up at the Najjera home occasionally when he needed some company from her, but later sold it and forced them into a rented home in Mbalwa

“In furtherance, Ajedra who is an ex-minister and Member of Parliament later threw the 1st respondent (Elizabeth) and the minors (children) out of the said rented house in Mbalwa-Namugongo rendering them homeless. She was forced to return to her parents’ home in Sonde where she is currently staying with the minors with no support in terms of provision of basic needs for the children whatsoever from the petitioner,” Elizabeth states.

“Contrary to what Ajedra says, it is the 1st respondent who has over the years painfully endured psychological and emotional torture and embarrassment due to his (Ajedra’s) owful and outrageous acts towards her. He has always physically assaulted Elizabeth and he is also fond of verbally insulting her using demeaning and abusive language. He has on many occasions referred to Elizabeth as a worthless individual whom he did a favor to marry as to him no one else is capable of loving or marrying her. However in case the petitioner has suffered what he alludes to, the same is self-inflicted because of his own actions and not caused by or related in any way to Elizabeth,” she says.

She objects to the granting of custody to Ajedra reasoning that he is incapable of looking after or having joint custody of the children. She says Ajedra has on various occasions vabally made it clear that he cannot tolerate staying with the minors in the absence of their mother and has continuously refused to contribute towards their maintenance, school fees and other basic needs.

She admits that the house in Sonde was acquired during their marriage and the title is in the names of the children, however it is “not true” that it is the only property acquired in the subsistence of their marriage before revealing how the house in Munyonyo also belongs to her because Ajedra gave it to her during and after her introduction.

In rejoinder however, Ajedra insists that he was hoodwinked by Elizabeth to believe that Ahimbisibwe was her brother yet he wasn’t and the two are continuing with their “illicit affair in which they echange sexual pleasantries” and the alleged whatsapp messages between him and Aisha Alibhai attesting to a fake relationship “was a set up to hoodwink him. He says Elizabeth lied to him that he is the father of one of the children that is why the child bears one of Ajedra’s names and he only learnt of the actual facts after conducting a DNA test with the said child. He also denies throwing Elizabeth out of the matrimonial home into a rented house saying it is her who disappeared from the matrimonial home and started staying at an unknown location. The court has already set May 12, 2022 to start hearing this petition.

NB: Tomorrow we shall reveal more details about the properties in issue.

Maternal and newborn healthcare transformed through innovations in health facilities